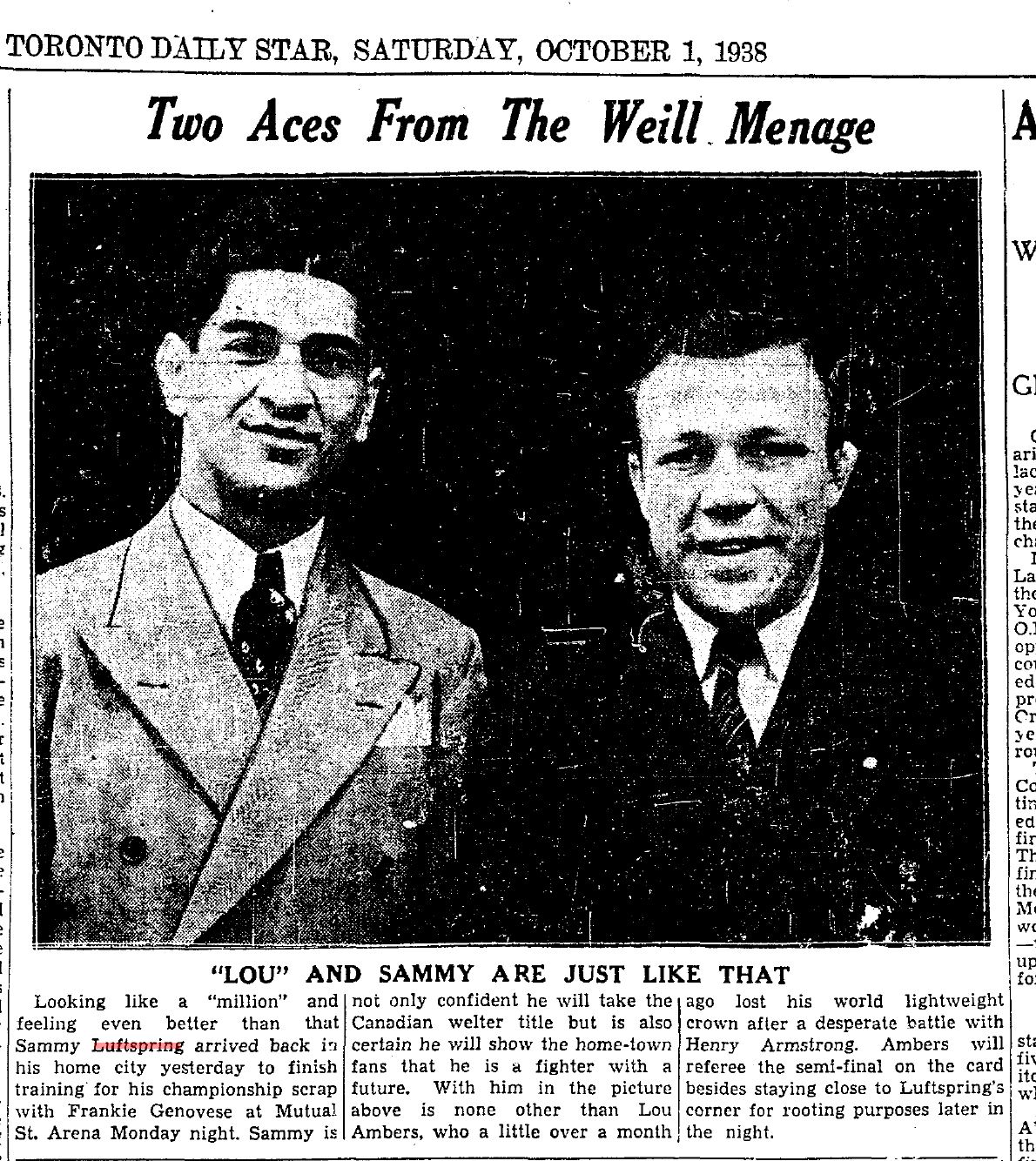 Toronto’s forgotten Mutual Arena hosted one of the most memorable bouts in Canadian boxing history, when Sammy Luftspring, from the St. John’s Ward and Kensington market neighborhoods, clashed with another Toronto homeboy Frankie Genovese for the Canadian welterweight title on October 3, 1938. A throng of 10,000 packed the newly-renovated building to the rafters, as the Italian and Jewish contingents behind their respective heroes, were full of anticipation for an exciting fight – which managed to live up to its hype. The affair was promoted by Playfair Brown, a name too cute for words.

The primary boxing scribe at the Daily Star Joe Perlove had pegged the 24-year old Luftspring as the probable winner, based on Sammy’s higher boxing profile and the fact he had already chalked up victories against Genovese in their two previous scraps (one via decision, the other by TKO). However, the colorful Perlove was less sanguine about how he saw the match unfolding. He figured it would go to a decision with Luftspring using his fancy footwork to notch a win over the game Italian, or as he wrote “that’s no ordinary ticker that beats beneath Genovese’s vest. And we can’t see Luftspring issuing tough tickets to stop the game Italian.”

The Jewish kid had just returned from a 7-victory American tour where he showcased his boxing prowess in Kansas City, Los Angeles, and New York City. And he was now being managed by the highly respected Al Weill ( Marty Servo, Lou Ambers, Joey Archibald, future heavyweight champ Rocky Marciano) and his new trainer was the legendary Whitey Bimstein (Jack Dempsey, Gene Tunney, Jackie (Kid) Berg, Benny Leonard, Lou Ambers, Barney Ross, Max Baer, Primo Carnera, , and Rocky Graziano). Change was in the air. Sammy the slugger was about to replace Sammy the dancer, prancer, and back-pedaling specialist: a combination which his fans never cottoned to.

A year earlier, his opponent Frank Genovese had captured the Canadian welterweight title versus Gordon Wallace, then defended it twice against the Vancouver scraper before relinquishing it January 1938 on Wallace’s home turf. However, once Genovese re-captured the crown on April 01, 1938, at Maple Leaf Gardens, the next order of business was for Luftspring to get a crack at the prestigious belt.
Here’s how Perlove described the action:

“Admirably paced for a long 15-round bout, Luftspring did little but weave in looking for openings in the early rounds. Genovese rushed into a quick points lead due to a flicking left jab that always found its target. There was little steam behind Frankie’s punches however and Luftspring kept weaving in, stalking his prey like a killer of the ring. Genovese tossed everything he had at his man in the early rounds and failed to make an impression but in the fourth round, you could sense the tide definitely turning away from the defending champion. It was here that Luftspring started to find the range with lefts and rights to the body, sharpshooting shots calculated to go to the right places where they would do the most damage. Those murderous shots to the midsection finally took an inevitable toll when the champion dropped to the floor in the thirteenth. A left hook put him down for the first time in the fateful thirteenth and he took a nine-count on one knee while Luftspring waited eagerly in the neutral corner.

Another left and then a right sent him staggering and he was down again this time for a count of two. Game as they make them, Genovese fought back but only the lad’s instinctive fighting nature kept him going. The fans up on their feet were howling for the kill and once again Luftspring tore in with a blistering right that set his man down for the fourth time. Osborne counted to 9 and once again the faltering and stricken champion came up to face his rival. A thudding left banged home and he dropped for the last time. That’s the way the fight game goes: it’s a hard taskmaster. Referee Herschel Osborne put a halt to proceedings and raised Socking Sammy’s hand.”

Everyone expected Luftspring would soon earn a shot at a world title, but cruel fate intervened. A bout with Steve Belloise on May 27, 1940, at the New York Coliseum in the Bronx would mark the final chapter in Luftspring’s boxing journey when a poke in the eye resulted in a detached retina that left him blind in one eye. Meanwhile, Beloise (95-13-3) went on to lose a November 1940 crack at the NYSAC middleweight title against Ken Overlin (136-19-10) via majority decision.

Proud of his Jewish heritage, Luftspring always sported a star of David on his trunks. His career ended at only age 26 with a record of 36-08-0 – never once blemished by a knockout loss.