18 years ago today, Joe Calzaghe found himself climbing off the canvas, this for the first time in his pro career. The reigning WBO super-middleweight champ was fighting Byron Mitchell in Cardiff. Mitchell was, as Calzaghe said when recalling the fight for Sky Sports, “a proper American tough guy.”

Calzaghe was perfect at 35-0 at the time, while former two-time WBA 168 pound champ Mitchell was 25-2-1. Calzaghe had beaten Chris Eubank (to win the WBO belt), Robin Reid, Charles Brewer and others yet he was still some months away from his huge win over Jeff Lacy. Mitchell had beaten the likes of Frankie Liles (to win the WBA belt), Manny Siaca (to regain it) and Julio Cesar Green. 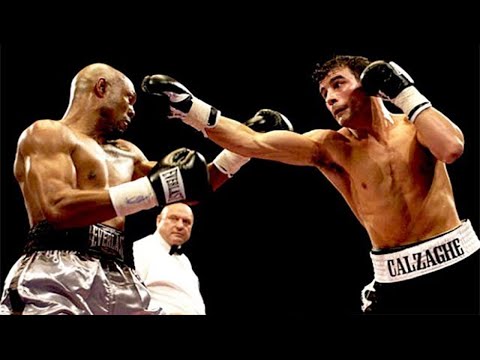 This was the toughest test yet for “The Pride of Wales,” while the fight gave Mitchell a big chance to get back on top.

“He had just come off a split decision robbery against Sven Ottke,” Calzaghe said when speaking with Sky Sports about Mitchell and the war he had with him. “I knew it was going to be a tough fight because he was a big puncher. The first round I was really sharp, really sharp. I remember being on top of him and I shook him a few times. I felt great against a guy who had never been stopped. I went back to the corner and my dad gave me a big kiss, saying, ‘That was a great round.’

“As you know, the next round he caught me. He was very heavy-handed and it was a punch I didn’t see. I spun around and went down. I had never been hurt or dropped in sparring or in 35 fights as a professional. I was certainly buzzed up. I still remember seeing him across the ring, thinking, ‘oh, dear, this is the first time ever.”

Calzaghe showed heart, along with fine recuperative powers, and he roared back from the knockdown to deck Mitchell in that torrid second round. Then, with Mitchell under fire but seemingly in possession of his faculties, the challenger was stopped by the referee. It was, in the opinion of some (this writer included) a premature stoppage – one that may well have deprived us of an absolute classic. We will never know.

Mitchell, however, always wanted a return with Joe, feeling as though he was indeed stopped far too quickly.

“I went into that fight with a lot of animosity,” Mitchell told this writer when looking back on the Calzaghe fight. “I didn’t really want to take that fight. I didn’t want it at the time. I had personal issues that handicapped me from being at my best. I was kind of forced into that fight. I think the stoppage was definitely premature. I think they [Calzaghe’s team] had seen a tape of my fight with Julio Cesar Green, where I was down twice in the first round, but I came back to stop him in the fourth round. I think they knew how dangerous I was.

“It was a premature stoppage [against Joe]. I always wanted another go at him. His speed was what caught me off guard. He was a lot faster than I thought he would be. He threw amateurish punches, borderline slaps. I give him credit, though. His thing was to try and overwhelm an opponent. He did have enough power to make you respect him but his thing was speed.”

It’s a pity the 2003 fight was stopped so soon, and it’s also a shame the rematch never happened. What do YOU guys think – was Calzaghe TKO2 Mitchell an epic in the making that was ultimately denied us all?