Jermall Charlo, badly slurring, told the media on Saturday night that he’s “bigger” than light heavyweight Dmitry Bivol after meeting him in person during Regis Prograis vs. Jose Zepeda fight in Carson, California.

When Charlo asked Bivol if he’d be willing to fight him next, he said he would. However, it’s possible that Bivol was merely humoring Jermall because he has nothing to offer him in terms of titles at 168.

Interestingly, Jermall Charlo asked Bivol to come down to 160 to fight him, which he immediately rejected. Why he even asked him to melt down that weight is anyone’s guess.

With Jermall’s huge size, he should have no problems meeting Bivol at 175 because it’s not as if there’s a dire need to fight at 168, given that there won’t be a world title on the line.

As for Jermall’s slurring. It’s unclear what that was caused by. If it’s from the punishment he’s taken during his career, it’s not a good sign because it suggests that he’s taken too many hits and won’t be able to continue on as a world champion for much longer.

Indeed, if Charlo is forced to defend against his mandatory Carlos Adames next, which would seem to be the case given his 17 months of inactivity, he’ll surely lose to him.

In Charlo’s last fight against Juan Macias Montiel in June 2021, it was a grueling affair, with him getting nailed frequently by the hard-hitting Mexican fighter.

While Charlo won by a lopsided 12 round unanimous decision, he was hurt in the later rounds, and he looked exhausted at the end. In contrast, the younger fighter Montiel looked fresh.

Hopefully, the slurring from Jermall isn’t from him using alcohol or drugs because he needs to take care of himself, especially if he wants to fight Dmitry Bivol next. Charlo needs to be in tip-top shape to take on a fighter like him because he’s a much better boxer. The way Jermall looked against Montiel, he’d be easy work for Bivol’s last opponent Gilberto ‘Zurdo’ Ramirez. 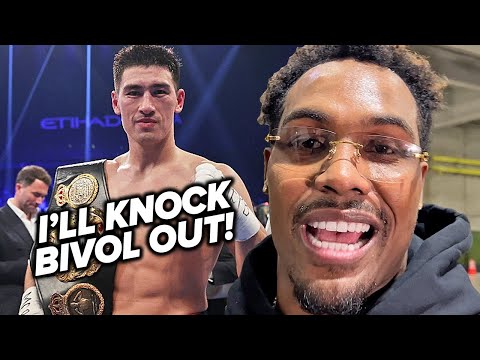 “2023,” said Jermall Charlo to Fighthype when asked when he’ll return to the ring. “I know that’s the biggest question that everybody has. I’m 100% now; I’m ready. You saw Bivol call me out.

“I was impressed by the Canelo fight,” said Jermall about liking what he saw from Bivol in his victory over Canelo Alvarez last May. “I’m impressed with the dude, period.

“Plant, I might go with Plant,” said Charlo when asked to pick a winner between David Benavidez and Caleb ‘Sweethands’ Plant for their fight in early 2023.

“Yeah, hopefully, I get the winner. But you know what? It is what it is. Boxing is going to take its toll. If they want to see me, they’re going to see me.

“I’m knocking everybody the f**k out, alright?” Charlo said when asked how he’ll do against the Plant vs. Benavidez winner.

“[Jaime] Munguia don’t want no smoke. He would have been done fought me. Y’all acting like you’re promoters. I’m not a promoter. I’m a fighter. I do the fighting, alright? If they want to fight me, they’re going to make it happen. That’s all I can do.