Canelo: “Messi Better Pray To God I Don’t Find Him”

Canelo Alvarez is a passionate Mexican, there is no doubt about that. And, in a showing of the passion he has for his country, Canelo has put out a series of tweets in which it has been widely reported that he “threatened” football star Lionel Messi. During the celebrations that came in the dressing room after the Argentina-Mexico game at the ongoing World Cup in Qatar, which was won by Argentina, 2-0. Messi is apparently seen either kicking or wiping the floor with a Mexican flag or jersey (the footage is not great). 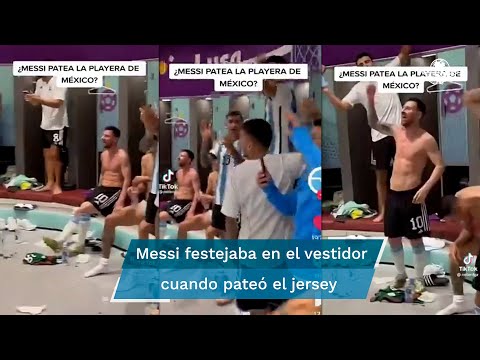 Canelo saw this disgraceful act of disrespect and he took to social media to say the following:

“Did you guys see Messi cleaning the floor with our jersey and flag?” Canelo wrote on twitter. “He better pray to God that I don’t find him. Just like I respect Argentina, he has to respect Mexico! I’m not talking about the country as a whole, just about the bullshit that Messi did.”

Canelo has undoubtedly gone too far here; his passion for his homeland admirable as it may be. Fans have been quick to take to social media themselves, pointing out to Canelo how Messi was simply removing his football boots and nothing more. There was, Messi supporters insist, no disrespect. But Canelo saw red, he felt his country was being slighted and he fired shots that came from the heart.

This will of course all blow over, yet plenty of media outlets have ran with the story. Did Canelo really threaten Messi, and does the multi-weight champion mean to do Messi harm if he does catch up with him? Should Messi apologise for his so-called disrespect?

As for Canelo’s ring career, he is expected to take a “tune-up” type fight in May, before going for that must-win return fight with Dmitry Bivol in September. As to who Canelo’s May dance partner might be, Britain’s John Ryder put himself well in the frame on Saturday night, this by defeating Zach Parker in their WBO title bout. Ryder says it would be a dream to fight Canelo over the Cinco de Mayo celebrations.