It’s not surprising the judges scored it the way they did, but the fans saw what everyone did, and that was Charlo getting repeatedly hurt in the later rounds by the challenger Montiel.

Initially, it looked like Charlo, 31, was going to have an easy night, as he was dominating his hand-picked opponent #4 WBC Montiel, through the first six rounds of the fight.

After wobbling Montiel in the sixth, Charlo was unable to finish him. From that point on, Montiel was like a man possessed, attacking Charlo to the body with powerful shots that hurt him again and again.

Montiel’s body punching took Charlo’s legs and power away completely. It was dramatic how quickly Montiel turned the fight around with his fierce shots to Charlo’s midsection.

Before Montiel started focusing on landing on Charlo’s body, he looked like he was on the verge of being stopped by the Houston native.

Really, things were looking bleak for Montiel in the sixth after being seriously hurt. Charlo unloaded the kitchen sink on Montiel to get him out of there, but he couldn’t do it.

In the seventh, Montiel tagged Charlo with a body shot that sapped his energy like a battery.

It’s a miracle that Charlo stayed on his feet after taking the body shot because he was hurt. From there, Charlo’s legs looked rubbery, and his punches lost all the power.

All in all, Montiel showed how much damage a fighter can do to a superior talent just by staying in there and landing shots. Montiel fought a smart fight by focusing on attacking Charlo’s body.

In the championship rounds, Montiel looked tired, but his punches appeared to be just as powerful as they’d been early. Charlo was all over the place, trying to battle Montiel and getting worked over.

It’s safe to say that Montiel exposed Charlo in a huge way tonight with his body attack. After tonight, we might see Gennadiy Golovkin and Canelo Alvarez willing to fight Charlo.

A rematch between Charlo and Montiel would be interesting, especially if they stage it in a neutral state where the scoring makes sense. Unfortunately, tonight’s scoring from the three judges was out of fantasy land, and they didn’t match the fight that took place.

It’s unclear whether Charlo’s previous fight against Sergiy Derevyanchenko took something out of him or if he couldn’t handle the body shots.

Tonight, Charlo looked nothing like the fighter that had beaten Derevyanchenko with relative ease last September. But then again, Derevyanchenko didn’t possess Montiel’s power, and he wasn’t focusing on throwing body shots like we saw tonight.

That was still a tough fight for Charlo against Derevyanchenko. Charlo got hit in the head a lot in that fight.

Tonight, Charlo’s right eye was all messed up from the big punches that Montiel was nailing him with. You could tell after the fight that Charlo had gone through a grinder.

Like the main event, the Cruz vs. Vargas fight was closer than the judges’ scores. The scoring was embarrassingly bad, with the judges giving it to Cruz by these margin:97-92, 99-90, 100-89.

Vargas was fighting Cruz to a standstill until his eye cut from a terrible head-butt in the 10th round, which led to a controversial knockout.

Between the bogus knockdown and the oddball scoring, it wasn’t enjoyable. Vargas never had a chance in the fight with the way the judges were scoring the rounds.

From what we saw tonight, Cruz will have no chance against Gervonta Davis, Ryan Garcia, Devin Haney, or Vasily Lomachenko. 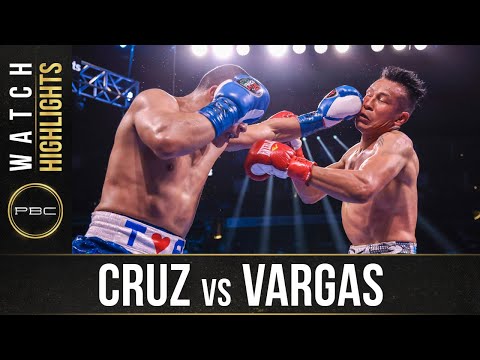