Undefeated welterweight Jaron “Boots” Ennis will look to cement his status as a rising star in the welterweight division when he takes on rugged former world champion Sergey Lipinets in a 12-round battle that headlines action live on SHOWTIME Saturday, April 10 from Mohegan Sun Arena in Uncasville, Conn. in a Premier Boxing Champions event.

The 23-year-old Ennis will be facing the toughest competition of his career in Lipinets as he enters the ring in his first SHOWTIME CHAMPIONSHIP BOXING main event. Representing the fighting city of Philadelphia, Ennis has used sublime boxing skills and power in both hands to make his claim as the city’s next great champion. 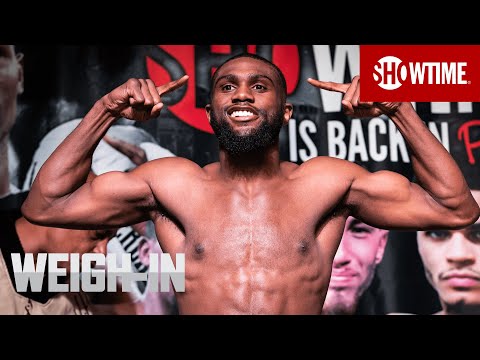 Ennis put together a 16-fight knockout streak that included becoming the first person to stop Juan Carlos Abreu when he blasted out the longtime challenger in the sixth round in August 2020. Ennis was unable to extend that streak in December 2020, when his fight against Chris van Heerden was declared a no-contest after round one due to a clash of heads, causing a severe cut on Van Heerden’s forehead.

Trained by his father, Bozy Ennis, Ennis shared his thoughts on training camp, Lipinets, and more below:

“It has made my schedule a little crazier. Being in the main event on SHOWTIME brings more attention, but I like it. I like being in the spotlight. I like to shine, so it’s nothing new to me. Now it’s fight time. I am locked in and ready to rock and roll.”

“We always do four-minute rounds in camp. I’ve been doing that since I was a baby. That’s another reason why I don’t sit down when I fight because I am so used to the four-minute rounds. The three-minute rounds go by real fast on fight night. One thing we added to this camp was the underwater treadmill work.”

On his final preparations:

“The week before the fight, we are winding it down and sharpening up. It’s been a great training camp. I have been getting better and better each and every day, and I can’t wait to perform next Saturday.”

“He’s a good fighter, but it doesn’t mean anything to me. It’s just another day in the office. He’s a regular person just like anyone else.”

On Sergey calling him a ‘typical Philly fighter’:

“I guess he knows I’m tough, gritty, and I’m ready to rumble. I’m coming there to take a win home to Philadelphia and look good doing it, by any means.”

On his knockout power:

“I don’t think I have my man strength yet. I feel it will be one or two more years until I fully have my man strength. The crazy part is, I feel like in a fight, I still haven’t thrown a real power shot and really sat down on a punch yet. Everything I’ve been knocking guys out with has been all-natural strength.”

On how he views his knockout streak:

“Some people might look at a knockout on April 10 as the 17th consecutive knockout; some might view it as the start of a new knockout streak. For me, I don’t really care as long as I come out victorious. That’s all that matters to me. I’m not looking for a knockout, but I’m going to take it if it comes.”