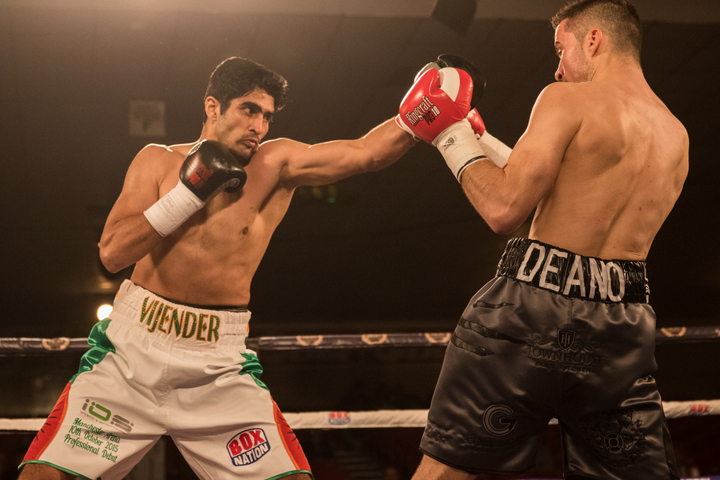 The 30-year-old from Haryana, who’s based in Manchester, was delighted with the performance which was again televised live to his homeland in India on Sony Six and the viewers couldn’t have failed to be impressed by his explosive display.

“Wow! that was quick, man!” Said an excited Singh.

“I felt very comfortable in there and lined him up with my jabs first to get the range, but then when I started connecting with the right I knew it was only a matter of time before I caught him properly,”

“He went down, which the referee said was a slip, I wasn’t so sure about that, but anyway when he got back up I knew I’d hurt him so I went straight into him and didn’t stop punching until he went down,”

“When I landed the last right hand and he dropped I had a feeling that he wasn’t going to get up and when the referee counted to ten it was a fantastic feeling to get my first KO on my record,”

“I said that after the first fight I’d improve and I think that I showed some of the development and improvement tonight, but there’s a lot more to come from me.”

Francis Warren said, “That was very very impressive from Vijender and I’m delighted that he made such a big statement here tonight in Dublin and to the viewers on BoxNation and it also went live to India and that must have gone down a real treat there.”

It was Conlan’s return to the historic venue after his thriller against Junior Granados in July when he was involved in a brutal war with the Mexican and was dropped twice in the seventh round before rallying back to win on the scorecards.

This time Conlan, known as The Mexican, made an easier night of it by dropping Argentine Garzon in the fourth round with a crunching body shot and after getting up, Conlan plied the pressure on with Garzon on the ropes and the referee stopping the fight.

The 28-year-old from Belfast, who holds the WBO Intercontinental title which was not on the line, took his record to a perfect 15-0 with 9 KO’s.

A blockbuster showdown against Ellesmere Port star Butler, the former IBF World Bantamweight Champion, could happen next year and Conlan believes he would be the winner.

“It was good to get Garzon out of there early and without going through what I went through against Granados!” Said Conlan.

“I like to please the crowd as they pay good hard earned money to see me fight and they got the result they wanted when I stopped Garzon,”

“The talk will be of Butler next and I hope it happens, at this weight without a lot of big names we need each other and that would be one hell of a fight,”

“I’m glad he made it over to Dublin to see me fight tonight and the next time I want to see him is when we’re in the ring together,”

“I know I can beat him, he’s fast, but I’m faster, he can punch, but I can puncher harder, I know I’m just that little bit better than him in every department.”

THE WELTERWEIGHT CHAMPIONSHIP OF IRELAND