Former WBO 154-lb champion Jaime Munguia is highly confident that he’ll come out victorious in his scheduled main event fight against Jimmy Kelly this Saturday night on June 11th live on DAZN at the Honda Center, in Anaheim, California.

With Munguia’s #1 ranking with the WBC & WBO, it’s difficult to understand why he’s still choosing to fight fringe contenders like the 29-year-old Kelly (26-2, 10 KOs).

Munguia (39-0, 31 KOs) could be challenging for a world title or at the minimum, be fighting well-known contenders like Chris Eubank Jr, Carlos Adames, or Janibek Alimkhanuly.

The 25-year-old Munguia is being moved at a glacially slow rate by his promoters at Golden Boy Promotions, and it seems obvious that they’re waiting for the perfect opponent before they’ll let Jaime off the leash.

It’s well known that Golden Boy would like for Munguia to face IBF/WBA middleweight champion Gennadiy Golovkin, but it’s unclear whether they’ll get their wish.

Golovkin has been waiting for a trilogy match with Canelo for the last three years, seemingly holding back from fighting quality opposition.

Now that Golovkin finally has the trilogy set up with Canelo for September, it’s unknown if he’ll continue his career after that fight. If so, Munguia might get his chance to fight the popular Kazakh star.

“I think he’s good, but obviously a lot of people don’t think he is,” said Jaime Munguia to Fight Hub TV when asked about his thoughts on his opponent Jimmy Kelly.

“I’ve seen him, and I think he’s a little difficult,” Munguia said. “I know he’s very motivated to win and take away my 0. But we are very prepared, and we will do well.

“Obviously, a lot of people don’t know him, but I’m telling you, he’s motivated to come out on top and win and take my 0. I’m very prepared and we will win.

“I think that’s possible. Obviously, I’m looking for the KO, but if it goes 12 rounds, I’m ready. [Trainer] Erik [Morales] feels this is a difficult fighter, and he moves a lot in the first half of the fight.

“I got to keep center ring, fight at my distance and keep calm. Well, we hope this next fight we get a big challenge and a big fight,” Munguia said when asked when he plans on fighting a big-name opponent.

“I think [Jermall] Charlo, I would like that fight. That’s good. He’s a good fighter and has a big name,” Munguia said when asked about whether he’d be interested in fighting Chris Eubank Jr. “I’m ready to fight with whoever.

“Well, making weight is a bit more difficult now, but at the same time, I don’t have a problem making it,” said Munguia. 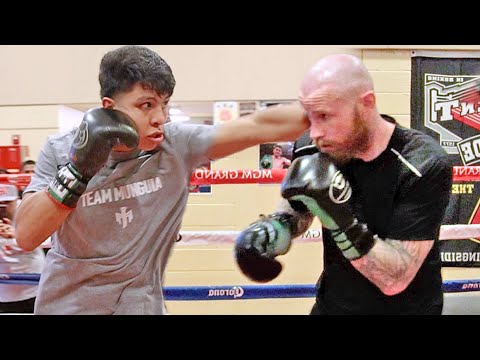