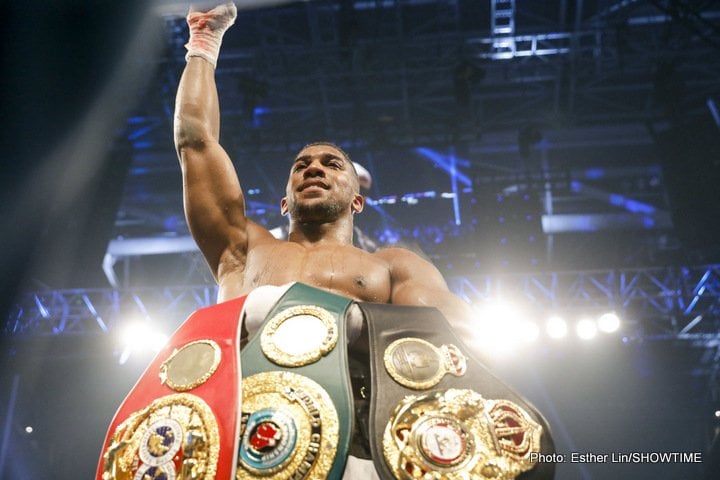 Promoter Eddie Hearn is pushing to have heavyweight champions Anthony Joshua and Deontay “Bronze Bomber” Wilder fight on the same card in March or April before matching them up against each other in the summer.

Hearn wants to build up the Joshua vs. Wilder unification fight anyway he can before putting them in with each other next year. Since the unbeaten Wilder (39-0, 38 KOs) wasn’t receptive to Hearn’s idea of fighting Dillian Whyte on February 3, he wants to put Bronze Bomber on the same card with Joshua in March.

Whether that will do much to increase the interest in the Joshua-Wilder fight in the boxing world is open for debate. It’s probably a wasted effort on Hearn’s part. The boxing fans will want to see Wilder and Joshua fight each other regardless. They don’t need to fight on the same card in March for the fans want to see them square off.

“We had a good breakfast meeting with Shelly [Finkel] and Al [Haymon]. Everyone’s on the same page,” said Hearn to secondsout. “It’s the biggest fight in world boxing. We’re going to work on venues and dates. We spoke about both fighting on the same card in March, and then fighting in June or July. It’s going to be difficult on the financials and the split. We’re all trying to see if we can get it over the line. If I was Deontay’s promoter, he wouldn’t be able to walk down the street without people knowing who you are. You are the world heavyweight champion. I think we need to build both of them here, but maybe we won’t have time.”

The only way to build up the Joshua vs. Wilder fight for it to be huge would be to wait 2 to 3 years before eventually matching them. That’s not realistic. Wilder and Joshua could lose to one of the contenders before then, and that would ruin their mega-fight. It only takes one big shot for a champion to be unseated by a hungry contender.

With Joshua holding down the IBF and WBA heavyweight titles, he’ll be expected to fight good contenders, and he could lose to one of them before he faces Wilder. Joshua could even lose to Tyson Fury next year. Joshua isn’t one of those types of talents that give you a sense of confidence that he’s going to be able to hold onto his titles for years without losing. He’s not that type of talent.