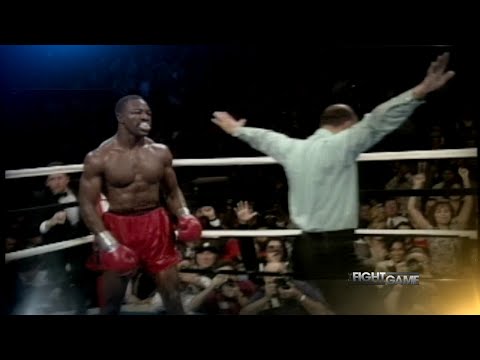 Though fight fans the world over were treated to a truly thrilling rivalry comprising of three magnificent fights, each of them crammed full of heart-stopping drama (no pun intended regarding the third and final fight – more about this later) – in truth nobody was really expecting a classic to unfold on November 13, 1992.

Bowe may have been a former Olympian, a silver medal winner who had been stopped by Lennox Lewis, he may have been trained by the cerebral Eddie Futch and he may have had a nice, shiny 31-0 pro record, but the knock on Bowe from those who knew him was that he was a quitter; a man-child who could be relied upon to capitulate when the going got tough.

Holyfield, though a “small” heavyweight at less than 210 pounds, was a proven warrior and most felt he would bring too much heat and heart for Bowe to be able deal with. Such thinking was instead proven wrong and Bowe, in his career-finest showing, when weighing a finely tuned 235 pounds, brought back the heavyweight greatness of yesteryear – with no small amount of help from the never-say-die Holyfield.

The two engaged in fierce warfare for all 12 rounds a quarter of a century ago today, with the savage trading of leather, the testing of mettle leaving even seasoned, grizzled fight people in awe. The fight was fought at a sprint-like pace, with both superbly conditioned big men (well, one big man, one not so big) slinging well over the average when it came to number of punches thrown by heavyweights per round. Clinching was out of town for the most part and the two had to dig deep a number of times at least.

The tenth-round became legendary. 25 year old Bowe, cracking Holyfield with an inside uppercut that blasted the champ’s chin upwards (on this night Bowe, a huge man, showed he could fight on the inside with the best of them; this quality no doubt the product of the teachings of the celebrated Futch), let loose with a vicious torrent of follow-up blows; the challenger putting it all in in an attempt to get what everyone ringside was sure was his: the KO stoppage.

But Holyfield, showing incredible, almost logic-defying resilience, held on. And then he came firing back at Bowe! The fact that this three-minutes was awarded The Round of The Year distinction does not come close to telling the full story.

The heroic last stand left 30 year old Holyfield – who was 28-0 and making the fourth defence of his titles – a badly depleted fighter and he was finally decked in the next round. Bowe then all-but coasted to the finish line in round-12. The verdict was a formality despite the greatness of the fight – Bowe winning via unanimous decision.

Holyfield would be back though!

Being trained by Emanuel Steward for the return a year later – Emanuel at the time being the sole boxing trainer capable of going head-to-head with the brains and smarts of Futch – Holyfield capitalised on both a stellar game-plan and the fact that new king Bowe had seriously enjoyed himself since winning the crown, ballooning in weight and defending his belts against so-so at best opposition.

Still, another excellent, if not quite as epic a fight broke out. Made even more memorable due to the idiotic decision a paraglider came upon to literally drop into the ring mid-fight, Holyfield-Bowe II saw the former champ shut up plenty of critics and regain his crown.

The rubber-match simply had to happen.

But things had changed somewhat by the time fight-three rolled around in November of 1995. Neither guy was champion at the time of the decider, Holyfield having been beaten by Michael Moorer, during this fight suffering a reported heart attack. While Bowe had failed to cut down his out of the ring excesses, looking poor in three of the four fights he’d boxed since the close decision loss to Holyfield (Bowe’s crushing KO of loudmouth Cuban hype-job Jorge Luis Gonzalez being reasonably, certainly ruthlessly, impressive).

Holyfield’s career looked to be over after the loss to Moorer (who made boxing history at Holyfield’s expense – becoming the very first southpaw world heavyweight champ with the dull decision win he scored in April of 1994). But in came a so-called faith healer and Evander was back; actually beating the seriously tough Ray Mercer in good fashion in his first fight back after either being “healed,” or misdiagnosed in the first place.

The third and final shoot-out between Bowe and Holyfield saw yet more drama; some of it proving too much for some. Holyfield looked woefully fatigued in the early rounds, prompting some observers to fear the worst. Was Holyfield’s heart actually failing him, again? Heavyweight legend turned commentator George Foreman basically “freaked out on air,” as one publication put it; Foreman screaming for the fight to be stopped.

But then, in the sixth-round, Holyfield sensationally slammed Bowe to the canvas with a startling left hook that landed bang on the chin. Bowe got up but he was glued to the mat, unable to move away from Holyfield’s furious follow-up attack. But Holyfield, his energy leaving him, sagged, Evander too exhausted to finish the job. Bowe escaped one massive scare and then put an advancing, going for broke Holyfield down even harder in the eighth. Holyfield dragged himself upright at “9” but he was all done, Bowe finishing him off seconds later.

And with that, the finest heavyweight trilogy aside from Ali-Frazier (and plenty debate this) was over.

Will we ever see as savage, as majestic a heavyweight rivalry again? Will we ever again see the kind of toe-to-toe action Bowe and Holyfield gave us in fight-one all those years ago? Joshua and Wilder, it’s over to you.