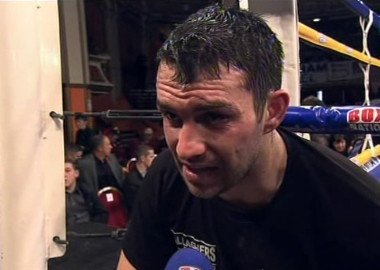 After 10 years as a pro, Britain’s Paul Smith (35-3, 20 KOs) will finally be getting a world title shot against WBO super middleweight champion Arthur Abraham (40-4, 28 KOs) on September 27th in Germany.

Whether Smith actually deserves the title shot is debatable, as he’s won four fights against soft opposition since his 2nd round knockout loss to George Groves in 2011. On paper, the 31-year-old Smith doesn’t have much of a chance of winning, because he’s lost each time he’s tried to take a step up during his career in defeats against Groves and James DeGale.

Smith’s promoter Eddie Hearn thinks that he could be getting the 34-year-old Abraham at the right time in his career, because Hearn sees Abraham as someone that is up there in age and ripe for Smith to pick him off to win the title. Hearn has doubts whether Abraham is interested in putting in the hard work that he’ll need to in order to beat Smith.

“I think this is the perfect time for Paul Smith against Abraham,” Hearn said to Skysports.com. “Abraham is on the backend of his career. Does Abraham still have the desire against an opponent like Paul Smith? Can he get himself up for those runs and the long spars? Paul Smith can. This is a once in a lifetime opportunity and he’ll put everything into it on the night of the 27th.”

To be honest, it might not matter even if Abraham doesn’t have a killer training camp, and if he doesn’t come into the fight at 100%. Even if Abraham is at 60%, he’s probably going to be far too strong for the hittable Smith. Abraham has major power going for him, and he’s going to have little problem landing his big power shots in the fight. The question is will Smith be able to take Abraham’s power shots for 12 rounds? I have my doubts whether he will.

Abraham can be out-boxed, as we saw in his losses to Carl Froch, Andre Ward and Andre Dirrell. But Smith doesn’t have the boxing skills that those fighters do. He’s got the reach, but he’s too slow-footed and heavy-legged for him to be able to stay on the outside and pound out a decision the way those fighters did.