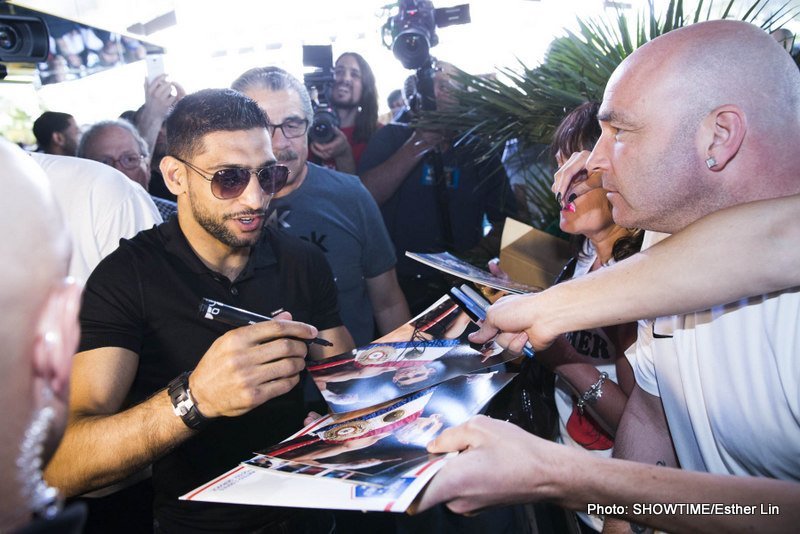 It’s looking increasingly likely that Britain’s Amir Khan (30-3, 19ko), who fights American Chris Algieri (20-1, 8ko) in New York on May 29th, will have to give up on his dream of fighting Floyd Mayweather, a fight he has been chasing for the better part of 2 and a half years.

Mayweather has stated equivocally that win or lose on May 2nd, his last fight will be in September.

“My last fight will be in September. I don’t know who I will fight in September, but I shan’t be overlooking anyone”

This is obviously a blow to devout Muslim Khan, who after the Algieri fight will observe a period of fasting during the Islamic festival of Ramadan. This ends mid-July in 2015 and Khan is well known for needing plenty of time to train and recover following it, ostensibly leaving him too little time for his dream bout with Mayweather in September.

Over recent months, Amir has looked nothing short of desperate in chasing a Mayweather “money-fight”, resisting the challenge of fellow Brit Kell Brook, who as IBF champ and the only other recognised belt holder at 147, is by a far and away a better fight for Floyd to end his career on?

Brook would have been the better fight for Khan now also, as the May 30th date he was offered for it is before Ramadan. By opting to fight the light punching Algieri on the 29th, you can’t help but think he still has his eyes on fighting Floyd or even Pacquiao next and is simply unwilling to take too much of a risk.

Victories over Pacquiao in May and a win over Brook in September, thus fully unifying the division and taking the IBF belt, would be a fitting end for “Money” to cement his legacy as the self-professed “best ever”.

Whilst many are predicting Mayweather and Brook wins ( vs Gavin – May 30) this month, it is obviously not a given and one gets the feeling that should Floyd lose to Pacquiao, then a rematch will in fact happen in September instead.

What Mayweather wants, Mayweather gets it seems. And this writer can see no reason for him to go out fighting a belt-less Khan for his very last fight. As I said in the title, give up on Floyd, Amir……It ain’t ever going to happen….