Kambosos Jr (20-1, 10 KOs) is expected to be a lot more aggressive for the rematch with Devin (28-0, 15 KOs) compared to the first fight between them in June of this year.

With Kambosos Jr expected to retire if he loses, he has no choice but to fight aggressively. Kambosos Jr will be fighting in front of his home fans once again, so it’s not a fight that he can afford to lose in front of them a second time.

“Still a hunter’s mentality, and you guys will see on October 16th,” said Devin Haney to Sports News Australia about his rematch with George Kambosos Jr in Melbourne, Australia.

“No, not yet. You guys will see more Devin Haney. Not the best Devin Haney on October 16th, but more.

“I don’t think he should retire. He’s still a great competitor and a big name in this sport. Just because he loses to me doesn’t mean he should retire,” said Haney about his thoughts on Kambosos Jr expected to retire if he loses on October 16th.

“We’ll see on October 16th. We’ll see,” said Haney when asked if his job will be harder against a more aggressive Kambosos Jr.

“George had a lot of things that he had to work on. I hope he worked on then,” said Bill Haney. “We’re looking forward to the best George on October the 16th.

“You never got into expecting anything one-sided. We know that George is a desperate man. He’s an unpredictable man. He’s a man that has everything to win and nothing to lose. So, we’re prepared for the unpreparable if that can make sense.

“It’ll be one more step towards the greatness that he wants to have in boxing,” said Bill when asked what it’ll mean to Haney to successfully defend his undisputed lightweight crown against Kambosos Jr.

“To be on the Mount Rushmore of boxing of the all time greats. To come and defend the belts as an undisputed champion will be quite a  remarkable feat.

“The Australian people have been tremendous to us. Shout out to the Victorian government, who got me out early this time. They gave us 18, 19 day, so we’re pleased,” said Bill Haney. 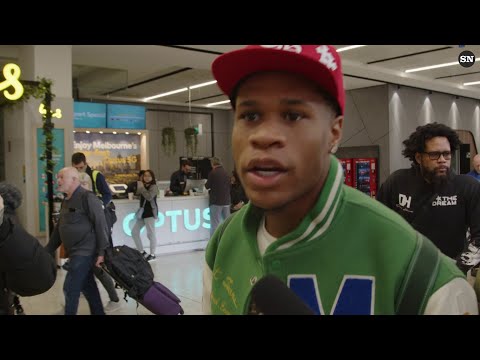