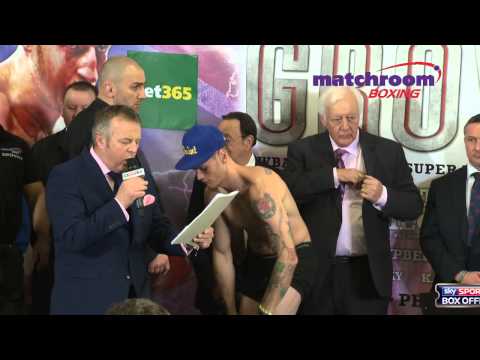 Carl Froch and George Groves had to be separated at today’s weigh-in for their World title clash at the Phones4u Arena in Manchester tomorrow night, live on Sky Sports Box Office, in association with bet365.

Froch tipped the scales the heavier man at 11st 13lbs 12oz with Groves over a pound lighter at 11st 12lbs 6oz, and as they squared up they had to be pulled apart after the champ twice whispered into the challenger’s ear.

Not even those on the stage would be able to hear what ‘The Cobra’ said to ‘Saint’ George over the raucous atmosphere created by the packed crowd at Manchester Central, but Froch was quick to tell Sky Sports News that he was leaving Groves in no doubt as to the magnitude of the occasion.

“I was just letting him know he is in deep water,” said Froch. “The time is now. David Haye will say the same, it’s just sort of bringing reality.

“In all honesty, I didn’t say a great deal that was significant because he was just silent and he looked petrified. Yesterday he looked worried; today he looks really, really worried.

“He looks like a really worried man that realises the magnitude of the event and it will be dawning on him. I don’t think he’s sleeping and he shouldn’t be because he’s in serious trouble.”

Groves was unmoved by Froch’s words though, and the unbeaten Londoner brushed it off as part of the fun and reminded Sky Sports News that he’s already told Froch how the start of the fight will pan out.

“He didn’t say anything that he hasn’t said before,” said Groves. “I just looked at him. I’ve said enough that needs to be said now. He can choose to listen or not.

“I gave him the game-plan, how much of a gentleman do I need to be? He’s got two days to adapt; now he’s got one day left. We’ll see what he comes up with.

“I’m more than confident that I’ve got the tools to beat Carl Froch. I can’t wait to get in there and show him.”

WBA Super Bantamweight champion Scott Quigg defends his title against Argentina’s Diego Silva in the chief support bout, and the Bury man is promising a big performance after his majority draw with Yoandris Salinas in London last month.

“Diego is not as awkward and slippery Salinas, he’s game and he comes to fight, he’s dangerous with he’s hooks and he’s mixed at a good level,” said Quigg, who scaled 8st 9lbs 10oz, four ounces more than Silva. “He brings different dangers to the ring but I’m fully focused as these are the fights that you have to win and look impressive in the process.

“He’s come back from the Montiel defeat with some good wins and there’s certainly no disgrace in losing to a three-weight World champion like him.” 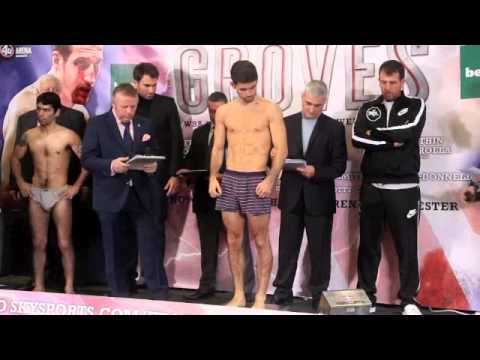