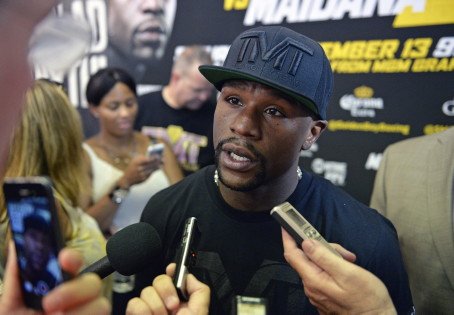 Mayweather worked out for close to two hours. He shadow-boxed, hit the mitts, did calisthenics, worked the speed bag, jumped rope, smacked the heavy bag, did stretching exercises, sit-ups, stand-ups, posed for photos, signed autographs and conducted copious amounts of interviews, some in groups and others one-on-one, as soul and rhythm and blues music blared in the background.

“This is a remarkable turnout and I appreciate the media who came out today. I’ve had a tremendous training camp and worked very hard. I’m mentally and physically prepared. I’m doing this fight for the fans. The fans have been with me for 18 years. It’s because of them I’m here today. I have to embrace the fans.

“This fight is about the sport of boxing. Fans wanted to see this fight. They like to see excitement. Why not do it again? Maidana is a hard worker who is coming to fight. My job is to be patient and smart and to entertain.

“The first few rounds were exciting last time and then I turned it around in the second half. I expect to throw more combinations this time. I can’t say if the rematch will be easier. I won the first fight, it’s up to him to change. The champ can make adjustments and I can be especially smart about it. Nobody can solve the May-Vinci code.

“Watching a fight from the outside is totally different than from what’s going on in the inside. He may have been attacking but I was countering, throwing body shots. That affected his thought process and he fought different after that.

“I always find a way. Whether I am 26 or 37, I still find the way to win. I guess when you win all 12 rounds, or 10-plus rounds so many times, fans and the media get spoiled. The bar is set so high. I fight not only my opponent, but everybody, the biased fans, the biased critics.

“But I was the one who set the bar so I can understand. But it’s not about silencing critics at this point. My thing is I have to take care of my children and family. My job is to do what I what I do best. My job is to be Floyd Mayweather.

“I’m one of those who trains every day. I look and feel strong. I’ve dedicated myself to training. The other day I went 14 non-stop rounds. As I get older I grow mentally if not also physically.

“I’m going strong and my team is going strong. SHOWTIME and CBS are the best. They gave me an offer I couldn’t refuse.

“I don’t really focus on who I might fight next, or how many times I’ll fight. But my job is to take it one fight at a time. We’ll see how it plays out on Sept. 13 and go from there.

“One day I want to go into the Hall of Fame, not as one of the all-time best, but the best.”

“The world title fight for me is huge and it just shows that being patient and doing the hard work pays off. I’ve had a lot of interruptions but you just have to stay patient, stick with it without losing focus, training hard and never think about quitting or giving up.

“It’s gonna be a big night on Sept. 13. It’s been about a year’s wait for me, but look at that as a positive because it gave me more time to perfect my craft. I had so many breaks with no fights, but I just had to stay dedicated, keep looking at it as a positive thing, and keep learning.

“Vazquez is a legit champion with several title defenses. I give full credit to him. He’s rated No. 1 at lightweight. That’s what makes it better for me. A lot of people complain that guys are fighting for vacant titles or cherry-picking. I just love the biggest challenges and coming out on top and that is what I’m gonna do on Sept. 13. We’re both stepping up and I’m the underdog.

“I prefer this. I don’t need the easy route. I’m finally where I’d be if I hadn’t had all the inactivity. So I’m gonna kill all the birds with one stone. People don’t know how hungry or determined I am. You never know who’s gonna come out on top in this game, you never know for sure what the guy has inside, and you never know what a fighter’s gonna bring that night. So you’ve got to be ready.

“There’s no added pressure on me. Every promoter has fighters that lose. I’m just glad that I finally get to step up for a title against a legitimate champion and can become a world champion. That is definitely big for me

“Camp was excellent. I learned from the [John] Molina fight. I’d won every round but the only thing I shouldn’t have done was showboated at the very end. Nobody beat Molina like I beat him, not even (Lucas) Matthysse. Matthysse had problems with him.

“So I learned the hard way that you don’t play around until after the bell rings and the fight is over.”

“Maidana is going to get his butt whooped again, just in a more fashionable way this time around.

“Floyd beat Maidana in the first fight and there’s really nothing else to say.

“I am going to have Floyd do a lot of things differently in this fight than he did during the first fight.

“I am going to tell you something, something was on Floyd’s mind that day and the lord is my witness. He finally came around and told us all what it was about. Floyd is going to give Maidana a boxing clinic this time around.”

“Nothing has changed now that we are taking the lead and promoting Floyd’s fight. And Floyd plays a big part in that as well. He is there every step of the way and makes decisions on all of the major creative and marketing areas that goes into selling one of his fights. But that has been the case for many, many fights now. Floyd is always hands on. He’s been making the decisions then and now.

“Personally there is no difference now that Mayweather Promotions is the main promoter. The whole licensing thing is simply a formality. We’ve been putting in the work for years but just haven’t been getting the credit.

“It’s hard work combined with marketing that will allow you to make the crossover to the masses. You have to go beyond the diehard boxing fans to reach a bigger audience and make a PPV fight a success.

“This fight is a must-see fight. The first fight was a tremendous fight. Maidana and a lot of his fans thought that he won the fight. The judges saw a very close fight, with Floyd getting the nod. We know coming into this fight that anything can happen. It’s important for the fans to tune in because you never know what will happen on September 13.

“Being able to witness the greatest fighter to ever do it, it can’t be explained what a wonderful opportunity it is. It’s all history in the making.

“Floyd has super human powers. He is an incredible athlete. What other athlete in sports has been undefeated in anything over the last 16-17 years? Who else has dominated their sport over that long of a period of time? Floyd Mayweather has been undefeated since 1996.

“You can’t look past September 13. Mayhem – Mayweather vs. Maidana 2. We just had a fighter get knocked out, who was the heavy favorite going into a fight. We are not looking past Marcos Maidana. We know he has tremendous punching power, when he hits guys they fall. He’s been in the ring with Floyd and he has a tremendous amount of confidence coming into this fight.

“Maidana has done a lot of trash talking because of that supreme confidence that he has. He is going to come in tremendous shape and Floyd will have his hands full. It’s going to be great, this fight will be better than the first fight.”