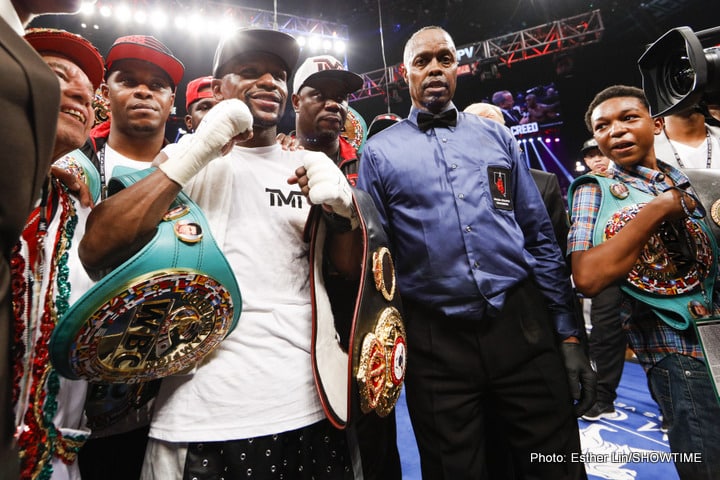 After he ‘retired’ from the sport [not for the first time] after last Saturday’s win over Andre Berto, it would be a reasonable assumption to expect that Floyd Mayweather’s WBC and WBA 147 and 154 lb titles would instantly become vacant – but alas, that has proven not to be the case – just yet, at least.

Mayweather stated after the Pacquiao fight in May that he would vacate his belts in order to let up-and-comers like Errol Spence Jr – a Mayweather Promotions fighter – ultimately duke it out for them, although he then went back on that, even refusing to vacate his WBO welterweight strap until he was stripped, forcing Tim Bradley and Jessie Vargas to battle for an interim strap in June. Bradley was later upgraded.

Both the WBC and WBA have continually contravened their own rules regarding “Money,” who hasn’t defended his WBC 154 lb strap in two years, and by holding titles in multiple weight classes he is in breach of both organisation’s policy in any event. Such is the financial incentive to keep Floyd on as champ with the various sanctioning fees that neither the WBC or the WBA seem in a rush to do anything much about it.

Speaking to ESPN.com, the WBA have insisted they will attend to the Mayweather matter in due course and vacate his belts, although they have given no time frame whatsoever with regards to when.

The WBC on the other hand, have decided to wait until November when they have their annual convention – this year in China -to sort things out.

“The future of the welterweight and [junior middleweight] divisions will be among the priority discussions during the convention,” and although they did not elaborate further, it was stated that ALL titles and mandatory situations across ALL divisions will be addressed at the event.

For many years now Mayweather has danced merrily to his own tune. It seems the WBC and WBA are happy to dance with him, though one has to question the sense in allowing a fighter who has announced his retirement to keep hold of the belts?