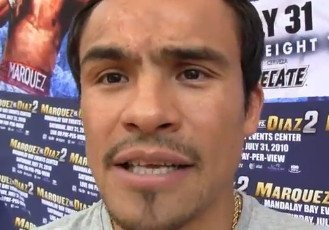 4 division titlist and future Hall of Fame Inductee, Juan Manuel Marquez – last seen beating Mike Alvarado in May 2014, has said he is still undecided over any potential ring return, although the knee injury that has seen him sidelined of late is ‘feeling good,’ and he has resumed light training.

“I feel great, I’ve started training. I feel happy because my right knee is good and I feel good,” he said in an interview conducted with fighthubtv.

The Mexican, who harbours a desire to become the first of his countrymen to win 5 titles in 5 different weight divisions, is insistent that he feels good mentally, although must be acutely aware that at 42 years old, time is no longer on the side of him achieving the history making feat he so desires.

Marquez is fondly remembered by Mexican fans especially for his 2012 one punch knockout of Manny Pacquiao in what was their 4th encounter. Many saw it as him being justly “rewarded” for his heroic efforts in the prior three fights that saw him draw one and lose two to the Filipino superstar.

Top Rank, who promote the Mexico City native have insisted that if any return is to take place, then it will only be for the big-money fights, and over the course of this year his name has been mentioned in the same breath as the likes of IBF welterweight champion Kell Brook, whose promoter Eddie Hearn had been making the noise about a potential clash, expressing a desire to get Marquez to England.

“My doctor has told me my knee is good and I’m training very good [sic],” he added. “We will see what is my future,” he said, although one suspects that we may well have seen the last of Marquez, who is no longer ranked with any of the major sanctioning bodies given the length of time he has been inactive.