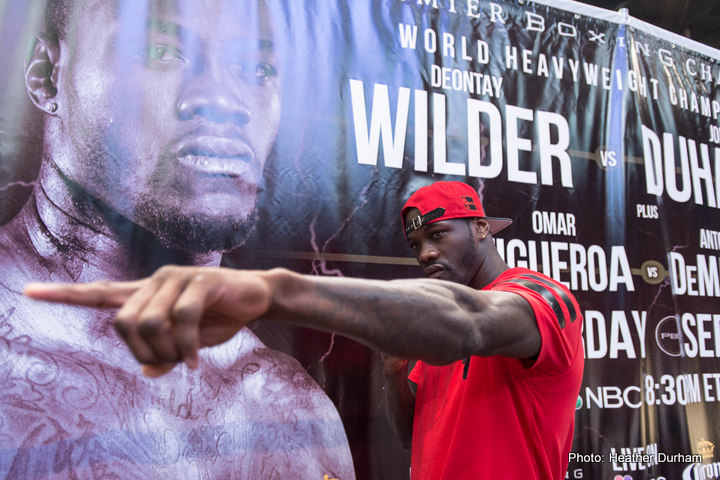 Ahead of his maligned title defence against little known Frenchman, Johann Duhaupas, later this month, WBC heavyweight champion Deontay Wilder has spoken out to insist that the prestigious green belt he won back in January against Bermane Stiverne is staying in America for a long, long time.

That statement is sure to prompt loud snorts of derision from boxing fans the world over, dismayed at the Alabama native’s seeming reluctance to face any “top level” opposition as he counts down to January’s mandatory defence against dangerous Russian, Alexander Povetkin.

After struggling against part-timer, Eric Molina, back in June – getting rocked badly en route to securing a 9th round stoppage – Deontay has come under more fire for choosing the unheralded Duhaupas for his next defence – a defence that will also take place on the PBC brand, again in his Alabama backyard.

“For the first time in a long time an American is the heavyweight champ and the title is staying right here,” the Al Haymon advised Wilder said, ostensibly stating the obvious if he keeps feasting on unproven, 2nd tier opposition like he has been.

“For the longest time our [heavyweight] division was THE division in boxing and now you’re seeing a resurgence of that,” he continued. “Fighting on network television gives us the opportunity to showcase ourselves to such a wider audience. People in our country have been waiting for a star in the division for a very long time and I can promise you – I am that man.”

“That man he ain’t,” is the feeling of many right thinking fans with regards to the big-hitting Beijing Bronze medal winner.

The last American to hold a portion of the heavyweight crown was professional irritant, Shannon Briggs, who briefly held WBO honours for 7 months between ’06-’07, although Wilder, who has held the crown 8 months, will quite possibly lose it when he fights mandatory challenger, Povetkin next year anyhow.

Talks are set to open with the Povetkin camp in October, before the fight then goes to purse-bids if terms cannot be agreed for a January date. In that event even the notoriously deep pockets of Haymon and his myriad of investors will likely prove insufficient stood up next to the wealth of Povetkin’s Russian financiers.

It means Wilder could well travel to the Russian’s homeland for the fight – as long time champ Wladimir Klitschko was also forced to do when he beat Povetkin almost 2 years ago. As a side note, team Wilder can forget about paying the Chekov native to step-aside to let a lower ranked fighter in first either – he’s made it clear already, numerous times, he wants that shot when it’s due.

One has a feeling that as far as Deontay and his green belt are concerned – it’s only going to be a matter of time until he’s relieved of it.