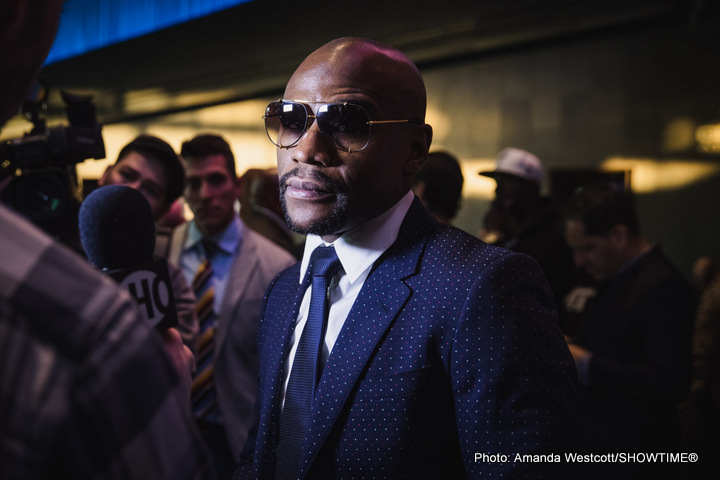 Floyd Mayweather, who is currently in the UK on a tour to meet the fans, has officially ended the retirement he had been in since his September 2015 win over Andre Berto – so that’s 18 months if you’re keeping count.

Talking to the fans and media in attendance at Liverpool’s Auditorium last night, the 40 year-old star said he is “tired” of the excuses MMA star Conor McGregor is making with regards to making a fight with him, and Floyd said he has “officially” ended his retirement as he aims for McGregor.

“When I faced Arturo Gatti, I went to his turf and he was the A-side I was the B-side,” Mayweather said. “I beat him and I didn’t cry or complain. Oscar De La Hoya he was the A-side, I was the B-side. I didn’t cry, I didn’t complain. I beat him and I became the A-side. Now Conor McGregor, I’m officially coming out of retirement just to fight Conor McGregor. I don’t wanna hear any more excuses about the money. Sign the paperwork with the UFC so you can fight me in June, simple and plain. Let’s fight in June. You’re the B-side, I’m the A-side.”

If Mayweather had officially ended his retirement to fight a reigning welterweight champion, fans would almost certainly be a whole lot more excited than they will be at the news regarding this, the latest instalment in the Floyd-McGregor saga. But it’s clear Mayweather really, really wants to fight McGregor. And we all know why: in a boxing match, for a mega fee of $100 million, Mayweather would literally clean up big time.

But will McGregor agree to a fight in June, will he be allowed to do so? If not, Mayweather’s break from retirement will not last very long at all.

But do fight fans really crave a Mayweather Vs. McGregor showdown as much as the self proclaimed A-side does? Would anyone really be willing to give McGregor even a small chance of being able to hit Floyd, even once?