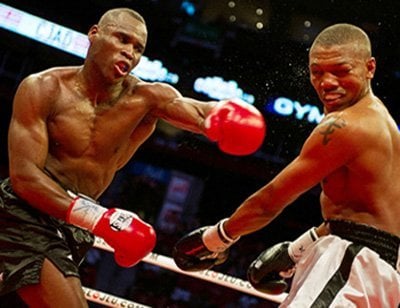 “I stopped Bute with 20 ounce gloves in sparring. I stopped him in like the third round, so when Bute fought Carl Froch I knew he was going to get hit because Carl Froch has a good style.”—Adonis Stevenson

Exclusive Interview by Geoffrey Ciani – I was recently afforded the opportunity to speak with #1 ranked IBF super middleweight mandatory challenger Adonis Stevenson (19-1, 16 KOs). Stevenson is looking forward to the chance to fight for the title after the dust settles in the upcoming rematch between reigning IBF champion Carl ‘The Cobra’ Froch and current WBA title holder Mikkel Kessler. Stevenson shared his views on that match-up, and also discussed his plans while he waits for his opportunity. Additionally Stevenson also talked about his twelfth round stoppage victory against Donovan George, his opinion on 168 pound king Andre Ward, and the sad and untimely passing of his Hall of Fame trainer, Emanuel Steward. Here is what Stevenson had to say.

GEOFFREY CIANI: Hello boxing fans. This is Geoff Ciani from East Side Boxing and I am joined by super middleweight contender, Adonis Stevenson. How’s everything going today, Adonis?

CIANI: Good to hear. Now a few weeks ago it looked as if you were in the running for a title shot against IBF champion Carl Froch, but instead it looks like Froch is going to have that rematch with Mikkel Kessler. Did this news surprise you and how disappointed were you by this?

CIANI: Now what do you think of this rematch? The first fight was a pretty close fight that Kessler won during the Super Six tournament. What are your views regarding this rematch?

CIANI: Now you mentioned the winner of that fight will have 90 days to face you. Do you have a preference on which guy you would rather face?

Read:  Quite The Undercard Shaping Up For Pacquiao vs Spence

STEVENSON: Yeah! Yeah, my preference is Carl Froch. That’s my preference because he fought two boxers from Canada in Quebec City. He fought Jean Pascal and he got the win, and he fought Lucian Bute and he got to win the title. So I think with him that’s the dream, because Carl Froch is going to come to Montreal. Whenever we go to the purse bid, I know the match is coming to Montreal and it’s going to be big in Montreal with me and Carl Froch. That’s a big, big fight because he beat Bute and he beat Pascal. I think me and him, that’s a big fight in Montreal.

CIANI: Were you surprised that Carl Froch beat Lucian Bute?

STEVENSON: I was not surprised because I sparred with Lucian Bute. I know Bute very well. I sparred with Bute. I stopped Bute with 20 ounce gloves in sparring. I stopped him in like the third round, so when Bute fought Carl Froch I knew he was going to get hit because Carl Froch has a good style. You know Bute, he can box but you know Carl Froch is more aggressive. He’s more aggressive and that I think confused Lucian Bute because Carl Froch just kept coming to him, and he was getting to him, and he was very upset and surprised about Carl Froch.

CIANI: Now in your last fight you scored a twelfth round knockout against Donovan George to become the IBF mandatory challenger. Looking back on that fight from last October, how do you evaluate your performance?

CIANI: Now in the lead-up to your fight with George your Hall of Fame trainer, Emanuel Steward, had fallen ill, and sadly he passed away a couple of weeks after your fight.

CIANI: How difficult was it preparing for that fight and the aftermath of that fight with the sad news surrounding the great Emanuel Steward?

STEVENSON: Yeah. You know it was sad news for me, because Emanuel is a good trainer. He trained me and I learned a lot from him with my boxing, and my skilled boxing. I learned a lot from him and I was really sad, because I didn’t want to believe that he was gone and passed away. You know I had just signed with him, and he trained me just a couple of months before, and now I heard that he passed away. You know. So I was very sad. I was really sad about that.

CIANI: As somebody who had the opportunity to work with Emanuel, how do you think he will be remembered by fans for his impact on boxing?

STEVENSON: That, you know, we lost. In Emanuel we lost in boxing one of the great, great, great trainers who was famous in boxing. You know this guy as a trainer has got a lot of talent, and he changed the boxers. He made 47 world champions. This guy, he’s a genius! He can teach you very, very well. He could teach you and I don’t think we have a lot of trainers who can do that. He’s got a lot of talent. We lost one of the great trainers in boxing with Emanuel, because this guy is a genius and he has a lot of talent. He can teach you very well, and I think you see it in Wladimir Klitschko. You have a lot of boxers you can see that in. He’s a world champion, and you learn about him. So he makes you very, very confident. That’s very, very, very important.

CIANI: Changing things up here, it’s been almost three years since you suffered your only career loss at the hands of Darnell Boone. How do you feel you’ve improved as a boxer since that time?

STEVENSON: Yeah, that’s a bullsh*t loss. But that’s my fault because I went 9 months, it was a lot of months without a fight, and I had bad people around me—bad people and a bad manager who were running me. I just took the fight like that. I didn’t really get into training for this fight, because I heard Darnell Boone was an easy fight and I just took the fight. When I fought him in the ring I was not 100%. So in the first round I dropped him on the floor, and in the second round he caught me with a very good right hand. I go down and I get up. I was really okay, and he started to count me, and the ref just stopped the fight. I was really shocked about that, because you know the referee is not supposed to stop the fight like that. So he stopped the fight, and I said, “Okay”. He stopped it and I learned about that, too. I learned that for next time. Any opponent I fight or any boxer I fight, I want to be very prepared and I know when I’m very prepared. And I don’t want the bad people around me, and you know that was very, very unfortunate with your people around you. I changed all my people around me, and I have good people on my side finally. I have a good promoter, and a good trainer, so that’s very, very important about that, too.

CIANI: When you look at the landscape of the super middleweight division, the guy who is considered the best right now is Andre Ward. What do you think of Andre as a fighter and what do you think it will take for somebody to beat Andre Ward?

CIANI: What did you think of Ward’s last victory over light heavyweight champion Chad Dawson, and did you think that Dawson coming down in weight had a big negative impact on his performance?

STEVENSON: (laughs) You know that’s a bad move for Dawson. It was not smart. Dawson was not a smart move for doing that, because this guy is a big 175 pounder, and he goes down to 168 and he was really draining. So Dawson, I think any guy at 168 pounds who was stronger was going to knock him out because he couldn’t pull the trigger. He couldn’t pull the trigger because he was drained a lot. So after that fight I don’t know if he’s going to be the same Chad Dawson. He goes down to 168, and he fights at 175. That’s a big step down for him. That’s not the same weight, and he went down very, very easy because Chad is a big 175 pound guy. He’s very big. It was not smart when he went down to 168 to fight Andre Ward.

CIANI: With you being guaranteed a shot at the winner of Froch and Kessler, can fans expect to see you get in the ring to keep busy? Or are you going to wait to see what happens with those two before you make any decisions on that?

CIANI: Great. Now Adonis, at 35 years old, what would you like to ultimately accomplish in your boxing career before all is said and done?

CIANI: For my final question, is there anything else you would like to say to all the boxing fans and all the readers of East Side Boxing?

CIANI: Adonis, thank you very much for your time. It was a great pleasure having the chance to speak to you again. I wish you the best of luck going forward, and I’m looking forward to seeing you in that title shot sometime this year.

STEVENSON: Oh, thank you very much.

CIANI: Thank you. You take care!