Eddie Hearn says Jermaine Franklin will have the opportunity to face Anthony Joshua if he defeats Dillian Whyte on November 26th on DAZN at the Wembley Arena in London.

Hearn states that the 29-year-old Franklin’s “bank account will go out of control” if he defeats former world title challenger Whyte (28-3, 19 KOs) next month.

Obviously, Franklin has been fully vetted and deemed harmless for the 35-year-old Whyte because otherwise, he wouldn’t have been selected as a tune-up opponent.

Franklin has been a guy that Whyte’s management has had in mind for him to fight since last year.

With Whyte having been knocked out in his last fight by Tyson Fury and needing a guaranteed win on November 26th to get a mega-payday against Joshua next year, Franklin has been selected.

Whyte’s fragile mandible and his advancing age, you can’t rule out a knockout victory for Franklin. We saw what the 41-year-old Alexander Povetkin and the non-puncher Tyson Fury both did to Whyte. Even Oscar Rivas had Whyte down on the canvas in 2019.

“He’s got a chance to change his life. If Jermaine Franklin beats Dillian Whyte he’s pretty much nailed on to fight Anthony Joshua and make millions and millions of dollars,” said Hearn.

“You do realize that if you win the fight, your bank account will go out of control, don’t you? He’s [Whyte] coming off a defeat, he’s an elite heavyweight. You’re looking to change your life. You have the opportunity,” said Hearn to Franklin.

“Stay tuned and watch for the fireworks. It’s going down. Hopefully, I knock him down, and he stays down,” said Franklin about Whyte.

“This is a staying down fight. I’m here to snatch the torch, and I’m here to prove why I was called for this fight,” Franklin continued. “I’m here to prove my skills in the ring and prove my abilities and show the world why I should be up there with the top fighters.

“I feel like I’ve got the skills to compete against the top guys, and I’m going to shock the world with why I need to be up there and why I deserve to be up there.” 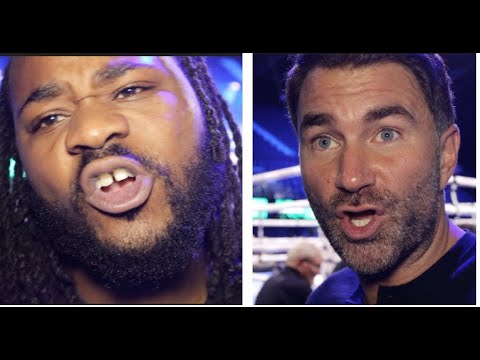