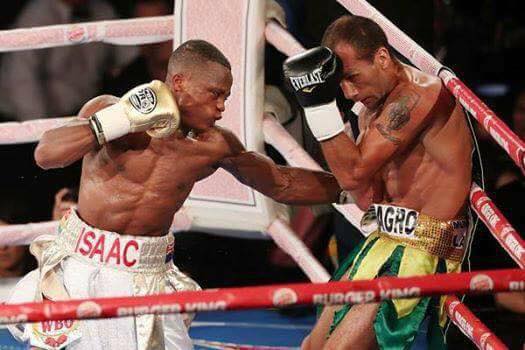 The 22 year old Ghanaian whizz kid improved his undefeated career record to 16-0, 10 KOs after dominating the vastly experienced Aristule (now 32-7, 16 KOs) all fight long before finally knocking out the Argentine in round seven of the fight between number 8 and number 9 ranked contenders to the WBO world title held by Jesse Magdaleno of the United States.

In the end, Dogboe who was recently named the WBO’s African boxer of the year underlined his credentials with the brilliant show in New Zealand and could potentially earn a shot at Magdaleno early next year.

In the main bout, Joseph Parker won the WBO heavyweight world title courtesy a close majority decision, 114-114, 115-113, 115-113 over Andy Ruiz whilst Jeff Horn won a 6th round TKO over Ali Funenka on the undercard.

Ghana’s Isaac ‘Royal Storm’ Dogboe and Julian Evaristo Aristule of Argentina both made a weight of 121.8 lbs on Friday ahead of their fight for the vacant WBO International and Aristule’s WBO Latino super bantamweight titles as well as final eliminator for the world title held by American Jesse Magdaleno tomorrow in New Zealand.

Undefeated Dogboe (15-0, 9 KOs) faces the vastly experienced Aristule (32-6, 16 KOs) on the undercard of the Joseph Parker versus Andy Ruiz WBO world heavyweight championship at the Vector Arena in Auckland in the early hours of Saturday Ghanaian time.

The 22 year old Ghanaian, recently named the WBO African boxer of the year has moved down in weight to take this fight but says that will be no hindrance when he steps into the ring tomorrow, and has promised to stop his opponent come fight night.

“We have worked hard and very confident of making our country Ghana proud, it’s the best gift we can give them after another peaceful elections. We assure all Ghanaians of a knockout victory, we are bringing the titles home,” said Paul Dogboe, father and trainer of the boxer.

Dogboe vrs Aristule on the undercard of Joseph Parker versus Andy Ruiz WBO world heavyweight title fight from the Vector Arena, Auckland, New Zealand can be watched live across the world on BoxNation beginning 08.30 GMT on Saturday 10 December, 2016.