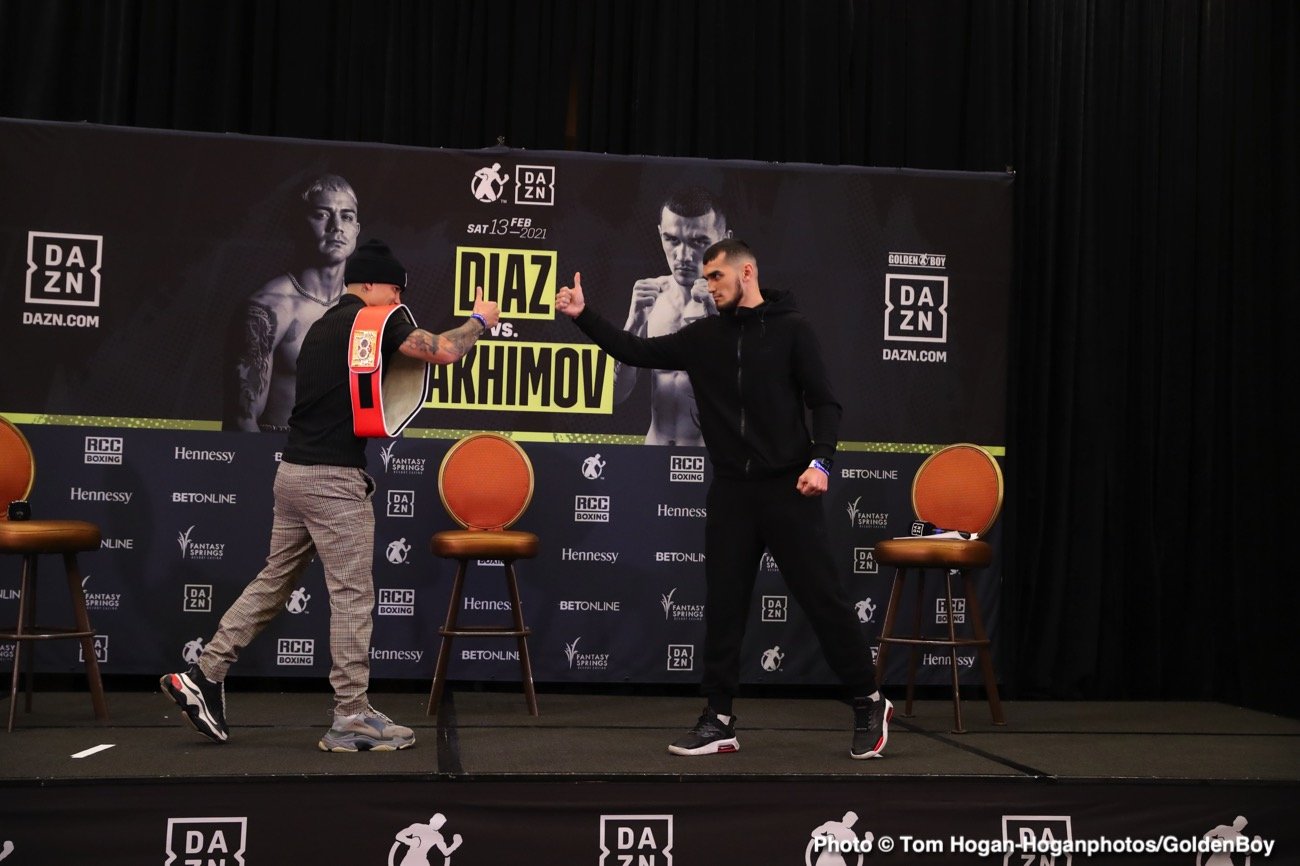 A busy fight night is upon us for Saturday night featuring a wide variety of fights spread across the ESPN and DAZN platforms. On ESPN the main event Joe Smith Jr. challenging Maxim Vlasov for a vacated 175-pound belt unfortunately is off now due to Vlasov testing positive for Covid-19.

Topping the DAZN card Joseph Diaz Jr. makes his first defense of a 130-pound strap he took off of Tevin Farmer against unbeaten contender Shavkatdzhon Rakhimov. The main event should provide show fireworks, to say the least. But the fight that may steal the show as the co-feature is a long-awaited mandatory challenge from Brian Carlos Castano facing Patrick Teixeira.

Let’s begin with the co-main, which has taken a very long time to come to fruition due to boxing politics and of course Covid-19. The pairing has a nice side story as it’s not often a fighter crosses the street to a different platform which is the case for Castano under the PBC banner fighting Golden Boy fighter in Teixeira for the only belt the Premier Boxing Champions Jermell Charlo doesn’t own. Teixeira got his belt from a solid performance defeating the undefeated Carlos Adames. Patrick’s vacated belt was dropped by Jaime Mungia when he decided to move up in weight class to middleweight.

Teixeira’s best pro outing in the win over Adames with Nathaniel Gallimore and Curtis Stevens on the resume. Patrick got by Gallimore but was stopped in the 2nd round by technical stoppage by hard-hitting Stevens in 2016. Born and raised in Argentina, Brian Carlos Castano is looking to secure a title and move on to bigger and better things on his side of the PBC street. The life of a boxer in this business can be very rough and filled with shady characters and despicable occurrences. Case and point, Castano beat Michel Soro in 2017. Brian had been in line to fight a more lucrative opponent in Erislandy Lara. Traveling to France Castano got his hand raised on fight night but didn’t receive full payment for 10 months.

Castano did get to fight Erislandy Lara a few months short of 2 years ago resulting in a split-decision draw that some thought he had done enough to get the nod. Long story short, Castano never got a rematch with Lara and was stripped by the WBA. Soro never fought for that secondary title and somehow Lara won it from a walk in the park dusting of Canelo Alvarez’s brother Ramon. Later that same year Castano was able to stay busy with a 5th round stoppage of Wale Omotoso. Neither fighter was active in 2020 so rust ring will be a factor one can only assume.

When it comes to ring rust both men will be affected, it is possible Teixeira relying on timing and movement could be disrupted a tad more. Of course all fighters rely on timing to an extent or at the very least a rhythm and a certain level of sharpness so will have to see in the opening rounds how much it will play a part in the outcome. Castano will be the aggressor and as long as he uses upper body movement and a jab on the way inside he should be able to have success after a few rounds. Castano will attack with left hooks to the body and head, at times shortening it when up close. Look for overhand right’s by Castano to find a home often either behind the jab or lead rights hands.

Teixeira likes to apply the jab a whole lot along with foot movement to help use that long reach advantage. In recent bouts Patrick’s it’s clear as day to see the defensive vulnerabilities especially susceptible to right hands, also his transition from defense to offense has a pause or hitch that slows down the delivery of his punch allowing his opponents time to react. According to Compubox, Castano throws the most punches at junior middleweight per round 77 and Teixeira comes in second with 65 per round making the perfect formula for a good scrap. Early point-scoring by Teixeira won’t last all that long as Castano takes over control of the fight and lands the harder blows.

My Official Prediction is Brian Castano by late TKO.

Jo Jo Diaz Jr. put together his finest hour at the pro ranks with a decisive outing resulting in a victory over then 130-beltholder Tevin Farmer. Joseph’s only loss came in a competitive bout against the fast hands of Gary Russell Jr. In 2016 Diaz Jr. defeated Andrew Cancio and Jayson Velez on his way to earning his title shot as a mando in the WBC. His opponent is 15-0 (12KO) Shavkatdzhon Rakhimov who resides in Russia and is making his first title bout appearance. In 2019 Rakhimov beat a 14-0 prospect Azinga Fuzile by 8th round TKO as he sets his sights high in the early part of 2021.

There’s a decent chance Rakhimov will allow Diaz to set the pace. That could be the case, obviously from a fans perspective and based off watching two separate fights recently there’s a chance they could meet in the middle of the ring and let it all hang out. This podcaster is not calling for this fight to look like world war 3 but the styles do line up well so let’s hope for the best. Diaz will throw lefts hooks to the head and use both hands to rip body shots, something that Rakhimov’s high guard doesn’t bode well with. Shavkatdzhon does have some pop on his jab and loves to throw straight lefts hands. He also won’t be hesitant to cross the line if Diaz wants to make it a dirty affair on the inside.

The fighter who remains active for the better part of this fight will have the upper hand. That combined with Rakhimov’s issue with left hook defense will be the difference-maker in favor of Daiz. Expect a fun fight filled with two-way action but Daiz mixing his punches to body and head to overwhelm and wear down Rakhimov in the end.

My Official Prediction is Joseph Diaz by Unanimous Decision.

Side Note: Don’t forget to pay attention to DAZN and ESPN undercard bouts such as Richard Commey vs. Jackson Marinez, Ronny Rios vs. Oscar Negrete, and Adam Lopez vs. Jason Sanchez among others. 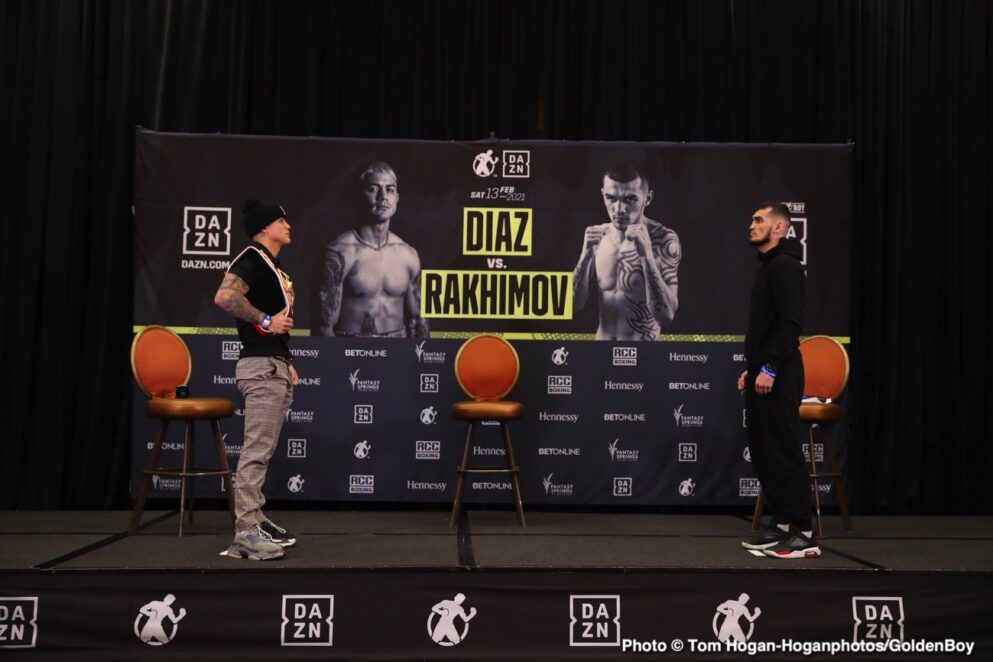 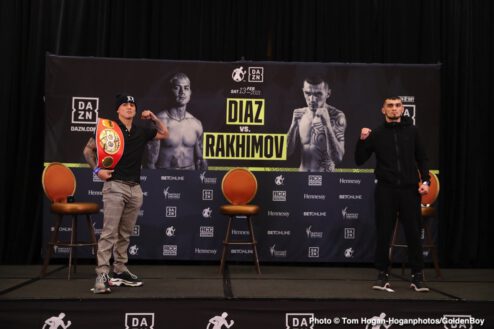 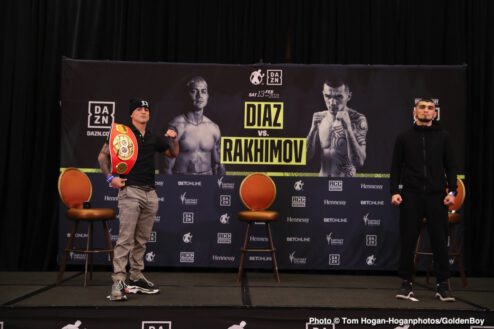 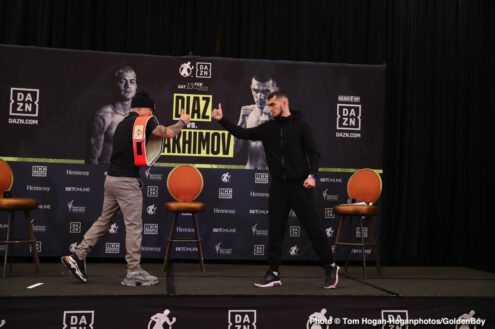 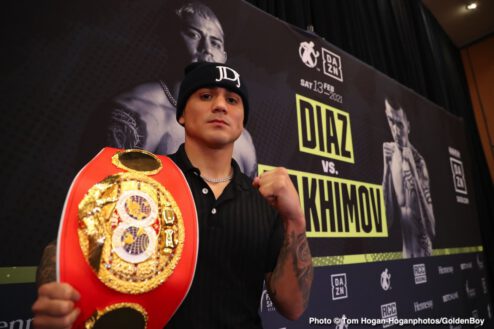 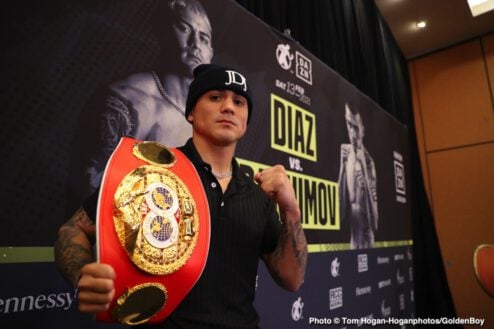