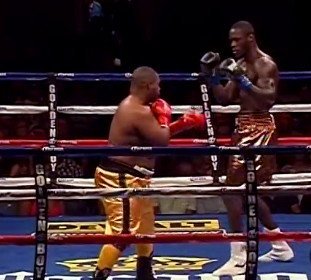 By B.J. Garnett: The March 15th WBC heavyweight eliminator bout between Deontay Wilder and Malik Scott is one of the more exciting fights to be made in the last few years. It is considered a step up fight for Wilder and a last chance of sorts for Malik Scott. While Scott more experienced and one of the best pure boxers in the division, his lack of pop is truly a evident and as it was nearly impossible to keep these 250lb guys off you when you can’t get their respect.

With Wilder, pop isn’t a problem. Thirty knock outs in thirty fights will leave no question about the pop but people want to know if he is a one trick pony or will he be able to keep this up against the top competition in the division.

If Wilder can’t beat Malik Scott, he won’t stand anything other than a punchers chance against Klitschko. With that being said, I’m shocked that this fight was even made because although hasn’t faced anyone, he is a couple of tomato cans away form a title shot. Don’t believe me?

I have been looking at the heavyweight division and one thing is obvious, it’s Wladimir Klitchkso and then there is everybody else. The crazy thing about it is that none of the so called contenders are fighting each other. For example, Klitschkso will be defending the WBA, IBF, WBO and IBO world titles to Alex Leapai (30-4). Not to discredit Leapai’s record but other than a win against a 33-0 Denis Boytsov, he has faced nobody I would consider a contender. With losses to Kevin “Kingpin” Johnson (29-5-1), Colin Wilson (33-23), Baden Oui (2-2) and Yan Kulkov (12-2).

Leapai’s best wins came in a good stretch in 2010 when he beat Travis Walker, Owen Beck, and Darnell Wilson in consecutive fights. All decent fighters but nobody that would be considered a serious contender. Consider the fact that before Leapai fought Boytsov, he fought (16-6) Felipe Romero, (2-4) Joe Lloyd and (13-8) Matt Hicks. How does a guy with six pro fights with four of them being losses even get a shot at a guy in line for a title shot?

Klitschkto’s defense before that was Alexander Povetkin, whom while deserving of the fight, actually turned the fight down for a couple of years because he knew he wasn’t ready. It’s hard to get ready for the best heavyweight on the planet when you are fighting the likes of Andrezej Wawrzyk, Hasim Rahman, Marko Huck (a cruiserweight), and Cedrick Boswell.(who?) Klitschko’s opponent before that was Francesco Pinata who got a title shot by beating Nelson Dominguez, 44year old Frans Botha and 45year old Oliver McCall. (Really?) Wlad’s defense before that was against Maiusz Wach who got his shot by beating up on the likes of Tye Fields, Jason Gavern, Kevin McBride and Jonathan Haggler. (Huh?)I could go on and on but I don’t want to kill you with names that you don’t know. At the same time, that is the point I’m stressing here. It has become a joke that you have to fight exactly nobody to get a shot at the heavyweight Championship of the world.

There was a time when you had to be tested before you were put into the fire where as it now seems that all you need is a shiny record, a good promoter to get you a shot. I consider it a shame that the heavyweight division has become so fraudulent that heavyweight title fights aren’t even on television anymore. And don’t tell me it’s because Klitschko prefers to fight in Germany because there are more and more European fights that get televised in the states. Froch v Groves will be on HBO and it will be huge in America. It’s because nobody has been given the chance to excite us.

Champions are only supposed to face the best but in order for this to happen the contenders need to weed themselves out by fighting each other and that frankly hasn’t happen in the last five years. Leapai is ranked #1 by the WBO and has faced nobody that is in the top 10. How does that happen? This is not the fighters fault. It is a system that has failed us, governing bodies that have their priorities backwards and promoters worried more about getting a fighter to a title shot rather than building up a fighter who could one day be a champion.