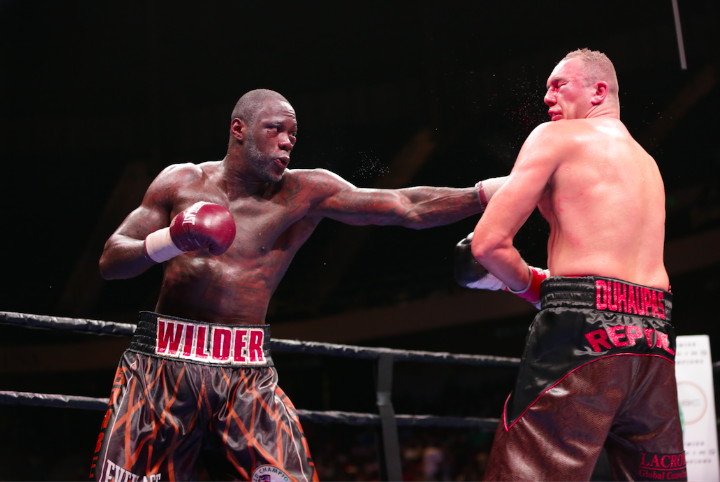 (Photo credit: Lucas Noonan/Premier Boxing Champions) “No question this was the toughest fight in the career of Deontay Wilder.” – Marv Albert on Wilder’s 11th-Round Knockout

“Wilder is going to learn more from a fight like this than a quick one- or two-round knockout. He’s going to come away from this a better fighter.” – BJ Flores

Following are notes and quotes from tonight’s telecast:

“Sugar” Ray Leonard on Wilder: “As much as I want to take credit myself, without question the heavyweights really brought the spotlight to our sport. For years the American heavyweight champion was as famous as anyone around the world. Deontay Wilder has all the ingredients that can make that true again.”

Leonard on Wilder: “[The height] is what makes Deontay so dangerous. He knows how to use his size to his advantage. His height allows him to punch downhill to generate that power.”

Evander Holyfield on Wilder: “Deontay starts out fast…he’s the only fighter to come out like that other than Mike Tyson. He has the potential to be one of the greatest fighters ever.”

Marv Albert on Duhaupas: “He is the ultimate underdog. This is the fight of his life.”

Liam McHugh on Wilder: “For 29 year-old Wilder, it has been a remarkably rapid rise to the top of his profession. Ten years ago, he had never stepped inside of a boxing ring, but, Wilder had the natural ability and work ethic to make the ascension.”

BJ Flores in Round 1: “If you’re Wilder, you don’t want to get too riled up. Wilder is very heavy-handed, so just be patient and look for opportunities when they crop up.”

Flores on Duhaupas in Round 1: “He’s trying to get close to Deontay to make him uncomfortable.”

Flores on Wilder in Round 2: “This is all a learning experience for Deontay. He’s only been the heavyweight champion for two fights now.”

Leonard on Wilder in Round 2: “Wilder is very comfortable; he’s just picking his shots…his jab is a thing of beauty…a serious weapon.”

Albert: “Not a lot of people thought this would go into Round 3.”

Albert: “Duhaupas telling us several times yesterday that he felt all of the pressure was on Wilder who is fighting in his home area in Birmingham, Alabama.”

Flores in Round 3: “Duhaupas is not intimidated.”

Leonard in Round 3: “Wilder needs to keep those hands higher…especially to protect that [swollen] left eye.”

Flores on Round 3: “Duhaupas took some really great punches [in Round 3]; I’m really impressed he’s hanging in there.”

Albert at the end of Round 3: “Somehow Duhaupas is on his feet.”

Flores on Duhaupas, 30 seconds into Round 4: “He’s swinging for the fences with that big right uppercut.”

Leonard on Wilder’s jab-cross in Round 4: “That left hand on Wilder is like a measuring stick for his right hand.”

Albert on Wilder’s punch-landed statistics through Round 4: “[He has a] commanding edge…but Duhaupas continues to hang in.”

Flores on Wilder in Round 5: “That right uppercut is a game changer.”

Albert on Wilder’s swollen eye in Round 5: “That eye is a target. You can see Duhaupas aiming for it.”

Flores on Duhaupas in Round 5: “He’s shown the kind of mental toughness…he’s definitely proving a test to a young champion.”

Albert heading into Round 6: “Referee Jack Reiss warned Duhaupas, ‘Show me something or I’m stopping it.’”

Albert in Round 6: “That left eye of Wilder nearly closed, and obviously the realization that he better put this to an end.”

Flores in Round 8: “Wilder is going to learn more from a fight like this than a quick one- or two-round knockout. He’s going to come away from this a better fighter.”

Flores on Wilder in Round 10: “A lot of times when you get those knockouts in early rounds early in your career, it’s tough to know how to compose yourself in the later rounds.”

Leonard in Round 10: “At one point, it looked like it was over, but Duhaupas said no, and has come back strong.”

Albert on Wilder’s 11th Round win: “It’s over! Deontay Wilder has won over Johann Duhaupas in the 11th Round, and it was not easy…no question this was the toughest fight in the career of Deontay Wilder.”

Leonard on Wilder’s 11th Round win: “A long night, but a magnificent night. He should be extremely happy, proud of himself. Great fight for both guys.”

Flores on Wilder’s 11th Round win “I think his toughest fight is one that he remains to earn. But, he showed a lot of things tonight. He took some punches, he had a very durable and tough guy in front of him…this time he got the stoppage victory late in the fight and that’s what boxing fans want to see, a late-round knockout in the heavyweight division.”

Albert on referee “Gentleman” Jeff Dodson: “[Dodson] was once a heavyweight in the Toughman competition, he beat the famed ‘Butterbean’ Esch on two occasions….so I don’t think these two heavyweights are going to be messing with ‘Gentleman’ Jeff.”

Flores on Breazeale in Round 4: “He has to be careful not to punch himself out on the inside. You have to let your shoulders do the work.”

Flores on Kassi pinning Breazeale in the corner in Round 5: “Kassi needs to get Breazeale into these deep corners in rounds five and later on. Breazeale doesn’t have a lot of experience in these later rounds and Kassi does.”

Leonard on Kassi in Round 5: “As awkward as Kassi is, his defense is effective.”

Flores in Round 7: “The counterpunching of Kassi has slowed down the attack of Breazeale.”

Leonard on Breazeale in Round 7: “Breazeale has to mix his punches up and become more aggressive.”

Albert: “This fight against Kassi is the best test that Dominic Breazeale has faced in his career.”

Flores in Round 8: “Breazeale needs to apply smarter pressure these last few rounds.”

Flores as Breazeale lands body shots in Round 8: “The more he goes for the body, the more successful he’s going to be, because he’s not going to miss and he’s going to take some gas out of the tank in Kassi.”

Albert in Round 10: “This is one of those fights that are going to be very difficult to score if it does go to decision…these guys have gone toe-to-toe right from the opening round.”

Albert on Breazeale’s unanimous decision win: “Not the way we saw it…we were talking certainly close.”

Flores on Breazeale’s unanimous decision win: “I can’t believe it.”

Leonard on Breazeale’s unanimous decision win: “What fight were they looking at? This is ridiculous.”