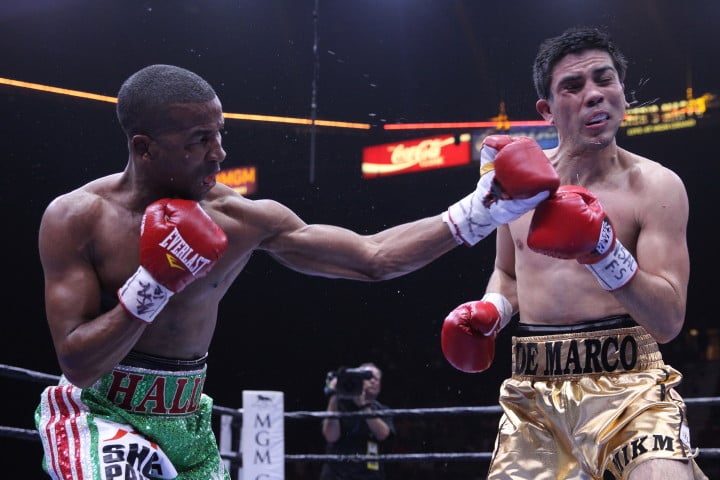 Despite being deducted a point in the ninth round, Barthelemy won by the score of 99-89 on all three judges’ scorecards.

Vasquez got off to a fast start winning the first three rounds by using an aggressive southpaw style to deliver numerous combinations to the head and body. Omotoso was eventually able to slow down Vasquez a bit with an increased offensive output and strong counters.

Despite blood pouring down over his face, Vasquez finished strong to pull away. . Vasquez out-landed Omotoso 162-134 while landing 50 percent of his power punches, per CompuBox.

“I worked very hard with my trainer to prepare for this fight and that preparation helped me catch DeMarco in the fourth round and I dropped him.

“My left helped me a lot tonight. I stayed true to the Cuban boxing school, and when I saw an opening I threw the other hand to keep him guessing.

“I’m blessed to be in this position. Coming from an impoverished upbringing in Cuba to fighting on a PBC card on CBS is unbelievable.

“I want Omar Figueroa next. It would be like a modern day version of Diego Corrales vs. Jose Luis Castillo.”

“I was waiting to counter and he landed a strong left in the fourth when I went down.

“I fought my fight and my style. One has to learn how to handle losing, and he was just the better fighter tonight.

“This was a great opportunity on CBS, but unfortunately we weren’t able to accomplish our objective.

“Right now I just want to go home to my family. I don’t know what’s next. I’m going to think hard about whether to retire or continue fighting.”

“Wale’s a tough competitor. Obviously I haven’t tested like this previously.

“My objective was just to box him, move around and not let him hit me because I know he has the power that his record shows. He does hit kind of hard, but it’s not anything I haven’t seen before.

“I knew I had him hurt in the ninth when I connected on a solid body shot.

“I carry Pittsburgh and Monessen on my back. I’d like to be fighting there, but Las Vegas is the mecca of boxing and all the greats have fought here. I have an exciting fighting style and I like to bring that to my opponent like I showcased today. I hope that I created some more fans that want to follow me.

“With everyone watching on CBS this was an incredible opportunity for me and my career. I want to thank all the fans that watched for helping me grow my fan base.

“It’s awesome to fight on Father’s Day. My dad has been my backbone from the very beginning. I started boxing because I was getting bullied. We’ve had some struggles in this game, and everything I’ve been through with my two tours of Iraq. He’s always been my backbone and I’m just so blessed to have him in my corner.

“I don’t know what’s next yet. I don’t have a specific opponent in mind and I don’t want to call anyone out. Beating Wale was great, but we’ll go back to the drawing board and consider who’s out there for me.”

“I thought it was a closer fight, but that’s the judges’ job. It was a good fight for sure.

“I was hurting him with the left jab and some hard rights. That’s why he was bleeding.

“He caught me with a good right, but I wasn’t really hurt. He’s sharp with his left though and kept me a little off balance.

“This was a great opportunity for me. It was great exposure and people will know me now.

“I’ll fight anybody they want to put in front of me.

The card was promoted by Mayweather Promotions in association with TGB Promotions.