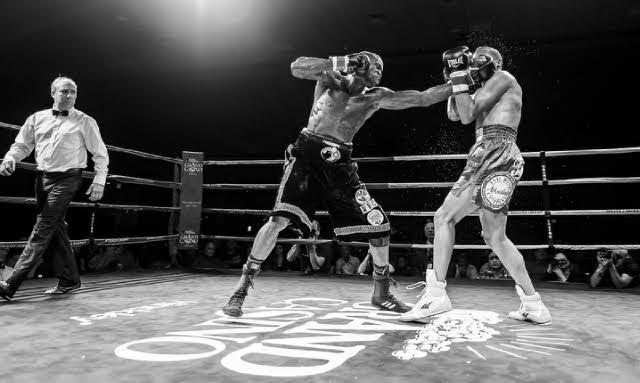 The confident, tenacious, and hard-working orthodox middleweight pugilist Marcus “Arillus” Upshaw (17-13-4, 1NC, 8 KOs) is a firm believer that he’ll be a world champion in the near future.
“My uncle, the late Gene Upshaw, a NFL Hall of Fame offensive tackle for the Oakland Raiders always told me that I can accomplish anything that I set my mind to, and that is what I aim to do by becoming the best boxer in my weight class,” said Upshaw.

Upshaw’s opportunity to become a world champion continues as he takes on hometown favorite Lanell “KO” Bellows (12-1-1, 7 KOs) this Sunday, June 21st at the MGM Grand in Las Vegas. Upshaw is moving up to the super middleweight division and fighting in his opponents’ backyard for this bout, which he has done throughout his career.

“Bellows has never fought anyone as good as me. Even though I’m moving up in weight, I’ll be the better and more powerful boxer in the ring,” said Upshaw. “I’m not going to let the fight go to the scorecards and suffer another horrible decision like I’ve in the past; instead I’m going for the knockout victory.”

Upshaw has remained focused, positive, and more determined than ever to get his career into a position to contend for a world title. The 34-year-old native Floridian recently added one of the best trainers in the sport to his team: Orlando Cuellar. Cuellar has worked with a number of world title-holders, most notably, former world champion Glen Johnson. This will be the second bout that Upshaw and Cuellar have worked together on in Miami.

“I believe training with Cuellar will be the missing piece that will help me take my career to the next level,” said Upshaw. “This is the first time that I worked with a prestigious trainer and I’m vastly improving my skills each and every day.”

Upshaw is confident that with Cuellar in his corner, he can reduplicate his success that he had a couple of years ago when he strung together two impressive victories: a fourth-round knockout over former undefeated prospect Ashandi Gibbs to claim the vacant Florida State Middleweight Championship Title and later shocked rising contender Renan St. Juste by winning a ten-round decision. Following his victory over St. Juste, Upshaw was ranked sixth by the International Boxing Federation, ninth by the World Boxing Organization, and eleventh by the World Boxing Council.

After a quickly glance at Upshaw’s record, boxing fans may wrongly assume that he has no opportunity at fighting for a world title. However, upon closer examination, his record proves a bit misleading. He has faced very tough competition over his nine-year professional career, taking on world champions, top contenders, and rising prospects. A great deal of those bouts were taken on short notice, at a higher weight class than his natural 160 pounds, and in his opponents’ hometown throughout the United States, as well as in Mexico, Canada, and the Dominican Republic. He fought former world titleholder, Marco Antonio Rubio, former world title challenger, Edwin Rodriguez, and David Lemieux. Although he lost these bouts, he went the distance and gave them a competitive match.

“Unlike the vast majority of boxers today who pad their records by fighting nobodies, I’m an old school boxer who always fights the best available opponent and has never ducked anyone,” said Upshaw. “Fighting really good opponents has made me a much more experienced and better pugilist and demonstrated to the boxing world that I can compete with anyone in the middleweight division.”

Upshaw has also had his fair share of bad decisions that went against him including his last two outings, versus Aaron Pryor, Jr. and Anthony Mack. Upshaw dominated Mack for eight rounds and staggered him several times throughout the bout, nevertheless he settled for a tough luck draw. Prior to that fight, Upshaw out worked and out landed Pryor, Jr. and controlled the vast majority of the matchup yet received an eight-round draw. Earlier in his career, he suffered a questionable ten-round draw to James Buddy McGirt, Jr. as well as an extremely controversial eight-round loss to then undefeated, Tarvis Simms, in a bout that many individuals at ringside believed he won.

“It`s exhausting and extremely difficult to deal with the bad decisions that I received over the years. When you train so hard for months to be mentally and physically prepared for the fight and dominate your opponent and then receive a draw, it’s very discerning,” said Upshaw. “These bad decisions, especially the last two bouts, taught me that I need to go for the knockout more often in fights, as oppose to leaving it up to the judges. There is too much politics in boxing, which is not an excuse, just a fact.”
For more information on Upshaw, visit him at facebook.com/pages/Marcus-Upshaw or via Twitter: marcusupshaw904.

“I’ll be a world title holder,” said a confident Upshaw. “I’m one of the toughest, hardest working, and most mentally strong fighter out there and these attributes will help me become extremely successful in the ring. I’ve not reached my full potential. The middleweight division should lookout for me because I’ll be at the top of this division in the not too distance future.”