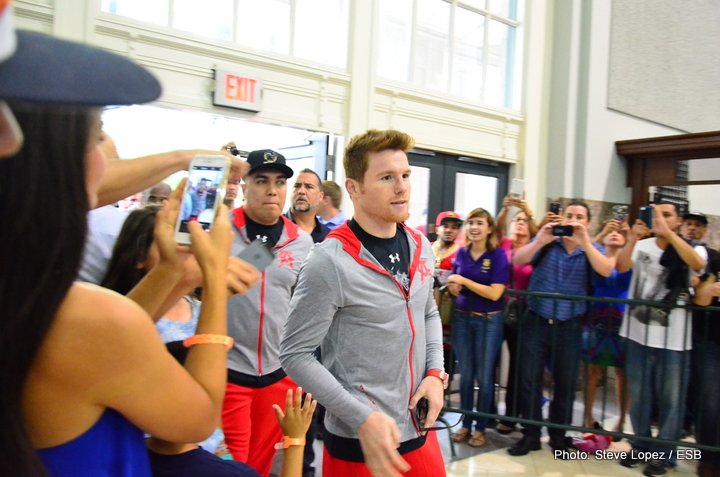 Houston, TX takes the boxing center stage once again this coming May 9th live from the Houston Astros’ Minute Maid Park. Day 2 of fight week festivities continued with the top main event and undercard fighters engaging in brief workout sessions for the fans as well as autograph and photograph sessions.

The fighter workouts were reminiscent of Las Vegas’ version of fighter “grand arrivals” for top events at the MGM Grand Hotel & Casino.

Granted, this isn’t Vegas. This is Texas….and things are still known to be big in Texas.

Speaking of big, fans got the opportunity to see Taishan, a behemoth of a heavyweight prospect. As he dwarfed Buddy McGirt during his workout session, one can only wonder if this can be the next foreign heavyweight sensation. At a tender record of 3-0 (2 KO’s), it’s obviously very early to make such bold predictions in terms of dominance as he remains unproven. His Houston bout is expected to be showcase fight. Through time and the right path/promotion, Taishan will be on insiders’ radar in the future provided that he consistently wins in impressive fashion.

Looking to get back on the top Light Welterweight contender list, Humberto Soto returns to the ring after his last performance with John Molina last year. A veteran with over 60+ wins, Soto will be pitted against unbeaten star Frankie “Pitbull” Gomez in the co-main event. Soto does not want to just be the gatekeeper. He’s here to show the up and coming star how the big boys play. The co-main event a great supporting bout that promises action.

On hand were the two main even stars to pump up the crowd. Kirkland did fine work shadow boxing as well as working the mitts with his new team. A rejuvenated Kirkland is blossoming with confidence using his new team even while many doubt he will perform the same way he’s done so with past trainer Anne Wolfe.

Alvarez was humble with the fans and appreciative for everyone’s support. Though he did not engage is brief shadow boxing of mitt work, he address the crowd and took some time to greet the fans.

The star selected to throw the first pitch to the Astros-Rangers game was James Kirkland. After a long day addressing the press, media and fans, Kirkland still did an outstanding job with the first pitch honors.
Additionally, giving love back to his fans at field level, he took the chance for a quick photo session at field level with the fans.

A true Texas native who knows his roots.

Day 3 continues with the final press conference on Thursday! Much more content on its way!