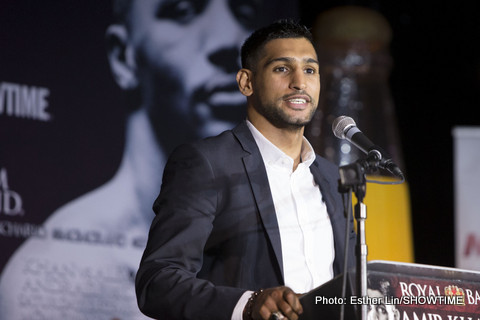 Britain’s former 140lb world champion Amir Khan, who fights American Chris Algieri on May 29th appears to have climbed down on his earlier insistence that any fight with Floyd Mayweather would only happen if Mayweather moved off his penciled in September date for the final fight of his Showtime deal.

The devout Muslim was previously thought to be left too little time following the period of fasting to train for a September Floyd fight, yet Sky Sports are reporting that the Virgil Hunter trained Khan has had a change of heart – no doubt fuelled by the mega-money a fight with Floyd can bring.

“Floyd only fights in mid- September and Ramadan ends a little earlier this year (July 17) which helps. It gives me enough time to get the training done.”

Surprise, surprise. Amir has realised that if he wants this fight – which he has for all intents and purposes been begging for for the last 2 years – then he will have to accommodate Floyd and not the other way around. I think everyone in boxing could have told Khan that a while back.

Speculation intensified after Saturdays fight – at which Khan was ringside – when he said he was approached by Mayweather Promotion’s Leonard Ellerbe after the final bell, who told him “let’s get it on.”

Khan firmly believes he has what it takes to trouble the ageing Mayweather – claiming that the “Money Man” is himself deteriorating;

“There were a few things that I’d not seen before. When he takes a good shot he does panic. The only way to catch him is with speed and explosiveness, which Manny had, but didn’t use enough in that fight.”

I don’t necessarily think it would be a bad fight for Floyd to end on as Khan does have a profile in America – it’s just a question of how big a one. To make the money he desires Floyd needs the American public on board first before he worries about anywhere else in the world and I’m not sure the American’s are sold on the idea in fairness.

Khan did look great against Devon Alexander and has performed at a higher level than some of the other names being linked to the fight like Keith Thurman or Kell Brook but that alone isn’t enough.

Everybody from Danny Garcia to a second fight with Cotto seems to be an option at the moment for Floyd so – at least for now Amir must go back to playing the waiting game and focus on Algieri.

Of that fight on the 29th he said;

“Winning this fight is everything to me. I’m not looking past Chris because I’ve made that mistake in the past. There are bigger fights out there for me, but right now this fight is my focus”

Bernard Hopkins Says He'd Come Back For A Return With Joe Calzaghe: We Can Do It On His Soil
Follow @eastsideboxing