Avanesyan, 34, will go to Crawford’s hometown to face him in the main event on BLK Prime pay-per-view.

It’s unknown why Avanesyan was picked out for Crawford rather than a higher-ranked, more deserving contender like Jaron ‘Boots’ Ennis. Still, it’s probably that Bud wants to play it safe, hoping to restart negotiations with IBF, WBA & WBC welterweight champion Errol Spence Jr at the start of next year.

Avaneysan has the power to beat Crawford, but technically, he’s out of his league. With Crawford, you don’t know what you’re going to get with him because he didn’t look good in Shawn Porter last year, and the only other somewhat decent fighters he’s fought at 147 are Jose Benavidez and Egidijus Kavaliauskas.

Crawford took punishment in both of those fights, showing that he’s not the same guy at 147 as he’d been fighting at 140 and 135.

“I’m coming into hostile territory, his hometown of Omaha,” said David Avanesyan. “I’ve fought most of my career in people’s backyards.

Avanesyan is going to be motivated for this fight, and he could do some damage to the 35-year-old Crawford. Kell Brook had Crawford’s face swollen after two rounds in their clash in 2020.

If Brook was able to do that to Crawford’s face in two rounds, Avanesyan could do far worse if he’s able to stick around long enough to put hands on him.

Again, Crawford chose Avanesyan for a reason, and he clearly doesn’t want to lose out on a chance of potentially fighting Spence.

Given how Crawford bailed on his negotiations with Spence and went public with criticism of him and Al Haymon, it’s unlikely that he’ll get the opportunity to restart talks. For that reason, Crawford may need to look for the best money fights he can get after this. If BLK Prime is willing to keep giving Bud Crawford huge money, it might not matter if he swerves Boots Ennis.

“I know going in that I’m a huge underdog, and no one is giving me a chance, but let me tell you, I’m going to surprise everyone watching,” said Avanesyan.”I’ve had enough time to prepare, so I’ll be ready for the southpaw.

“I’m going to do everything I can to become a world champion. I need to stick to the game plan we have in place, and if adjustments need to be made during the fight, I will have to make them,” said Avanesyan. 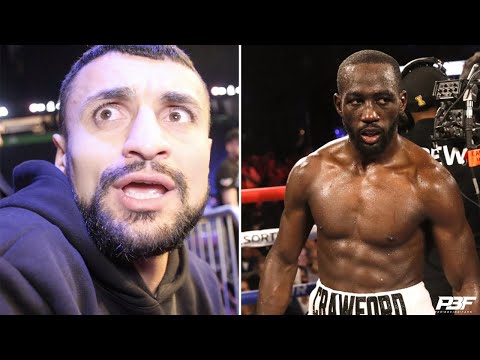