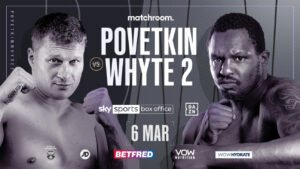 Eddie Hearn and Matchroom are delighted to announce details of their upcoming UK schedule following the British Boxing Board of Control’s confirmation earlier this week that Boxing tournaments under its jurisdiction will resume in the middle of February.… read full article “Povetkin – Whyte 2 rematch on 3/6” 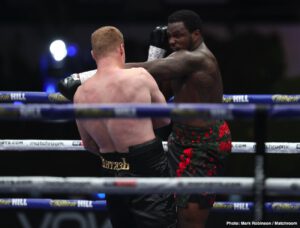 Matchroom promoter Eddie Hearn is hoping to make an announcement next week for five big shots starting from February 13th to April 10th in the UK, as long as he receives clearance from the British Boxing Board of Control.… read full article “Hearn working on Warrington – Xu, Povetkin – Whyte II, and Avanesyan – Kelly” 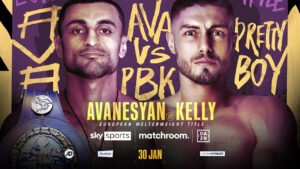 UPDATE: Following a ruling from the British Boxing Board of Control, the David Avanesyan vs. Josh Kelly event scheduled to take place on Saturday January 30 has been postponed.

In a statement, the BBBofC said: “Following the increase in COVID-19 cases in the United Kingdom and the effects such increases has on the NHS and the work of the Board Medical Officers, it has been decided that no tournaments under the jurisdiction of the British Boxing Board of Control will take place in January 2021.… read full article “Covid-19: Avanesyan vs Kelly Postponed Following BBBofC Update” 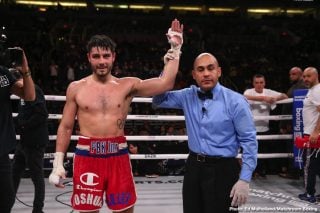 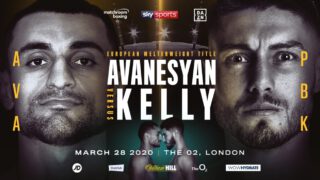 David Avanesyan will defend his EBU European Welterweight Title against undefeated rising star Josh Kelly in a bitter grudge match at The O2 in London on Saturday March 28, live on Sky Sports in the UK and DAZN in the US.… read full article “David Avanesyan defends against Josh Kelly on March 28 at O2 in London” 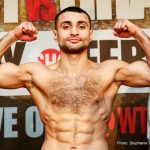 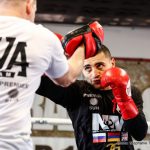 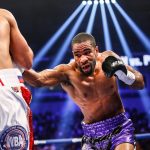 Lamont Peterson (35-3-1, 18 KOs) emerged victorious on Saturday night in handing WBA ‘regular’ welterweight champion David Avanesyan (22-2-1, 11 KOs) a clear 12 round unanimous decision at the Cintas Center, Cincinnati, Ohio. It was a good performance from Peterson, who came into the fight having been out of the ring since 2015. 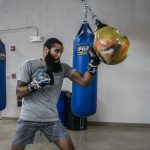 Former two-time world champion Lamont Peterson hosted a media workout in his hometown of Washington, D.C. as he prepares to take on WBA Welterweight Champion David Avanesyan in a 12-round matchup that serves as the co-main event of SHOWTIME CHAMPIONSHIP BOXING Saturday, February 18 from the Cintas Center at Xavier University in Cincinnati.

WBA Welterweight Champion David Avanesyan (22-1-1, 11 KOs) will defend his title against former two-time world champion Lamont Peterson (34-3-1, 17 KOs) in a 12-round matchup that serves as the co-main event of SHOWTIME CHAMPIONSHIP BOXING Saturday, February 18 from the Cintas Center at Xavier University in Cincinnati.