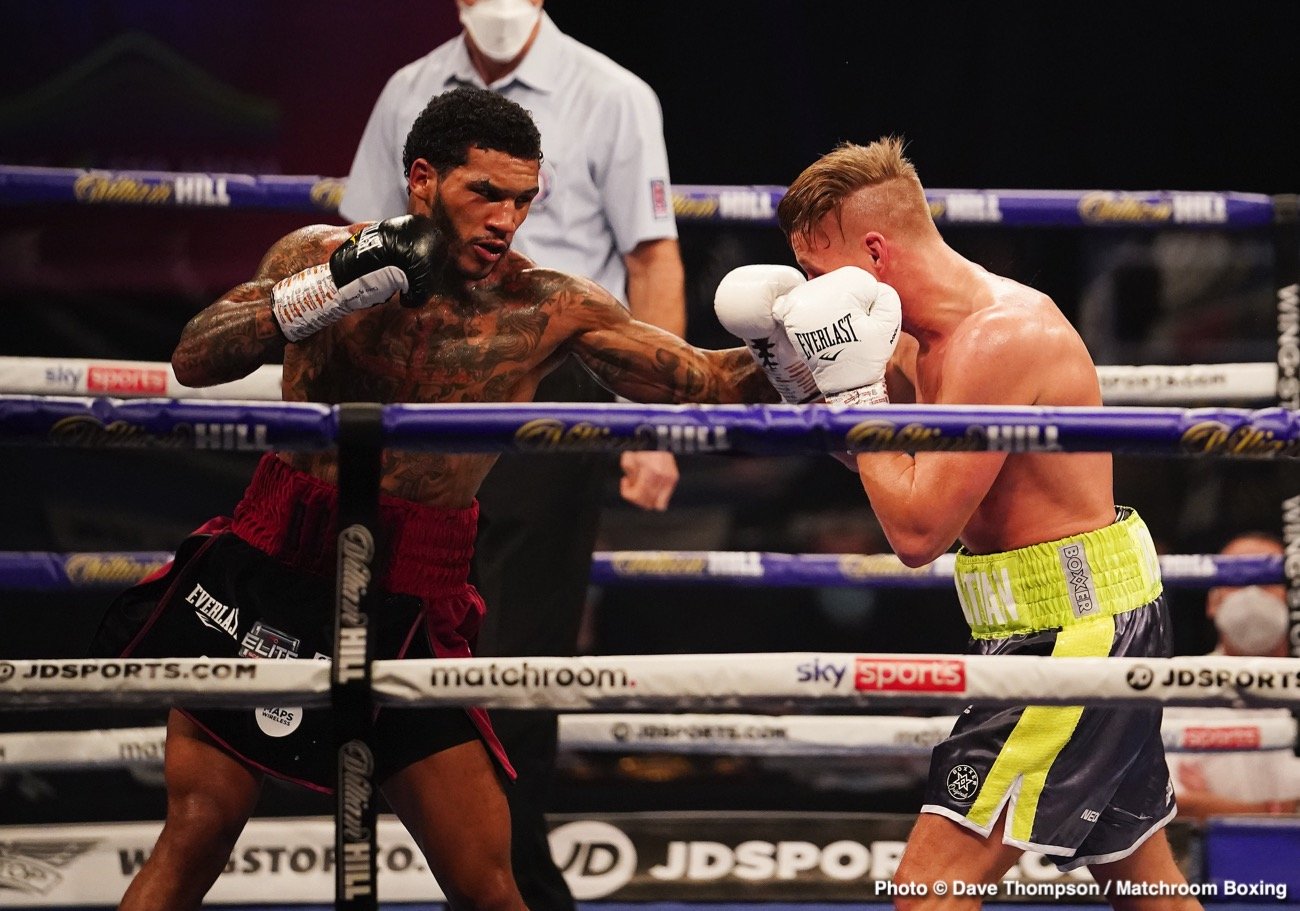 The 24-year-old outfought and outboxed Germany’s former IBO World Champion to take a unanimous decision on the judge’s scorecards and progress his record to 17-0.

“I just stuck to my boxing,” Benn told Matchroom. “I was hitting him with some hard shots. The guy just went 12 rounds with Shawn Porter, and I think I beat him more convincingly. I didn’t lose a round. It was an okay night’s work.

I’ve had harder spars than that. I’m not funny. I’ve been sparring with Middleweights and Super-Middleweights in 18oz gloves. They wear 14oz gloves, and I wear 18oz gloves. When it comes to punching power, if I’m not going to bang them out, I’ll wear them down.

“He’s a former World Champion, and I expected nothing less. I stayed cool and composed the whole ten rounds. I could have done 15. I’m barely breaking a sweat now. He tried it on the inside, and I beat him to the punches on the inside.

He tried it at the range, and I beat him to the punches at the range. I was quicker, faster, and stronger. People think their experience is going to get to me; what experience? Jussi Koivula got banged out in two rounds, and if they want to go ten or twelve, I’ll outbox them for ten or twelve.

“People will always question me because of my vulnerability. I’m hungry like I come from the ends. I’m hungry like I came from nothing. I fight like a starving man. You don’t need to come from poverty, come from having nothing, to be a great fighter. I have a great life. I live such a blessed life, but I still fight like a starving man because of that championship mindset, that hunger and will to win.

Fabio Wardley produced a stunning one-punch knockout of Richard Lartey to further enhance his status as one of Britain’s hottest Heavyweight contenders.

The unbeaten 25-year-old was testing himself at a higher level after winning the English Title in the summer, and he dramatically stopped Lartey, even quicker than current British Champion Daniel Dubois.

“The first round took some adjusting,” said Wardley afterward. “I like to use that first round to gather information, figure out my opponent, see where gaps are, see what’s going on. Just analyze the whole situation. I did that, took a few shots doing it, but that’s all part of the game. A bit of that chin check thing was ticked off for me. I can take a bang, and it’s not going to give me too much bother. We got through that first round, and I figured out what I would do from then onwards.

“I stung him with a few jabs, and I always say that those gloves came straight up in front of him. I fought to sting him with one and come around the side. That was the plan, and it came off perfectly. Nobody is ever going to grumble at an early night’s work. I get to go back and chill out now. I need to start getting those rounds in and get tougher tests. I’ve ticked that box of ‘do I have one-punch power?’.

“The comparisons are always going to come. Does knocking out Lartey quicker than Daniel Dubois mean I’m better than him? Does it mean I’d do the same to Daniel? Boxing isn’t that cut and dry. There’s a lot more to it. I take it for what it is. I beat Richard Lartey in two rounds, and I’m happy with that performance. I did well, and that’s all you take from it. We keep moving, and we keep working.”

Alen Babic toppled Tom Little twice in another brutal knockout win as the Croatian contender continued the blistering start to his Heavyweight career with a sixth straight stoppage.

Babic came charging out in the second round, swinging in spiteful shots as Little roared his defiance, but the Hatfield man’s resistance was broken in the third.

Little wilted to the canvas after a ferocious cluster of punches, and Babic sensed the end was near, unloading another powerful barrage that dropped his opponent by the ropes, prompting the referee to wave it off.

“Nobody can go three rounds with me. I had fuel in my tank for twenty like that. Filip Hrgovic bet against me; I’m so glad he lost money on me.

“I’m going to take Tom back to my Savage Army because he’s a good guy. He’s a good fighter, but he’s not even close to my level. He’s two stone heavier than me.

And I want you to write that down. I box every day. I don’t do anything out of the ring. My training is old school, boxing, sparring, and pads—just that. I didn’t do a single push up or pull up.

“I’m not faking anything. Hrgovic is a fake. I’m real, and I want to fight. I like fistfights. I think it was a beautiful fight. I want to give people entertainment. That’s who I am, and I’m always going to be like that.

Unless somebody tests me, I’m going to keep knocking them out. Give me a strong puncher, a knockout artist. You’re going to see the sweet science. I can do it. I can punch, and I have stamina. I have a strong head; you can’t beat that with muscles.”

Smith’s superior experience showed from the opening bell as he outworked the rugged Ridings to earn a 60-54 verdict after six rounds from referee Robert Williams.

“I’m over the moon,” Smith said afterward. “I can’t put it into words. I had a game plan, and I knew what I was going to do. I knew I had a good game plan, so I stuck to my boxing. I think it was a dominant performance.

The referee didn’t give him around. If I can box like that and do that when I’m not even 30% fit, imagine what I can do when I’m fully fit. I took this fight on five days’ notice; I’m not taking anything away from Ben; I knew I was levels above him.

“I’m a fighting man. As soon as I got the call to fight live on Sky Sports on a massive bill like this, I jumped at the chance. I’ll fight anyone. I’m going to get back down to Light-Middleweight.

Me and Ted Cheeseman have unfinished business from the amateurs. I and I had a fight called off after one round as there was fighting in the arena.

That would be an electric fight with fireworks. If he wants it, he can have it. I’ve put myself on the map, so hopefully, I can start using these big shows more.

“I knew tonight was my night. I knew I had to go in there and put on a boxing performance. I believe that’s what I did. He hardly touched me. I claimed every round. I think this is the biggest arena that I’ve fought in so far in my career.

I’m ecstatic and over the moon. I just want to say a massive thank you to Eddie Hearn and Matchroom for giving me this opportunity. I’ll be ready for the call when it comes again.”

The undefeated 24-year-old caught Cairns regularly with straight right hands, forcing the Liverpudlian’s corner to call a halt to the fight after the sixth round.

“And the new English Bantamweight Champion sounds good,” Davies told Matchroom afterward. “It is music to my ears. I’m just happy. I knew I could do it. It was just about getting in there and getting the job done, ensuring that everything went to plan. I felt like it did tonight.

“I still had a lot left in the tank. I wasn’t slowing down for anything. I was building up the pressure and putting my punches together. You’ve got to give it to him; he’s as tough as anything. He kept coming and coming! That’s why I didn’t go mad with it. I respected how tough he was and how game he was. Full respect for Sean, and I wish him all the best in the future.

“I’d give myself an eight out of ten. I know there’s still more to come from me. I just hope I get the chance to come again and show another level because this is just the start for me. I’m looking to build and get more belts around my waist.

“The show in Telford didn’t go ahead, but I landed on my feet fighting live on Sky Sports here, winning my first title. This is a memory that I will never forget and hopefully something that we can build on.

I don’t fold under pressure. If anything, I rise to it. I rise to the occasion, and next time I’ll rise again with bigger and better performance for another belt, hopefully. That’s the plan.

“I’m here to impress, and I felt like I did tonight. I did what I intended to do. I won in style. Most people would have gone over.

I hit him hard, and you’ve got to respect him for taking those shots. I don’t think most Bantamweights could have taken that power. Roll on whoever is next because I’m coming now.” 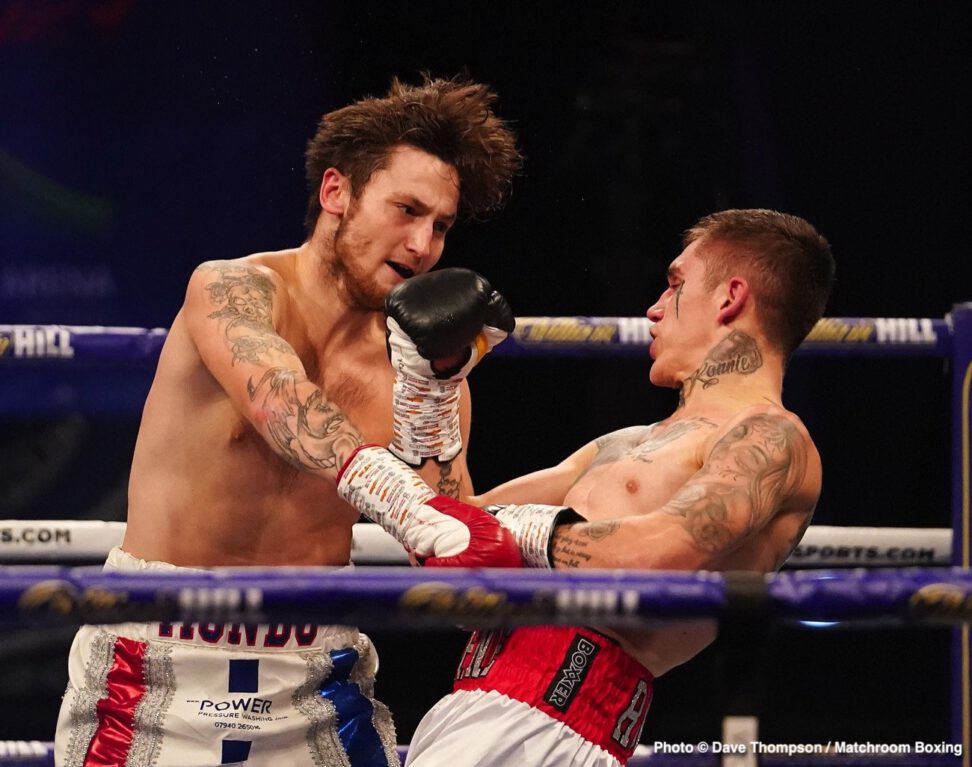 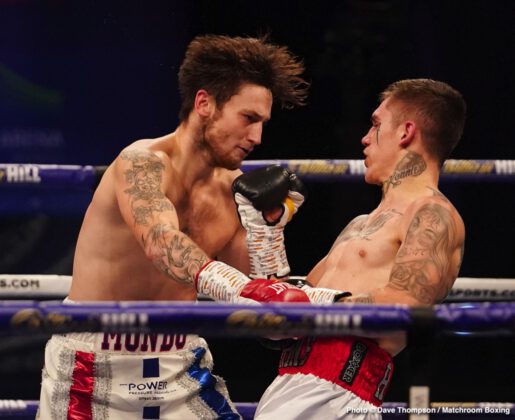 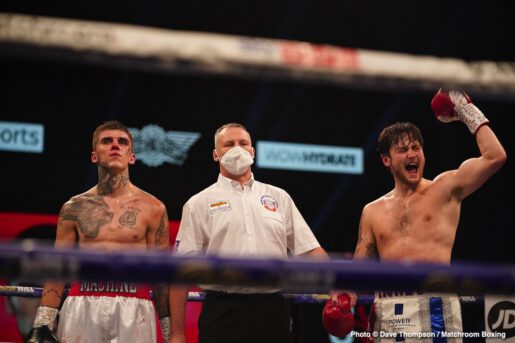 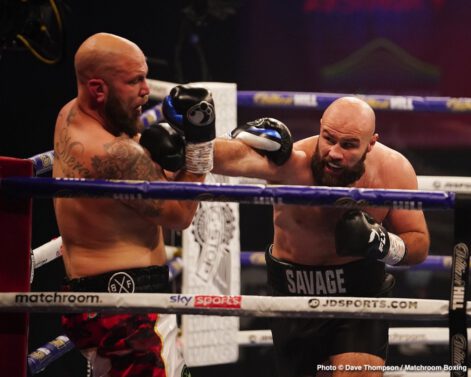 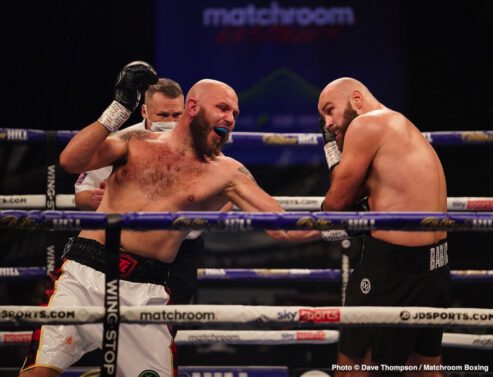 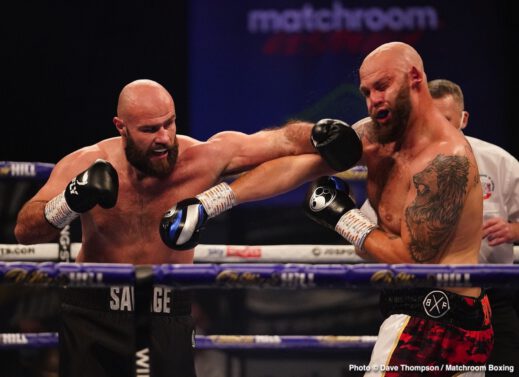 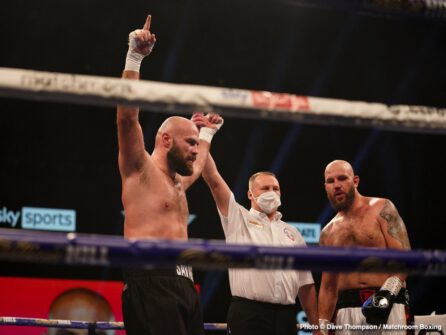 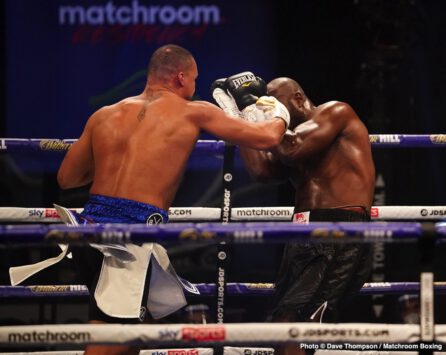 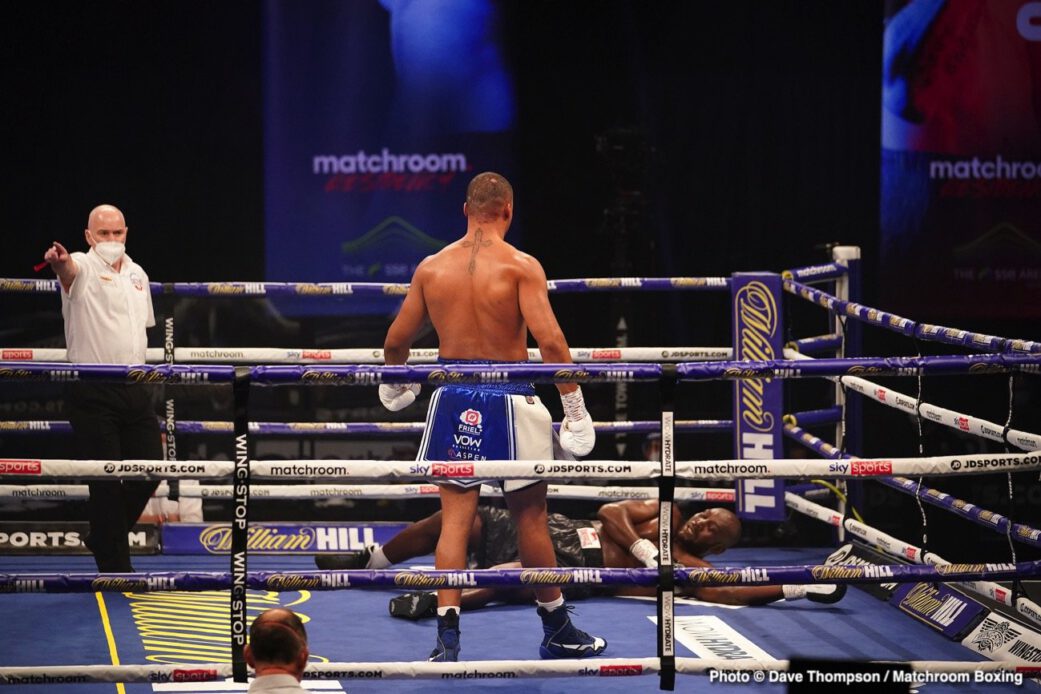 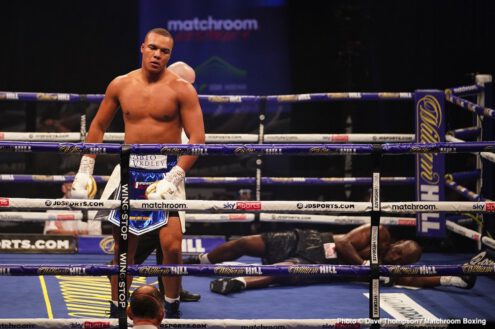 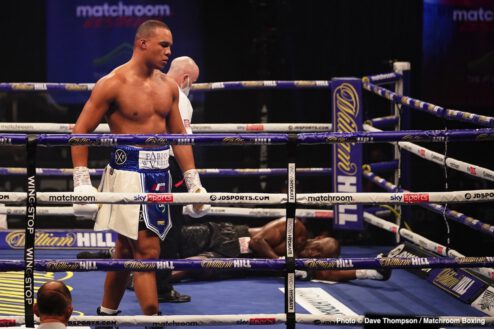 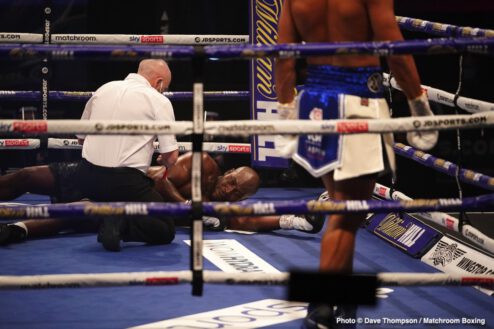 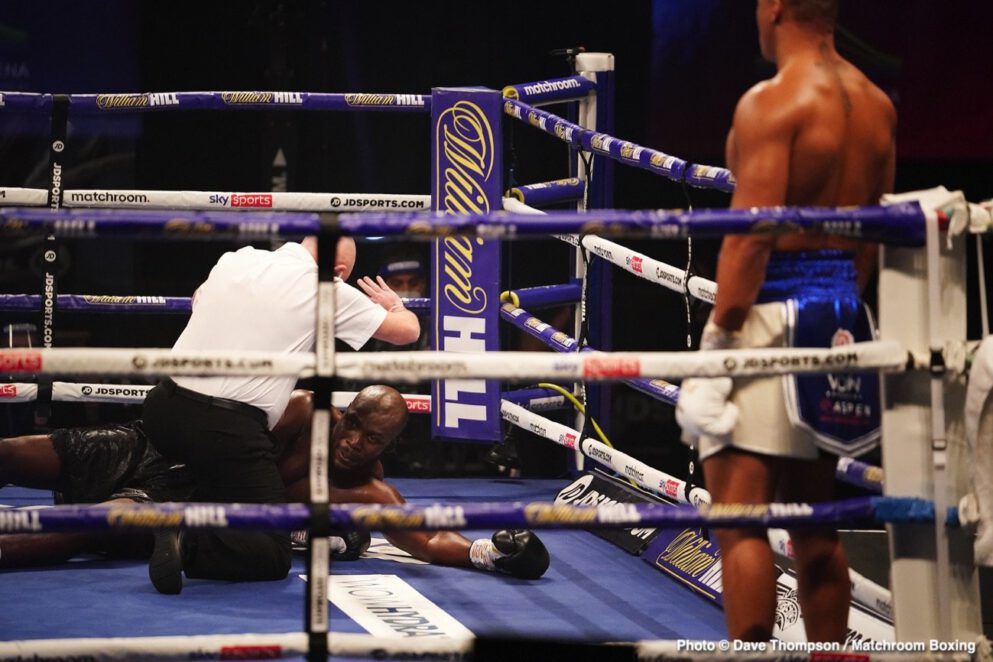 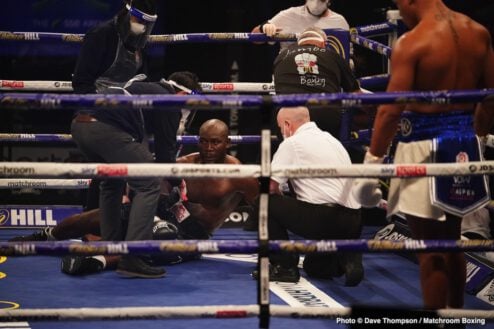 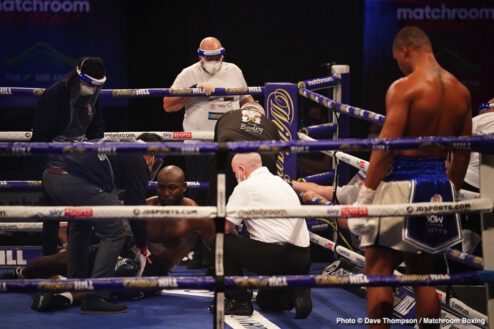 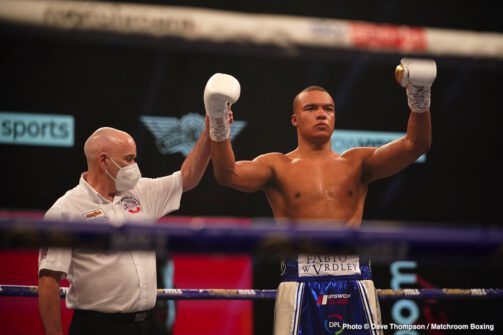 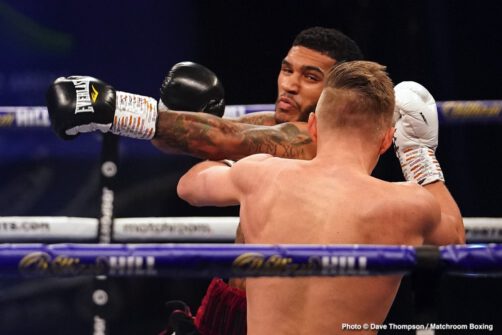 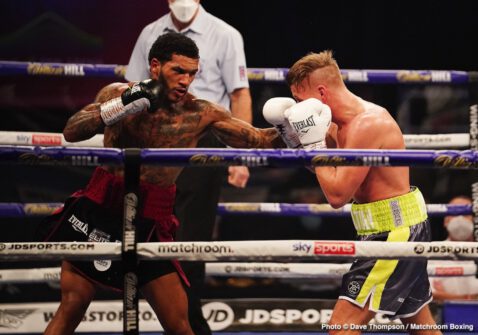 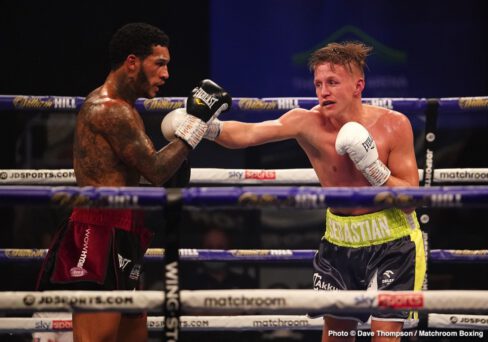 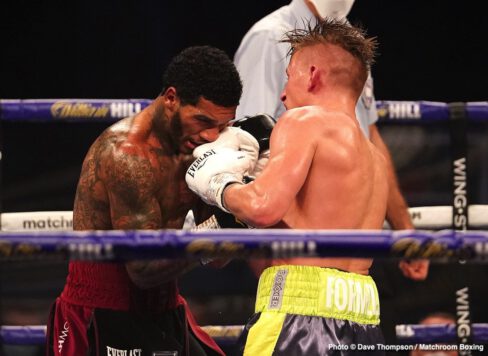 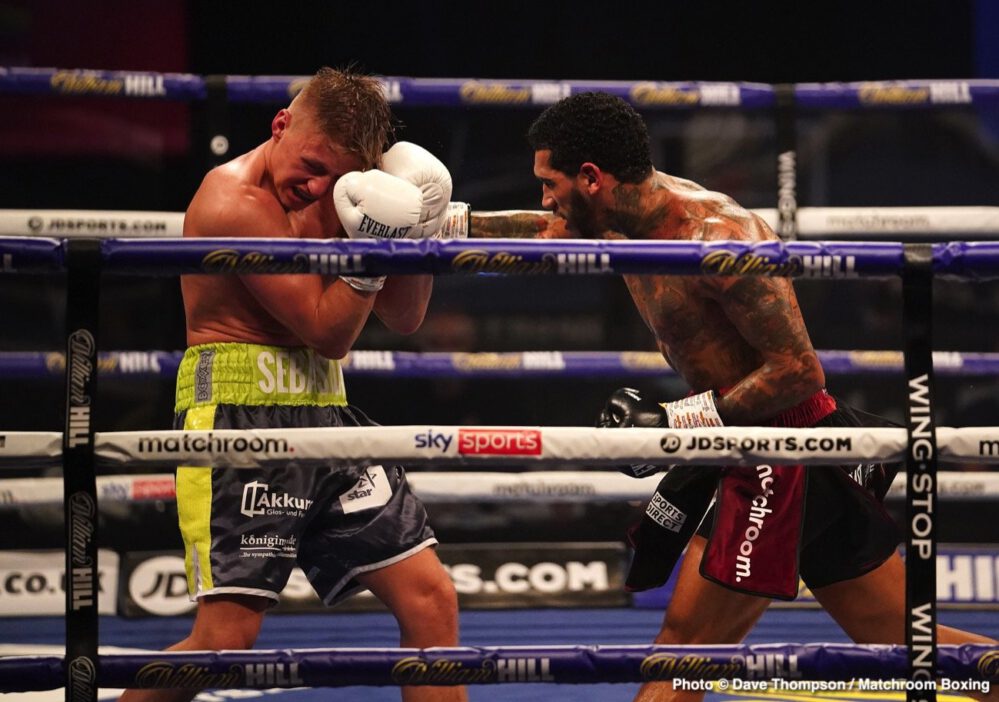 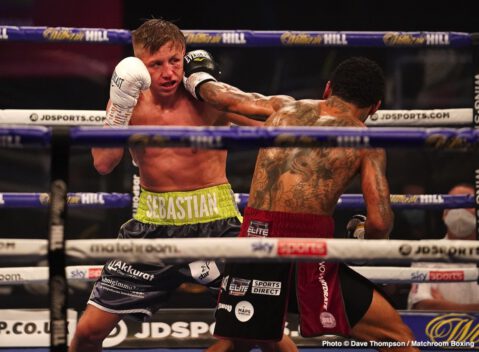 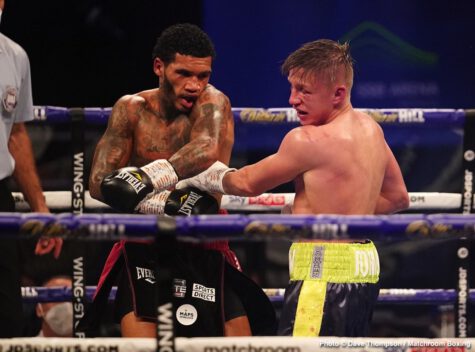 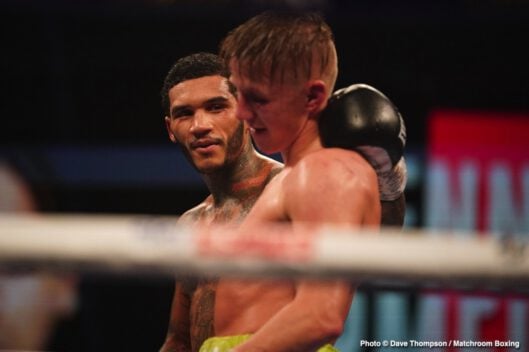