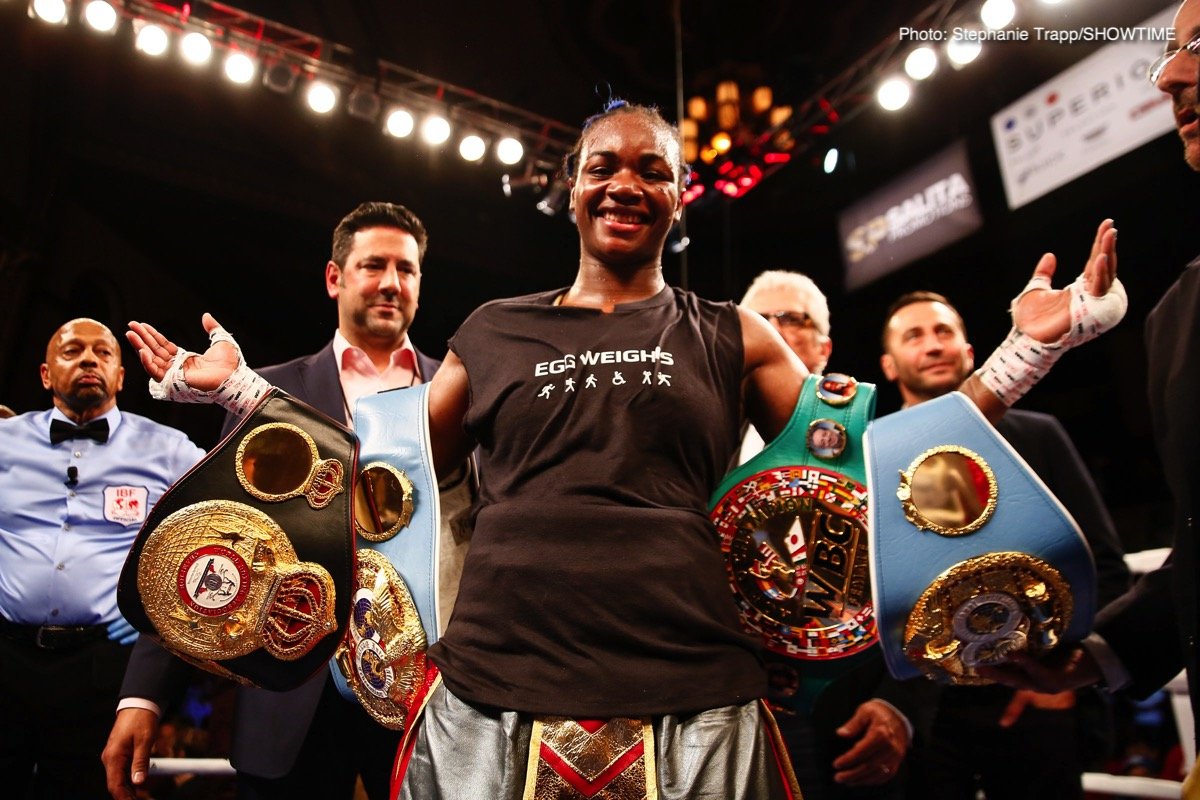 Women’s superstar and two-division world champion Claressa Shields is in Florida with trainer John David Jackson, finishing up preparations for her showdown with Glasgow, Scotland’s Hannahh Rankin on Saturday, November 17, at the Kansas Star Arena and Casino in Mulvane, Kansas.

Shields (6-0, 2 KOs) will defend her IBF and WBA World Middleweight Championships, and be looking to add the vacant WBC title, against Rankin (5-2, 1 KO) in the 10-round co-featured bout to Salita Promotions stablemate Jarrell Miller’s heavyweight showdown against Romania’s Bogdan Dinu.

23-year-old Shields, a former two-time Olympic Gold Medallist, has reignited interest in women’s boxing and become a ratings favorite for her nationally televised championship exploits. A proud native of Flint, Michigan, Shields mixes her brash pronouncements of greatness with a genuine and continued effort to inspire female athletes and render aid to members of her home community.

Shields was originally scheduled to face WBC and WBO World Middleweight Champion Christina Hammer on November 17, but the bout was postponed after Hammer withdrew due to medical reasons.

Did the change of opponents from Hammer to Rankin affect your training?

I don’t train for my opponents, I just push to get the best out of me, physically and mentally. If I’m the best ‘me,’ I don’t have to worry about who the opponent is. The change of opponents didn’t bother me at all; the worst thing about this camp for me was just all the date changes – constantly having to get my mind focused on the pace and timing of training depending on the fight date. I can’t wait to get in the ring!

You’ve fought at super middleweight 168 and recently at middleweight 160 pounds. How is your training, diet and any other efforts different to make 160?

Training is always hard and I’m constantly learning. I’ve had a completely different diet this camp – a real change and a positive one for me. I’ve teamed up with Perfecting Athletes for my daily meals, and I feel great. I’ve always tried to eat healthy but these folks are pros and are more educated in that field than myself. I have this magic drink that makes my stomach smile – I love it! It’s watermelon mixed with a green vegetable. I’m not going to tell you what vegetable it is, but I’ve been drinking it everyday, and I feel GREAT.

Your viewership numbers have been very strong. Why do you think people are drawn to you?

I believe that people are drawn to how real and honest I am, both in and out of the ring. I say what I mean and mean what I say. I’m hard but I have a soft side also. And I think people are drawn to how I fight — not only do I talk a good game but I fight my a– off too! I give 1000% every time – I want to change the game and bring a whole new generation of fans to women’s boxing and boxing overall.

What do you know about your opponent Hannah Rankin?

I know that my opponent Rankin is very tough and determined to be a world champion. I like her drive, I like her heart. I know that she has been in the ring as a sparring partner for many champions, one being Christina Hammer. So Rankin has seen some good fighters. But one thing is for sure – she has never seen a fighter like me. And since Hammer couldn’t fight because of her medical condition, in many ways the next best thing is to fight and beat her sparring partner and let Rankin tell Hammer what she’s in for when she returns!

What needs to be done to solve the Flint water crisis?
To solve the flint Water crisis, I think that people should continue to give water and also keep it in the news that there is a city in America where, unbelievably, US citizens don’t have clean water. And hopefully the president or our governor do something to fix all the pipes.

What’s the secret to becoming the best of the best in any sport?

I believe the secret starts with believing in yourself, being dedicated, working hard and just always striving to be better. I feel I’m my biggest critic when I train and box. It’s hard to watch film of my fights because even though I’m doing 97 things right I just can’t stand to see the 3 things I’m doing wrong. I’m a person who strives to pull out my full potential. It takes guts to be great. Nothing will stand in the way of achieving my goals, which includes being the GWOAT and creating equality for all women fighters when it comes to the money, opportunities and coverage the men get.

On Saturday, November 17, at the Kansas Star Arena and Casino in Mulvane, Kansas, superstar two-division women’s world champion Claressa Shields of Flint, Michigan, will defend her IBF and WBA World Middleweight Championships and be looking to add the vacant WBC title against Hannahh Rankin from Glasgow, Scotland.

Shields was originally scheduled to face WBC and WBO World Middleweight Champion Christina Hammer on November 17, but the bout was postponed after Hammer withdrew due to medical reasons. Hammer has been named a champion in recess during her recovery. The two champions are now projected to do battle in the first quarter of 2019.

“Claressa is a once-in-a-generation athlete that transcends the sport,” said her promoter, Dmitriy Salita. “She will take another step in her goal to achieve the status of GWOAT as she makes the first defense of her middleweight world titles against the skilled and durable Hannah Rankin.”

A bonafide women’s superstar and TV ratings favorite, 23-year-old “T-Rex” Shields is a two-time Olympic gold medallist and already a world champion in two weight divisions. In her fourth professional fight, she won the IBF and WBC Super Middleweight Championships in August 2017 with a dominant stoppage of Germany’s Nikki Adler. Then, in June of this year and in just her sixth pro fight, she dropped down to 160 pounds and won the IBF and WBA Middleweight titles with an exciting unanimous decision over Hannah Gabriels.

“I’m so excited to be able to give my fans another chance to see me defend my championship this year and to have the opportunity to win the WBC middleweight title on November 17,” said Shields. “I appreciate the efforts of Salita Promotions, my manager Mark Taffet, and Matchroom Boxing in putting this fight together so quickly. I will be in great shape and will provide a great performance.”

“I want to thank Salita Promotions and Matchroom Boxing for providing Claressa with another chance to fight this year and an opportunity to attain a third middleweight world championship,” said Mark Taffet, manager of Claressa Shields. “Claressa is hungry and motivated to put on a great performance on November 17 on DAZN. Claressa has lofty goals and I have no doubt that she’s going to achieve every one of them, including fighting and defeating Christina Hammer early next year. I expect Shields vs Rankin to be an action-packed fight that fans will enjoy tremendously.”

“I’m excited about the fight and proud to be representing Scotland on such a big stage,” said Rankin. “In boxing, nothing is impossible and on November 17, it will be just us in there when the bell rings and I think it’s going to be one hell of a fight.”