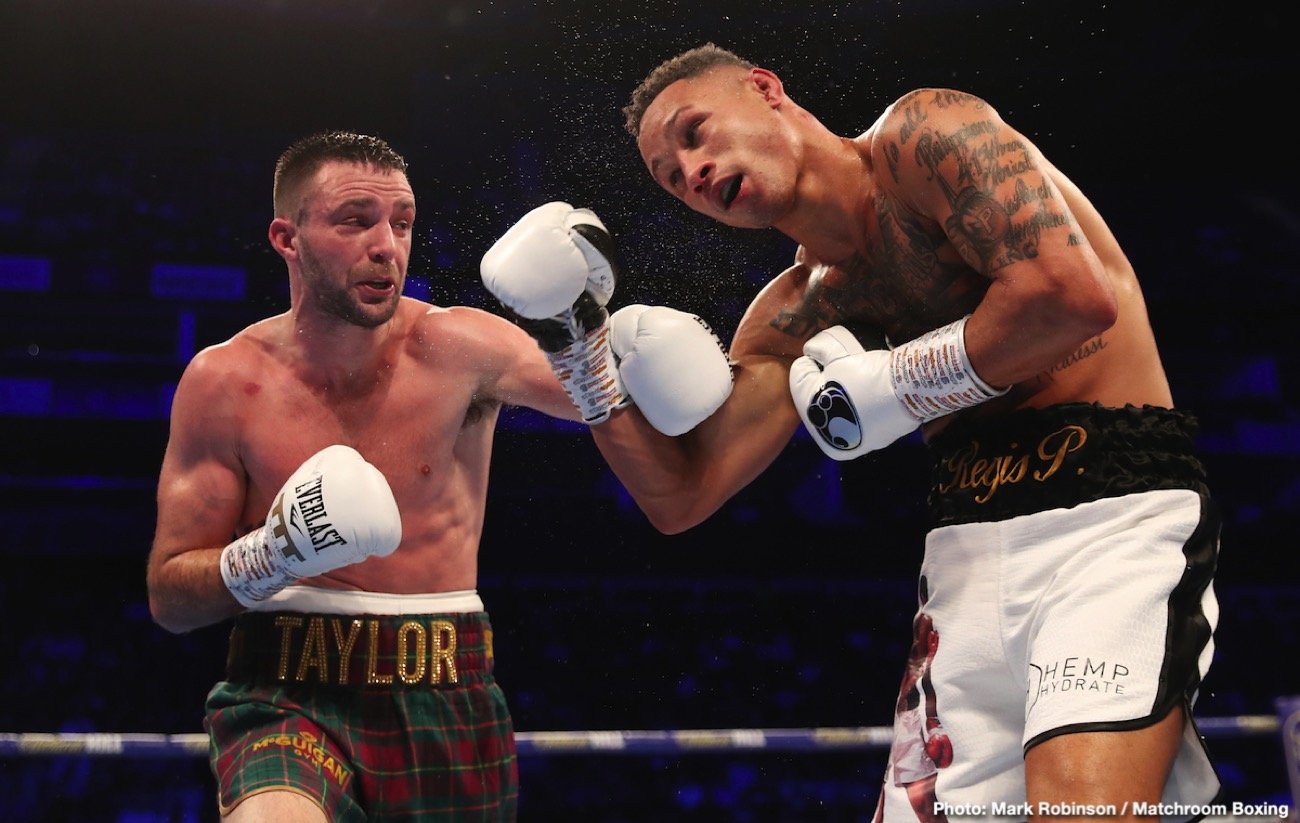 IBF 140-lb champion Josh Taylor (16-0, 12 KOs) went to war with WBA light welterweight champion Regis Prograis (24-1, 20 KOs) in beating him by a 12 round majority decision on Saturday night to win the World Boxing Super Series tournament at the O2 Arena in London, UK.

It was a back and forth fight in which both guys landed big shots. In the end, Taylor had banked too many of the early rounds for the 30-year-old Prograis to get the victory.

Prograis’ mistake in the fight was he was throwing too many single shots, and not enough combinations. He would throw a shot, and then admire his work to see what the reaction was from Taylor and the crowd. Prograis looked mechanical, and less fluid with shots than 2012 Olympian Taylor. One could tell from watching them that Taylor was the better schooled fight. Prograis did show a lot of talent, but nearly to the extent that Taylor exhibited.

“It was a close fight, the better man won tonight so it’s cool,” said Prograis. “I thought it was pretty even until the last three rounds, thank y’all England, I’ll be back. I enjoyed that, I’m sure he did too. Hopefully, we do a part two.”

Taylor, 28, says he wants to face WBC/WBO light welterweight champion Jose Ramirez next in a unification fight. However, making that fight is easier said than done. Ramirez’s promoters at Top Rank Boxing may not be eager to put the fight together with Taylor after tonight. It’s a bad match-up for Ramirez, and he’s popular in Southern California. If Ramirez loses his WBC/WBO titles, those fans might disappear.

Read:  30 Years Ago: When Michael Moorer And Bert Cooper Went To War

“What a fight, all respect to Regis, he’s a great champion and was very strong. I wish him a ll the best going on,” said Taylor. “I knew I could get to him. I don’t think he expected me to be able to switch it up so easily. Jose Ramirez, where you at? Let’s do it!”

Taylor beat Prograis by being the busier fighter, and staying in the pocket to batter him on the inside. There was no switching up by Taylor. He won by simply letting his hands go with powerful left hooks and uppercuts. Prograis spent far too much time jabbing, covering up and throwing single shots.

Heavyweight contender Dereck Chisora (32-9, 23 KO) beat fringe contender David Price (25-7, 20 KOs) by a 4th round knockout in a competitive fight in the co-feature bout. The fight was considered a mismatch going in, so it wasn’t a surprise that the 35-year-old Chisora stopped Price. The fight was stopped at 2:00 of round 4.

It was clear that the bout end badly for the 6’8″ Price, and that’ s exactly what happened. In the 4th round, Chisora caught Price with a hard shot to the side of his head that dropped him. Although the 36-year-old Price got back to his feet, his corner threw in the towel. It was a smart stoppage, because Chisora would have flattened Price right away if the fight had continued.

Price was hurt in the last seconds of round 3, and just barely made it out of the round. He didn’t recover in between rounds, and easy pickings for Chisora in the 4th.

Chisora smothered Price the entire contest by staying in close, and throwing short shots. There wasn’t a lot of clean punches landed by Chisora until late in the 3rd. Price was unable to keep him off, and that made it easy for Chisora to basically mug him. Chisora was hit by some big shots from Price in rounds 2 and 3, but there wasn’t enough of them to cause him any concern. Price had the better punching power, but he wasn’t busy enough for him to have a chance at winning.

“I came to seek and destroy,” said Chisora after the fight. “If I catch him, he’s gone. If we can get Joseph Parker as soon as possible, I’m ready to go. I hope he doesn’t get another spider bite.”

A better fight for Chisora would be to take on Oleksandr Usyk, as there would be more to gain for him from that fight. Usyk, 32, is the WBO mandatory challenger to WBO heavyweight champion Andy Ruiz Jr. If Chisora were to beat Usyk, he would be set to fight for a world title. In contrast, beating Parker won’t do nearly as much for Chisora.

Results from the O2 in London: