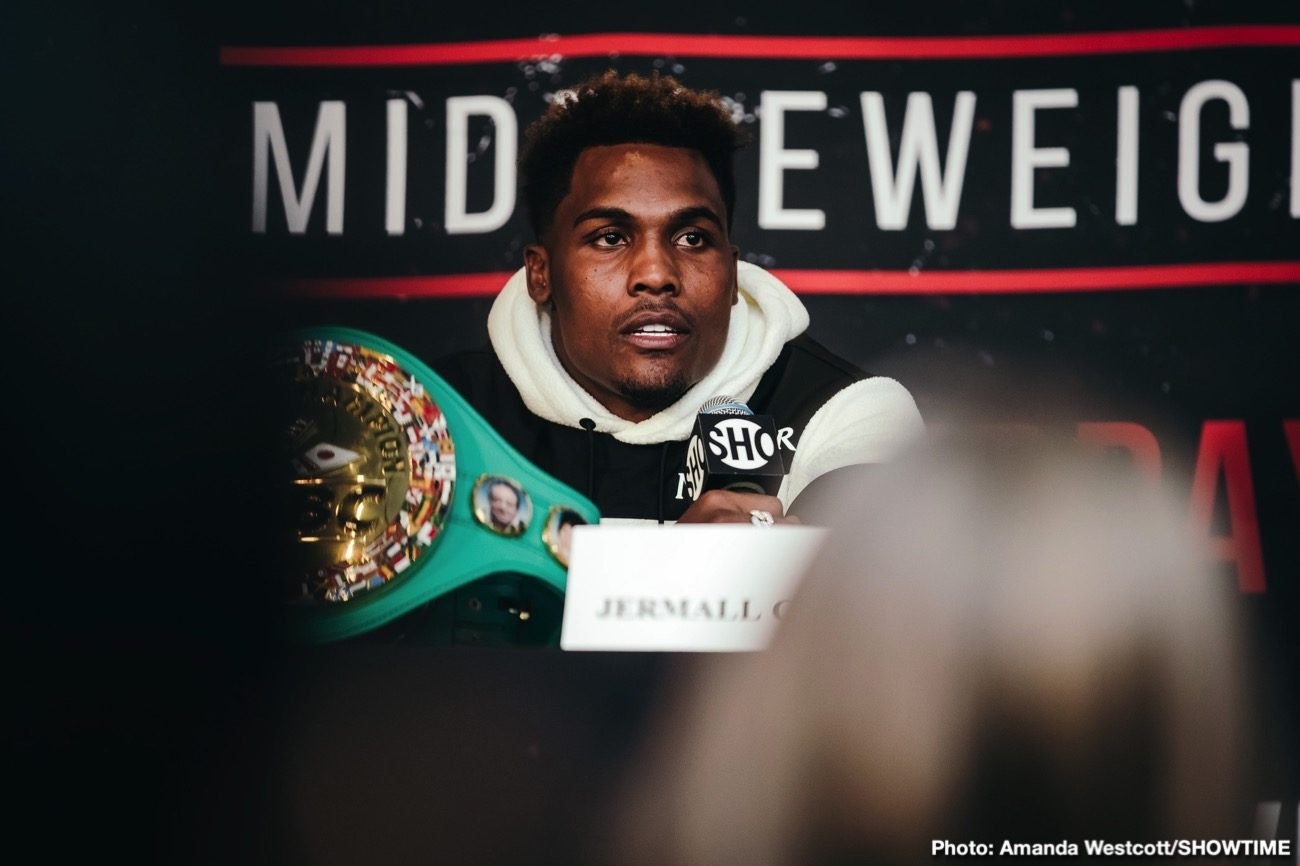 Jermall Charlo says he’s interested in signing some one-day contracts with DAZN to fight their top fighters Saul Canelo Alvarez, Gennady Golovkin and Demetrius Andrade. Charlo says for DAZN and Matchroom Boxing USA promoter Eddie Hearn to “Hit him up” with an offer.

Charlo is an 11-year pro, and his career is passing him by without him being involved in major fights. At this point, Charlo’s biggest fight of his career was his match against Julian ‘J-Rock’ Williams in 2016, and that wasn’t a big fight.

Charlo (29-0, 21 KOs) is defending his WBC middleweight title against Dennis Hogan (28-2-1, 7 KOs) on December 7 on Showtime Boxing at the Barclays Center in Brooklyn, New York. After that fight is out of the way, Charlo says he wants the big fights against Canelo Alvarez, Gennady Golovkin, Sergey Kovalev, Daniel Jacobs or one of the junior middleweight champions.

“Everybody keeps talking to me about the Canelo and Golovkin fight,” said Charlo to Fighthype. “The only way it can happen is if I give me a one-day contract or some s—. I don’t know. I’m not a match-maker or manager and I don’t pick fights. If I can get a chance to fight one of those guys, the world will enjoy it,” said Charlo.

“All my fights are legacy fights,” said Charlo. “I hope you don’t think I’m sleeping on this dude [Dennis Hogan]. I’ve been preparing for him. Long before Canelo got his fight lined up [against Kovalev], we already knew about him. We got it done, and we’re going to make it happen on December 7th.

“I got the belt [WBC], and I want to unify. And I want to fight another champion, because they’re not going to give me the credit that I deserve if I keep fighting guys like this. Not a lot of…People know him [Hogan], because he fought the Jaime [Munguia] guy, and if they thought he won the fight, then that gives him love. If I beat his a–, then what does that tell you about Jaime?” said Charlo.

With Charlo talking about signing one-day contracts with DAZN to fight their top fighter, he sounds needy and more than a little desperate. However, Charlo’s fantasy of signing one-day contracts to fight the biggest stars signed with DAZN is dream stuff, because it’s not going to happen. Unless Charlo signs with DAZN with a normal contract, he probably won’t get a chance to fight GGG, Canelo, Jaime Munguia, Demetrius Andrade or Daniel Jacobs. That’s just a short list of guys that Charlo won’t be able to fight.

“If Canelo lose, then I got to go after the major fights at the moment,” said Charlo. “That’s a big maybe. I don’t know what’s going to happen. I can’t just guess. Yeah, that’s my big goal to get one of those fights that I keep telling you about. The fight that I want to get will for sure be on PPV. My ultimate goal is to just fight, and be more active.

‘I actually want to have three fights in 2020. These slow paced fights aren’t really working, because it’s giving these fighters out there leverage. They feel like Charlo isn’t fighting. It’s not me. I don’t make my fights. I’m in control of my promotion, but I’m not in control over the opponents that step up,” said Charlo.

It’s good that Charlo is looking to fight 3 times in 2020, but it won’t help him unless he fights good opposition. In Charlo’s last seven fights, he’s fought these guys:

In 2020, it’s likely that Charlo will fight these types of opponents:

These are all fighters that are ranked in the top 15 with the World Boxing Council.

“Hell yeah, said Charlo when asked if he’s interested in fighting Demetrius Andrade. “He’s a southpaw, and he’s as chinny as hell. It seems like there’s a lot of guys over there that got some s— going on, but we’re going to show you what the real business is. Hit me up. I’m my own boss,” said Charlo when asked if he’ll sign a bunch of one-day contracts to fight DAZN fighters. “Everyone wants me to go to DAZN. Why doesn’t DAZN bring one of their fighters over to Showtime where we’re normally at?

“Brooklyn, boxing, Barclays, Jacobs, think about it. There’s nothing more to talk about. There’s no science to the s—. If there’s a champion down at 154 that wants some Jermall Charlo, I’m going to give it to them. I want to fight a champion, unify only. That’s what I want. Who else has got the belts at 154?

“You know who the champions are. I’m a former junior middleweight champion. I will [move down]. I’d hire a specialist and make it happen,” Charlo said when asked if he would move down to 154 to challenge one of the champions. You got to, right?” said Charlo.

Charlo might be interested in fighting WBO middleweight champion Demetrius Andrade, but that doesn’t mean it’s going to happen. Andrade is signed with Matchroom Boxing promoter Eddie Hearn, and he’s not going to let him fight a guy from another network, especially if there’s a chance that he’ll lose.

“GGG is a legend, and an awesome fighter. I’d love to share the ring with GGG also,” said Charlo. “I’m ready. I’ll fight Kovalev. I’m one of the best in boxing. I’m going to show you. I’m tired of talking about it. He made a better business move,” said Charlo about Canelo moving up to light heavyweight to take on WBO 175-lb champion Kovalev for his title. “Kovalev doesn’t have too many fights left. Jermall Charlo does. Obviously, there’s some politics going on. I’m just going to take a one-day contract with DAZN, and then just cancel that s—.

“Of course, I want to fight Canelo, and of course I want to fight Golovkin. And of course I want Jacobs. He’s a top fighter. He lost to both of them. ‘Ah, you got Canelo’s leftovers.’ Give me Canelo then or give me Golovkin or another champion, then you can tell me whatever you want to tell me after. He ain’t said he wants to fight me. Don’t do that,” said Charlo about Jarrett Hurd. “Don’t put words in his mouth. He never said he wants to go to 160 and fight me. I’ll entertain it, but like I said, I’m a champion at 160. They’ve got to face the champ. I’ll fight the champion at 168. Whoever,” said Charlo.

It’s better for Charlo to aim low when it comes to his fights in 2020. He needs to be realistic by naming guys that his manager Al Haymon can actually get for him.