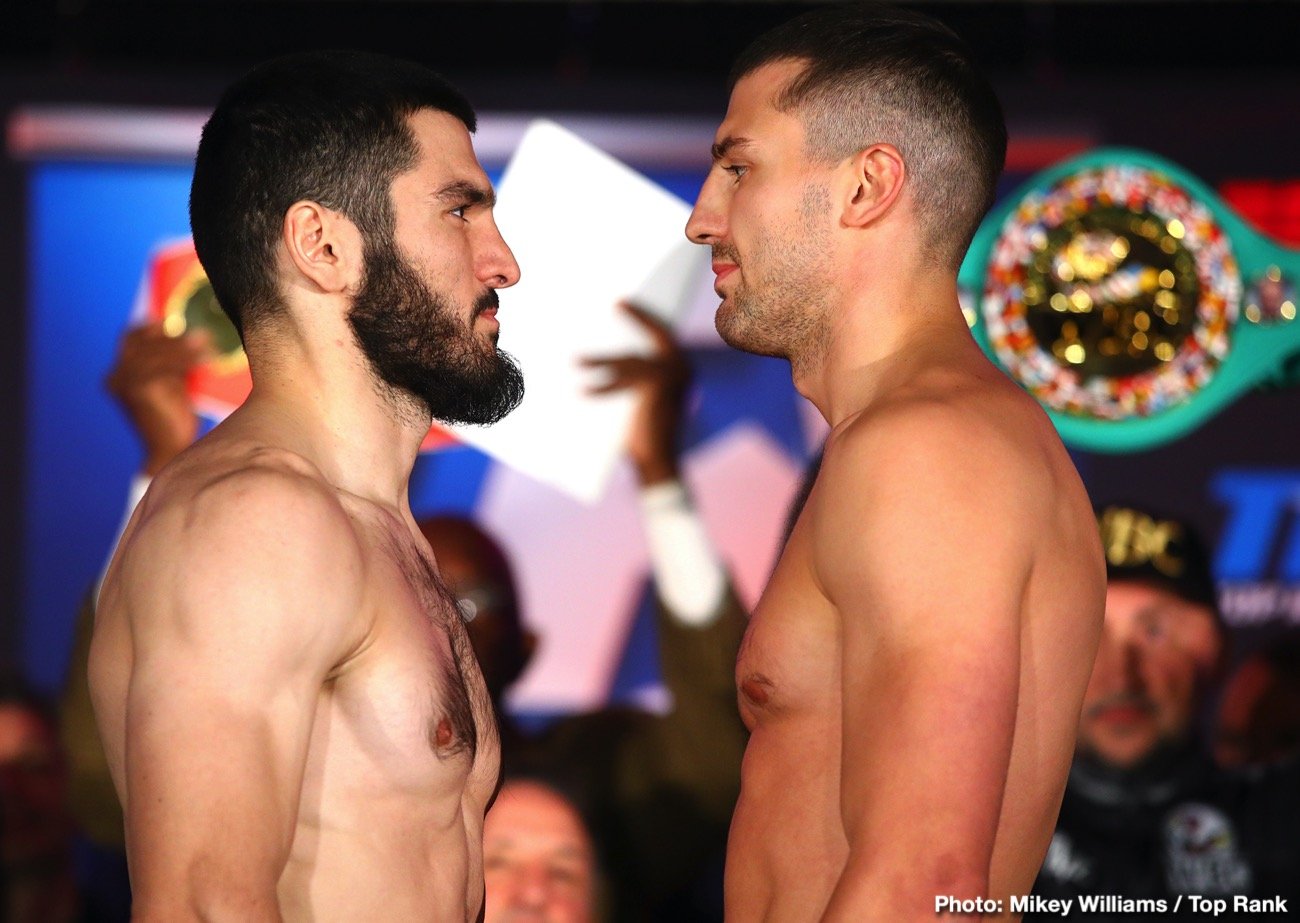 This Friday night live on ESPN, Artur Beterbiev and Oleksandr Gvozdyk take part in an important unification bout at the light heavyweight division. Russia versus Ukraine is a natural rivalry in amateur boxing and most recently growing in the pros, and unfortunately outside of the ring as well. Both fighters are unbeaten and considered to be among the creme de la creme at 175. American hardcores can only hope this rivalry grows. On that note we might as well throw in Uzbekistan with a bunch of talent coming over to the states.

These two actually met ten years ago back in the amateur days. Gvozdyk claims to have entered their meeting with a broken nose, which led to Beterbiev securing the victory via bloody nose in the second round. A decade later Artur no longer has the experience advantage to fall back on nor will he be facing a then underdeveloped product in Gvozdyk. Beterbiev is the brute force having scored 14 knockouts in 14 fights as a professional. Gvozdyk has power and is a step up in the skill department capable of using a plan B that doesn’t include mixing it up on the inside.

Early in Beterbiev’s career he was moved rapidly and answering the bell in the form of brutal knockouts. Although past their primes respectably, on national television veteran guys like Tavouris Cloud and Gabriel Campillo were sliced and diced. Everything was looking up for Artur until one of the many problems in the boxing world reared its ugly head this time it being promotional issues. In a nutshell Beterbiev’s career had been a case of hurry up and wait now separated from his promoter and manager, an opportunity of a lifetime to unify the 175-pound division on ESPN.

The punching power is as real as its gets from Beterbiev and although the Russian native has an in-depth amateur pedigree, at the paid ranks it’s a different story. Beterbiev doesn’t have a great jab and ignores a jab all together way too often. Once inside he’s a punishing body puncher and can throw fluid combinations, especially if he’s got a man in front of him or trapped near the ropes.

Beterbiev doesn’t carelessly waste punches offensively but he does struggle defensively. In a high level matchup power can definitely play a part, obviously at times a major role in some instances. This podcaster is far from a historian, but historically speaking boxers who lack in the defense category don’t fare well matched on the higher levels. Beterbiev will need to turn this contest into a rough and tumble affair with piercing body blows, with a few straying low or on thrown on the hip just for good measure.

Similarly to his opponent in the ring on Friday night, Oleksandr Gvozdyk’s experience in the un-paid ranks is sizable. It appears on paper and on tape thus far, Gvozdyk’s the more skillful boxer and he will have to employ every trick up his sleeve to manage Beterbiev’s advances.

Oleksandr’s jab is fairly active an added bonus because he throws it in variation to the head or body. Gvozdyk is very patient while searching to find opportunities to land deadly right hands and left hooks. Gvozdyk’s punch output will have to go up to keep the mauling Beterbiev off of him. Naturally his workrate will rise based off of style unlike the Adonis Stevenson fight.

Gvozdyk’s footwork will be tested throughout this fight, and Artur won’t linger on the outside or look to throw deadly left hands one at a time like Adonis Stevenson. Of course that could play in to Gvozdyk’s hand with his ability to time his punches. Can Gvozdyk be on the move for what may be the vast majority of 12 rounds?

Gvozdyk needs to stay off the ropes and out of corners were Beterbiev is a monster. Beterbiev will need to use an effective jab instead of just bulldozing inside. Gvozdyk’s possess lateral movement and can pivot off the jab using angles when taking half or full step out of danger. Oleksandr is the craftier of the two fighters equating to winning more rounds. The only question remains will Gvozdyk utilize two inches of reach and be able to stay out of danger? If so he will win by catching Beterbiev flush on his way bullishly in the trenches.

My Official Prediction is Oleksandr Gvozdyk by Unanimous Decision.

Written by Chris Carlson Host/Producer of The Rope A Dope Radio Podcast Available at www.blogtalkradio.com/ ropeadoperadio & Follow on Twitter RopeADopeRadio