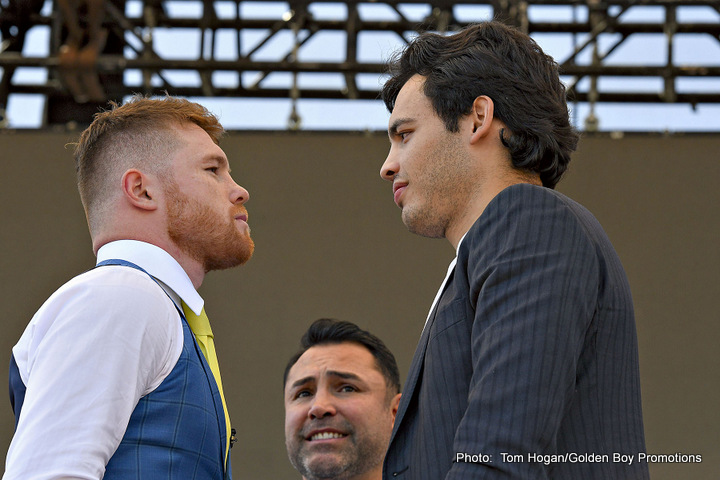 Flipps Media has announced that it will stream the May 6th super fight between Saul “Canelo” Alvarez and Julio Cesar “JC” Chavez, Jr., live on pay per view in the United States and Canada, starting at 9 p.m. ET / 6 p.m. PT, from sold-out T-Mobile Arena in Las Vegas, Nevada.

“Canelo vs. Chavez, Jr.”, promoted by Golden Boy Promotions, is available to watch in HD in English and Spanish on the Canelo-Chavez.com website for a suggested retail price of $69.99.

Boxing fans can watch the entire PPV card, headlined by the Alvarez-Chavez, Jr. 12-round fight being contested at a catch-weight of 164 ½ pounds, live at www.canelo-chavez.com from any computer or mobile device. All supporting events including the Canelo vs. Chavez Jr. press conference, weigh-in, and undercard fights will be streamed live globally free on the Canelo-Chavez.com website, the FITE.tv web site and on the FITE app available for iOS and Android devices.

“We’re thrilled to host the biggest boxing event of the year, Canelo vs. Chavez Jr.,” said Flipps Media Co-founder and CEO, Kosta Jordanov. “With this amazing PPV card, the English and Spanish HD feeds, and top boxing experts in the live chat, this will be an amazing night for all fans!”

The “Canelo vs. Chavez, Jr.” PPV card is loaded with exciting knockout artists, with eight of the main card fighters having a combined record of 272-18-2 with 194 knockouts, highlighted by the Alvarez-Chavez, Jr. cumulative record of 98-3-2 with 66 stoppages.

Alvarez vs. Chavez, Jr. is one of the most anticipated fights, easily a Fight of the Year candidate, featuring two of the highest-profile Mexican warriors, fighting on Cinco de Mayo weekend.

Twenty-six year-old Alvarez (40-1-1, 34 KOs) is the reigning World Boxing Organization (WBO) world junior middleweight and The Ring magazine middleweight champion. The wildly popular fighter is moving up in weight to fight Chavez, Jr., who has dropped back down from light heavyweight.

In his first pro loss, Chavez Jr. lost a 12-round decision to Sergio Gabriel Martinez, who survived a final round knockdown as Chavez tried to finish off the famed Argentinian.

The 10-round co-feature also has explosive potential as middleweights David Lemieux (37-3, 33 KOs) and Marcos “Dorado” Reyes (35-4, 26 KOs) have a higher combined knockout percentage than Alvarez-Chavez. Jr.

Lemieux, 28, is a highly skilledfighter from Montreal and a former International Boxing Federation (IBF) middleweight world champion. He is 12-1 in his last 13 fights, since his loss to unified world middleweight champion Gennady “GGG” Golovkin.

At stake for Lemieux is a possible throw-down with “Canelo” later this year. The Canadian slugger has quality victories over Curtis Stevens, Hassan N’Dam N’Jikam, Gabe Rosado, Fernando Guerrero. Lemieux is currently world rated among the top seven middleweights by all four major sanctioning bodies – WBO & WBC #4, WBA #5 and IBF #7 — as well as No. 3 by (independent) The Ring.

Reyes, fighting out of Chihuahua, Mexico, went thedistance in 2015 with Chavez, Jr., in a loss by way of 10-round unanimous decision. Reyes is a former WBC FECOMBOX middleweight and Mexican light middleweight champion.

Taylor was a decorated American amateur boxer who owned a 186-26 amateur record, including three gold-medal performances in the National PAL Championships. The 26-year-old has never been stopped as a professional, taking world champions Adrian Broner and Chris Algieri the distance. Taylor has defeated Karim Mayfield, Victor Manuel Cayo and Raymond Serrano, among the more notables.

Avila, rated No. 10 by the WBC, is a live underdog having defeated 28-6 Jose Ramirez, 24-7 Prosper Ankrah and 23-6 Rene Alvarado in his last three fights.

The event is available for pre-order now at www.Canelo-Chavez.com

HBO Sports is the Fight Fan’s Destination for Canelo vs. Chavez, Jr.

HBO Sports is the fight fan’s destination for Canelo Alvarez vs. Julio Cesar Chavez, Jr. fight week news and information, providing viewers with an in-depth look across television, digital and social platforms at the blockbuster event set for Saturday, May 6 at the T-Mobile Arena in Las Vegas. The mega-event will be produced and distributed live by HBO Pay-Per-View® beginning at 9:00 p.m. ET/6:00 p.m. PT.

Fans will have access to original programming, specials, updates from HBO Boxing Insiders and exclusive videos leading up to fight night. There will also be behind-the-scenes photos, videos, live streams and other customized content available.

· CompuBox: A statistical breakdown of Canelo vs. Chavez, Jr.: www.InsideHBOBoxing.com

*Events and times subject to change*

Boxing fans can also view Canelo vs. Cotto 2015 and Chavez, Jr. vs. Lee 2012. These classic fights are available on HBO On Demand, HBO GO, HBO NOW, HBO.com and YouTube.com/HBOBoxing as well as affiliate portals.

Canelo vs. Chavez, Jr. takes place Saturday, May 6 from the T-Mobile Arena in Las Vegas and will be produced and distributed live by HBO Pay-Per-View beginning at 9:00 p.m. ET/ 6:00 p.m. PT.

“Mano-A-Mano: The Battle for Mexico” to air on ESPN 2 and ESPN Deportes This Week

“Mano-A-Mano: The Battle for Mexico” to air on ESPN 2 and ESPN Deportes This Week Featuring Canelo Alvarez and Julio Cesar Chavez, Jr.

LOS ANGELES (May 1, 2017) – The Golden Boy Media and Entertainment production of “Mano-A-Mano: The Battle for Mexico” will air this week on ESPN 2 and ESPN Deportes as part of the lead up to the Canelo vs. Chavez, Jr.

“We are very excited to further our partnership with ESPN by having Mano-A-Mano air across the ESPN family of networks as part of the lead up to the Canelo vs. Chavez, Jr. mega fight on Saturday, May 6. We’ve had a successful start to the Golden Boy Boxing on ESPN series, and this is just the next step in what we hope to be a long partnership with ESPN” said Oscar De La Hoya, executive producer of “Mano-A-Mano” and chairman and CEO of Golden Boy Promotions.

“Mano-A-Mano” goes behind the scenes of the Canelo vs. Chavez, Jr. megafight as Golden Boy Media and Entertainment takes you into the camps of Canelo Alvarez (48-1-1, 34 KOs) and Julio Cesar Chavez, Jr. (50-2-1, 32 KOs) as they prepare for their Saturday, May 6 showdown. “Mano-A-Mano” also features exclusive interviews with Canelo, Chavez, Jr., Oscar De La Hoya, Julio Cesar Chavez, Sr., Eddy and Chepo Reynoso, as well as others from around the fighters’ fight camps and promotion.

“Golden Boy Media and Entertainment has established itself as a leader in boxing television production for live, scripted, and documentary programming,” said Golden Boy Media and Entertainment Executive Vice President David Tetreault. “Golden Boy’s new partnership with ESPN creates the foundation for new and exciting programming that boxing fans will truly appreciate as they gear up during Canelo-Chavez, Jr. fight week.”

CANELO VS. CHAVEZ, JR. – Live in Movie Theaters on Sat., May 6 – Attendees to Receive an Exclusive Fight Poster

On Saturday, May 6, fight fans watching the Canelo vs. Chavez, Jr. superfight on the big screen will also each receive an exclusive commemorative fight poster with the purchase of a ticket (while supplies last). The Canelo vs. Chavez, Jr. poster, issued by Fathom Events, features both fighters against a Mexican flag backdrop ready to meet in the ring to settle their boxing feud once and for all.

Tickets for the “Canelo Alvarez vs. Julio Cesar Chavez, Jr.” cinema event are on sale now at www.FathomEvents.com or at participating theater box offices. Fans throughout the U.S. will be able to enjoy the event in more than 250 select movie theaters through Fathom’s Digital Broadcast Network (DBN).

Photos and videos are available for download by clicking here or copying and pasting the link www.bit.ly/Canelo-ChavezJr into a browser. Credit must be given to Golden Boy Promotions for photos and videos used.

Canelo vs. Chavez, Jr. is a 12-round fight presented by Golden Boy Promotions. The event will take place on Saturday, May 6 at T-Mobile Arena and will be produced and distributed live by HBO Pay-Per-View® beginning at 9:00 p.m. ET/6:00 p.m. PT.