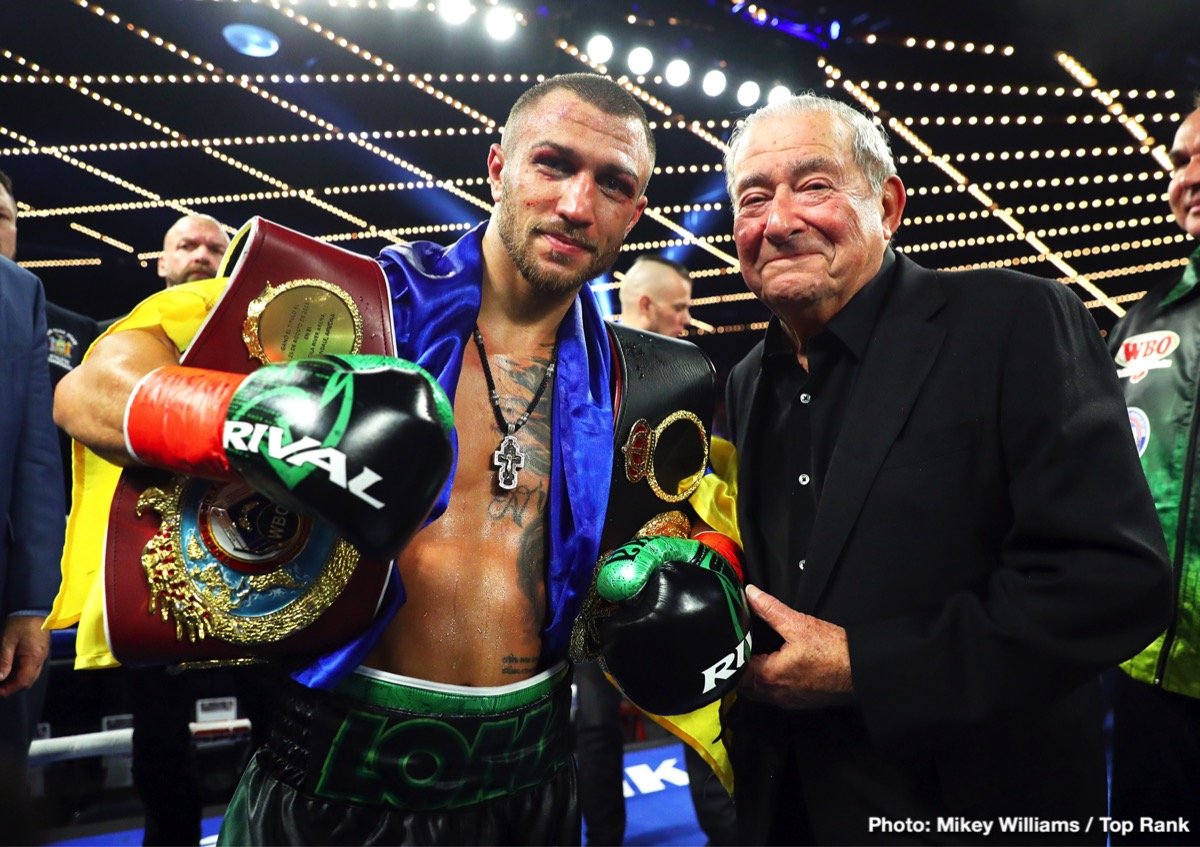 Arum and Haney’s promoter Eddie Hearn are in competition with one another to try and get the fight Kambosos for their fighters, and it’s anyone’s guess at this point which of the two will get the fight.

The Matchroom Boxing boss Hearn’s main selling point for Haney (27-0, 15 KOs) being the one to face Kambosos (20-0, 10 KOs) is that the winner would finally settle whole the undisputed champion is once and for all.

Kambosos is already the undisputed champion

This whole argument is obscured by the fact that the World Boxing Council president Mauricio Sulaiman has already named Kambosos as the undisputed champion.

Kambosos’ win over Teofimo Lopez, the man that beat the man [Lomachenko], gives him a cache to be called the undisputed lightweight champion without the need of facing Haney.

The WBC may not have been trying to devalue their regular lightweight champion when they created the Franchise title several years ago, but that’s what the end result is.

The Franchise title is the prestigious one. The regular WBC belt is the lesser belt, making Haney the paper champion or email champ, whichever monicker you want to give him.

Lomachenko is in a good position

“We’re talking to Lou [DiBella] and Peter [Kahn], and we’re optimistic because we have really good contacts inside Australia,” Arum said to Fighthype about his negotiations for a fight between Lomachenko and Kambosos Jr. for April.

“COVID is in the way, but I think it’ll be okay, and ESPN is ready to step up to the plate to get that fight done,” said Arum.

It’s going to come down to Top Rank/ESPN offering Kambosos the more extensive money offer for them to get the fight for the two-time Olympic gold medalist Lomachenko (16-2, 11 KOs).

If Hearn comes up with more money for Kambosos, Haney will be the one that faces the unbeaten Australian next April in a stadium, right. Yeah, Lomachenko vs. Kambosos would likely sell better in Australia than the young 23-year-old Haney fighting George, but it won’t matter.

Kambosos and his promoter Lou DiBella are expected to take the most prominent money offer they get, be it from Lomachenko or Haney. Ryan Garcia and Gervonta ‘Tank’ Davis have elected not to enter the competition. Those two are viewed as the only fighters in play for Kambosos’ next fight in April.

Arum says Haney is a no-name in Australia

“Truth be told, nobody knows who Devin Haney is in Australia,” said Arum in making it clear that Hearn’s fighter isn’t well known in Australia.

“Really, he hasn’t had any exposure. Everybody that follows boxing around the world, including Australia, knows Lomachenko.

“So, Lomachenko would be a much bigger match in Australia than Devin Haney would be.”

Read:  85 Years Ago: When The Great Joe Louis Stopped Jimmy Braddock To Begin His Long Reign As Heavyweight King

Kambosos will receive more attention and respect from the boxing world if he’s brave enough to take on Lomachenko, as the Ukrainian fighter is viewed as the #1 guy in the lightweight division.

It doesn’t matter that Lomachenko lost to Teofimo Lopez in 2020. He’s still viewed as the #1 fighter at 135, and he would be favored against Teofimo if the New Yorker didn’t quit the division following his recent loss to Kambosos.

Haney’s problem is that he’s looked dreadful in his last two fights, getting hurt against faded veterans Joseph ‘Jojo’ Diaz Jr. and Jorge Linares. Those two fights showed that Haney wouldn’t hold onto his WBC title for long, even with the careful match-making that’s being done for him.