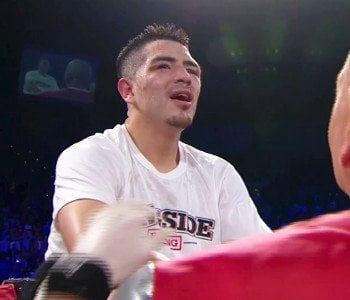 Yet promoter Arum has seemingly said the decision is now up to Rios himself and that an opportunity exists to fight a fortnight later on the 26th – on his own Top Rank PPV show.

He said via fighthype;

“It’s his choice. He can fight Kell Brook in England on September 12th, or he can wait until September 26th and fight someone else on our pay-per-view show.”

With immediate speculation as to the potential opponent for that date being the all-action Siberian Rocky, Ruslan Provodnikov – in what would surely be an all-out brawl – Arum kept his options open;

“I don’t know if he’d (Rios) wanna fight Provodnikov right away – but certainly down the road there’s Provodnikov.”

It’s not great news for Brook and his promoter Eddie Hearn who seem to be intent on that fight for Hearn’s own bumper PPV on the Sep 12th date – a PPV that he hopes will replicate the success of the recent triple header that saw Brook, Lee Selby and Kevin Mitchell in respective world title fights.

It was the belief of both Brook and Matchroom sport that he was a ‘live’ name in the Mayweather sweepstakes, yet they appear to have now put that idea aside in favour of Rios.

“We would love to make the Mayweather fight on Sep 12th and we are in the hat because Kell’s world champion and if Mayweather want’s to become undisputed champion with all the belts he has to take that fight.”

Displaying refreshing honesty, yet seemingly hanging his own hat on Rios, he said;

“I don’t think we’ll get it and other’s have been mentioned. (Berto & Mayfield) Kell Brook is more credible than the names mentioned and like I said, Mayweather has a chance at unifying the division – but I don’t think it will happen.”

“We are going for Kell’s next defence to be at the O2 Arena on another huge show there – and it’s looking like it will be against Brandon Rios.”

Or not – as the case may be. Maybe Eddie Hearn needs to get back on the phone and give Arum a call because there are too many conflicting reports and inconsistencies to know really what to trust.

I’d still bet on it happening but it’s pretty clear to me. NOTHING is a done deal yet.