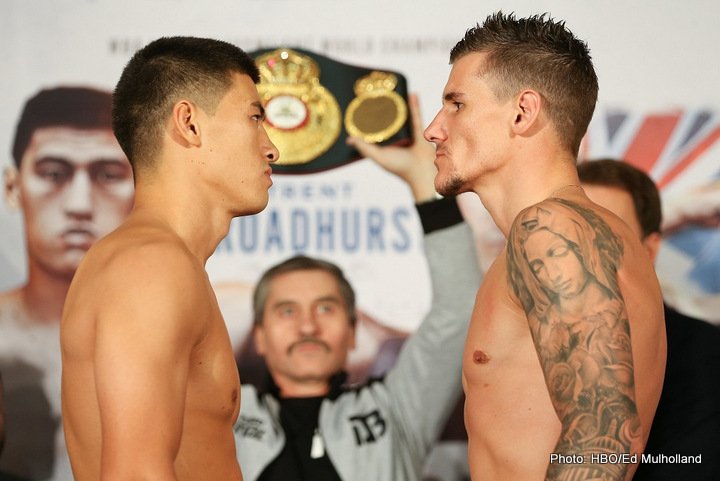 Saturday’s HBO Boxing After Dark® telecast begins live at 5:45 p.m. ET/PT from the Salle Medecin Monte Carlo, coupled with a primetime evening replay at 9:45 p.m. (ET/PT). Undefeated Dmitry Bivol will defend his title against Trent Broadhurst in a 12-round light heavyweight bout.

WBA Light Heavyweight World Champion Dmitry Bivol (11-0, 9 KOs) is slated to defend his title against Trent Broadhurst (20-1, 12 KOs) on Saturday in Salle Medecin, Monte Carlo and live on HBO Boxing After Dark® at 5:45 p.m. (live ET/tape-delayed PT). Bivol was elevated from Interim Champion to Regular Champion by the WBA after former WBA Super World Champion Andre Ward retired and former WBA Regular Champion Badou Jack vacated. This will be Bivol’s first voluntary defense of the belt and his fourth fight this year. He became the interim champion when he dethroned Felix Valera, and handed the Dominican boxer his only defeat, in May 2016. 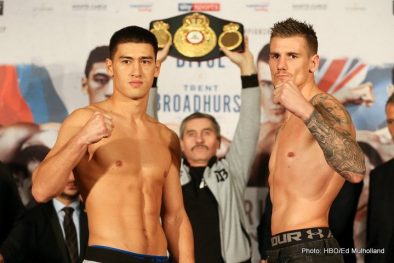 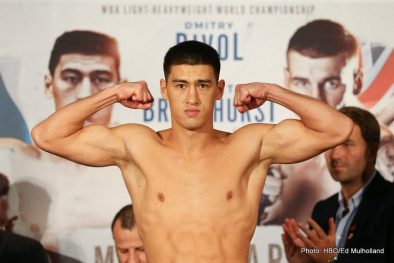 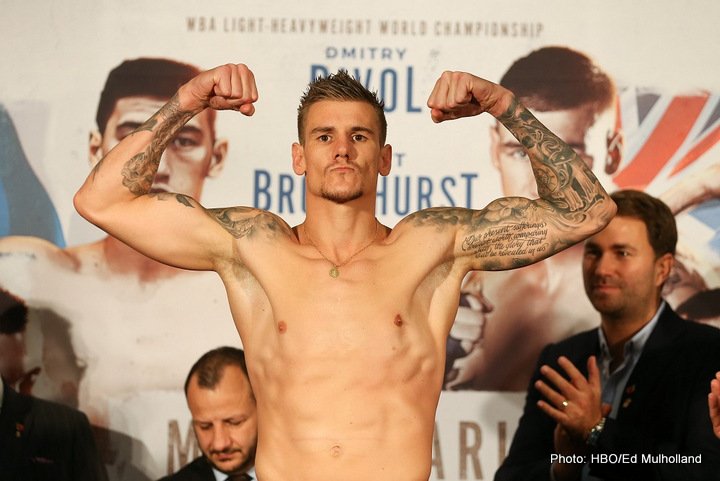 Despite his stellar record and meteoric rise, with only two professional fights on US soil, most American fans know very little about the 26-year-old light heavyweight from St. Petersburg, Russia. He was born in Tokmak, Kyrgyzstan but moved to St. Petersburg when he was 11 years old. He started boxing at the age of six after watching Mike Tyson fight, but Tyson is not his favorite fighter. He said, “My favorite boxer is Sugar Ray Leonard. He’s great. Of course, Muhammed Ali is biggest star. He is very famous. I love to watch fights with Sugar Ray Leonard before my fights. I learn from his fights. I also like to watch Gennady Golovkin, Vasyl Lomachenko, Terence Crawford and Manny Pacquaio, but my favorite is Sugar Ray Leonard.”

Bivol trains in Southern California with his trainer, Gennadii Mashyanov, while his family remains back home in Russia. It is difficult for Dmitry to be so far away from his wife and two small children. He explained, “I have two baby sons. My older son is 3 years old and my younger son is eight months old. My family is home in Russia and it is hard to know how fast your babies are growing and you can’t be there to see it. Every day I call to them and sometimes my older son calls to me when I am asleep because of the time difference.”

With an 81% knockout-to-win ratio (9 KOs in 11 wins) and newly crowned the WBA’s light heavyweight world champion, the 26-year-old Bivol rocketed to the top of the light heavyweight division in 2017. However, as Bivol explains, he did not go in looking for the knockout, “I never think about the knockout before the fight. I don’t think, ‘Oh I have to go knock this guy out.’ But when I get in the ring, of course, I want to do my best and I want to make my fans happy with a good fight. First, I think about how can I give him more punches and then I think about how I can avoid more punches.”

The winner of this championship bout will have a mandatory defense due next. The top-ranked contender is Sullivan Barrera, who is scheduled to fight Felix Valera on Saturday, November 25 as the co-feature on the Sergey Kovalev vs. Vyacheslav Shabranskyy World Championship Boxing telecast.

Bivol believes Barrera will win and the two will meet up in early 2018. He is eager to face Barrera and has watched his career closely: “I must do mandatory defense for WBA for next fight,” said Bivol. “Barrera is ranked second and I want the fight with the best guys in the WBA rankings, so I want to fight him next. I watched Barrera’s fights with Shabranskyy, Andre Ward and Joe Smith Jr. He is good boxer. He has good speed. Good Skills. Good moves. I want to fight with the best fighters.”

With all of this action in his division, the young champion sees light heavyweight as the division to watch. Bivol explained, “Pay attention to my division because now I think a lot of young stars are coming up. Watch the boxing in light heavyweight division and, of course, watch my fight.”

According to Bivol’s manager, Vadim Kornilov, “We are glad that Dmitry’s first defense of his world title will happen in Monaco and we are looking forward to a great event. We appreciate HBO giving us the opportunity to air this fight in the United States.”

Dmitry Bivol fights for the first time as a full World Champion tomorrow – and the WBA Light-Heavyweight king wants to demolish Trent Broadhurst live on Sky Sports from Monte-Carlo before targeting the rest of the belts.

Bivol held the interim title but after Badou Jack vacated the strap after a purse bid for a fight with Bivol was cancelled, the new champion starts his reign against Australian Broadhurst.

The Russian KO machine has destroyed nine of his 11 victims to date so far and the unbeaten 26 year old is determined land the IBF and WBO titles vacated by the retired Andre Ward.

“We went after the WBA title,” said Bivol. “Of course the ideal option is when you win it in a fight, when you take it away from someone. I was not lucky enough to get this opportunity. Badou Jack refused to fight me and just left the title.

“I’m glad that the WBA declared me as the champion. Now I need to prove that I deserve it and defend the belt.

“I’m the type of person that I need to set maximum goals in any business. In professional boxing, the maximum task is securing the status of being the absolute champion of the world.

“You cannot achieve good results if you do not set higher goals. Yes, this goal is not always achieved, but we must always strive for it, so I strive to become the absolute champion.”

Bivol’s last outing saw him star on the undercard of Ward’s final farewell to the sport when he beat Bivol’s fellow countryman Sergey Kovalev in a rematch in Las Vegas in June.

Bivol saw off Cedric Agnew in four rounds in his fourth outing in the States and tomorrow is his first European excursion outside Russia, and while he wants to build as big a following as possible, the Russian powerhouse has the same goal in any ring – to simply knock his opponent out.

“In reality, when you are inside the ring, mentally there is no difference whether you are at home or in the US or somewhere else,” said Bivol. “You have your opponent in front of you and that’s all I think about. I enjoy fighting in the US because the fans are very supportive and they will support the fighter they like, no matter what country or nationality he is.

“It’s all about being fan-friendly; anybody can create a big fan base for themselves in the US! We have our preparation system, our technique which we adhere to. It works well for me so we don’t change it much and just make adjustments to the different opponents we are facing.

Broadhurst sees things differently though and believes his first fight outside Australia could catapult him to stardom. The 29 year old recovered from an early loss in his eighth pro fight in 2011 to move into World title contention, picking up regional belts with the WBA and the IBF to arrive in front of Bivol – and the Queenslander is drawing on the recent success of Jeff Horn over Manny Pacquiao to drive him to victory.

“This is a big, big opportunity for me,” said Broadhurst. “I know I am up against a great fighter, just look at what Jeff did against Manny, on the day anything is possible.

“Bivol has become one of the most feared fighters in the world, I know this but it means nothing to me. He is human just like myself – I am working overtime – and will leave no stone unturned in my quest to become World champion.

“I think the first half of the fight could be a chess match and I am very comfortable against anyone like that. I don’t think he’s got one punch KO power, but he controls distance well and has rangy long punches.

“It’s brilliant to be in Monte Carlo, it’s a beautiful place and a great opportunity to show my skills in front of HBO and Sky Sports on top of an undercard with great fighters.

“My concentration on this fight is absolute, I need to lay everything on the line against this guy because opportunities like this don’t come every day and it might never come again. There’s good Light-Heavyweight’s in England so I could see myself fighting them one day too.”

Bivol and Broadhurst clash on a stacked bill in Monte-Carlo where Jamie McDonnell and Liborio Solis rematch for McDonnell’s WBA World Bantamweight title, Scott Quigg and Oleg Yefimovych meet in an eliminator for the WBA World Featherweight title and Dereck Chisora challenges Agit Kabayel for the German’s European Heavyweight title.

Bivol-Broadhurst on HBO BAD this Saturday

Dmitry Bivol is regarded as one of the best up-and-coming talents in the light heavyweight division. Now, he makes his first 175-pound title defense, as well as his HBO debut, when HBO BOXING AFTER DARK: DMITRY BIVOL VS. TRENT BROADHURST is seen SATURDAY, NOV. 4 at 5:45 p.m. (live ET/tape-delayed PT) from Monaco’s Salle Medecin Monte Carlo, followed by a primetime replay that same evening at 9:45 p.m. (ET/PT). The HBO Sports team will call all the action from ringside, which will be available in HDTV, closed-captioned for the hearing-impaired and presented in Spanish on HBO Latino.

The fight will also be available on HBO NOW, HBO GO, HBO On Demand and affiliate portals.

Russia’s Dmitry Bivol (11-0, 9 KOs) meets Australia’s Trent Broadhurst (20-1, 12 KOs) in a scheduled 12-round title bout. Boasting a knockout-to-win ratio above 80%, the dangerous Bivol, 26, is on a quest for worldwide recognition and looks to fast-track his way in the talent-rich light heavyweight division. Broadhurst, 29, has compiled a 13-fight winning streak since absorbing his first loss in 2011 and hopes to spring a major upset.

The Monte Carlo telecast continues HBO’s initiative of presenting intriguing fights from across the Atlantic in a late-Saturday afternoon time slot. In the past three years, HBO Boxing has also visited London, Yekaterinburg, Russia, Hamburg and Dusseldorf.