Chris Eubank Jr has never had a good word to say about Billy Joe Saunders and most likely never will; and vice versa. These two men do not like, or respect one another, one little bit.

When the two fought back in November of 2014, Saunders won a close decision in a fight that saw the southpaw retain the European and British middleweight titles.

Both men have been through quite a lot since. Saunders was last seen being stopped by Canelo Alvarez, with the Mexican busting up Saunders’ eye in nasty and painful fashion last May.

Saunders contemplated retirement yet he now says he would come back for a big fight – and a return with Eubank Jr is a big fight.

Eubank, now training with Roy Jones, feels he has vastly improved as a fighter, yet Saunders, who spoke with Talk Sport, says he feels his fellow Brit has “got worse.”

Saunders, 30-1(14) says he would welcome a return with Eubank, as it would “be good to make him look stupid.” Eubank wants a world title shot and he has said how Saunders “brings nothing to the table” in a return fight, yet at the same time Eubank has said a sequel is possible. As a grudge-match that would attract plenty of fan attention – the build-up alone would be tense, hate-filled, and very possibly an X-rated affair – this one does make sense.

“I would come back for a big fight and obviously he is a big fight,” Saunders said of a Eubank return. “I’m a big fight to him and he’s a big fight to me. So listen, I’m open for talks, they can contact me direct, I’m my own boss, we can get cracking and see where it goes. But from a boxing side of things, I think he’s got worse if I’m honest. I don’t need to go in there to prove I’m a better man than him, I already know that. But it would be good to make him look stupid.”

Saunders added how he thinks Liam Williams, who Eubank decked X4 and widely outpointed on Saturday, “had a bad night.” Saunders was not impressed with Eubank’s moves – “trying to imitate Roy Jones, he looked like a baby giraffe,” Saunders said of Eubank.

But who wins if Saunders and Eubank do fight again? How much did that painful loss to Canelo take out of Saunders? Has Eubank, 32-2(23) really “got worse” as a boxer since 2014? If Eubank cannot get a world title chance, and if Saunders cannot get himself another big fight, this rematch makes a lot of sense for both guys. And fans would certainly tune in; especially if Saunders-Eubank II was kept off the pay-per-view.

What do YOU think: repeat or revenge? 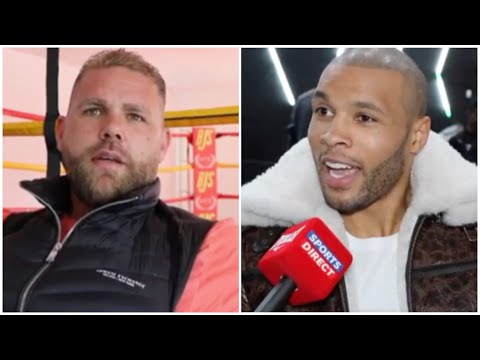