Danny Jacobs (37-3, 30 KOs) and John Ryder (30-5,17 KOs) square off this Saturday night live on DAZN in a WBA 168-lb title eliminator to decide a mandatory for champion Canelo Alvarez at the Alexandra Palace, London, England.

It’s unclear whether undisputed super middleweight champion Canelo Alvarez will agree to fight the winner of the Jacobs vs.Ryder fight.

It’s very likely will win on Saturday, and there aren’t a lot of boxing fans in the U.S  that will be interested in seeing a rematch between Canelo and ‘The Miracle Man’ Jacobs.

They already saw Canelo beat Jacobs in 2019, and that was enough for many fans not to want to see them fight ever again.

If Canelo does choose to fight a rematch with Jacobs, it would be clear that he’s just looking for an easy money fight as we saw from him last year.

Promoter Eddie Hearn believes that the Jacobs-Ryder loser will never fight for a world title again. Given their ages, Hearn could be right. Jacobs is 35 and has looked like a shell of his former self since his loss to Canelo in 2019.

Even Jacobs was in his prime, he owed much of his success for him being huge for the the160-lb  weight class.

But now that Jacobs is fighting at 168, his size advantage that he used to enjoy is gone, and he can’t be counted to defeat the talented fighters in the division like David Benavidez, David Morrell Jr., or Demetrius Andrade.

“I do, but I think Danny Jacobs is the favorite,”  said Hearn to iFLTV when asked if Ryder can win this Saturday night.”I think it’s brilliant for British boxing to see someone like Danny Jacobs over on these shores.

“I  was trying to think the last time there’s a fighter as big as or with the profile from America of Danny Jacobs coming to the UK,”  said Hearn.”You go back to Terence Crawford when he boxed Ricky Burns, but no one really knew who he was then.

“When Errol Spence challenged Kell Brook, but no one really knew a great deal about him. Gervonta Davis was young and starting out when he came over and beat up Liam Walsh.

“Danny Jacobs is a guy, a two-time world champion, an incredible story, massive profile in the States, and that is part of the reason why we made this move. So we can bring names like Danny Jacobs over to fight in the UK.

“He’s exciting,” said Hearn about the 35-year-old Jacobs. “He’s got a little bit of a chip on his shoulder because the last time out against [Gabriel] Rosado, his performance wasn’t great.

“I feel like he’s taking this opportunity to make a statement, but he’s doing it two miles from where John Ryder lives.

“We’re going to have nearly 7,000 in there, and the atmosphere is going to be unbelievable, but it’s a  really good fight,” said Hearn in wearing his promoter hat.

Ryder says ‘The loser is done’

“John Ryder, I  like his attitude in this fight because yesterday, he said something  like, ‘The loser is done.’  It’s not often a fighter says that because they don’t want to put that kind of pressure on themselves, but for John, I don’t think he cares.

“He openly admits, ‘If I lose this fight, I’m done,’ because he wants to win a world title, he wants to go and challenge for a world title [against WBA  168-lb champion Canelo Alvarez],” said Hearn.

Interestingly, Jacobs rejects the idea of him being done as a marketable fighter should he lose to Ryder. Jacobs believes he’ll still keep getting chances after a loss to Ryder, and he could be right.

But a defeat for Jacobs against a fighter of Ryder’s level would be a clear sign that his days as a headliner-level fighter are coming to an end.

Jacobs arguably lost his last fight against fringe contender Gabriel Rosado last November in their headliner on DAZN. Moreover, it’s been four years since Jacobs beat a high-caliber contender in Sergiy Derevyanchenko in 2018, and that was a close fight.

After that win, Jacobs was given a big payday against Canelo Alvarez in2019, and he lost that match. Since then, Jacobs has taken soft opposition in facing Julio Cesar ChavezJr. and Rosado, both of which were main event fights on DAZN.

Hearn said in an interview before the Rosado fight that he wanted Jacobs to fight Callum Smith, but he chose Rosado, a fighter with 14 defeats on his record. Why did DAZN agree to let Jacobs headline against Rosado and Chavez Jr?

“Danny Jacobs wants to be a two-division, three-time world champion,” Hearn continued. “John Ryder wants another shot at a world title. I think it’s a really good fight, and I think it’s two guys that have 12 rounds to make it count.

“So with John Ryder, he mustn’t muck around in this fight. He’s got to get it, and you don’t want to be boxing Danny Jacobs at range. You want to get up close and make it hard for him.

“I think Danny Jacobs is in the kind of mood where he will fight in this fight because he knows last time out against Rosado behind closed doors, he wasn’t great, and I think this time he’s here to make a statement. I think it’s a really intriguing fight,” said Hearn on Jacobs needing to prove that he’s still got it at 35.

Jacobs looks shot at 35, and it won’t be surprising if he loses Ryder, who is more of a fringe-level type of fighter than a true top five.

It’s scary to think that Jacobs vs.Ryder is a WBA 168-lb title eliminator because boxing fans won’t like the idea of Canelo fighting the winner of this match in 2023. 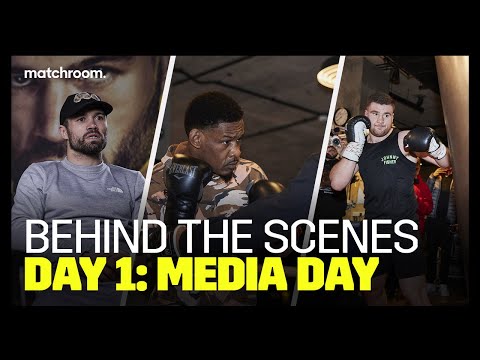