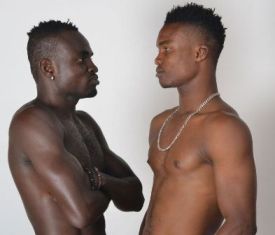 By Prince Dornu-Leiku – Despite the tragic death of his mum in a ghastly motor accident barely four days before fight night, Asamoah Gyan’s debut as boxing promoter will still come off Saturday night at the Accra Sports Stadium, with the newly appointed Ghana national soccer team captain expected in the country to supervise the ‘Clash of Kings’ bill.

Former IBF Intercontinental and WBO Africa champion at Junior Lightweight, Emmanuel Tagoe (18-1, 8 KOs) and reigning Commonwealth Junior Lightweight champion George Ashie (23-3-1, 16 KOs) clash for the WBA International Lightweight belt in the main event of the 6-bout bill of Gyan’s BabyJet Promotions.
An electric atmosphere is expected beginning with Friday morning’s weigh-in and press conference which will set the stage for the real thing the next day. With both boxers boasting a vociferous fan base, Saturday night’s fight extravaganza at the nation’s number one sports centre could also possibly be the biggest boxing event ever staged in the history of the West African country famous for producing world champions.
Some of Asamoah Gyan’s footballer and musician friends are also expected in tow to lend their full support to the part-time musician with their presence and performances in-between fights.

Tagoe is trained by the legendary Azumah Nelson, former world champion and Hall of Famer of course whilst Ashie’s coach is Godwin Djanie Alloway, the trainer Joshua Clottey claimed would have helped him beat Pacquiao.

The crafty Tagoe, known to his fans as Game Boy has vowed to teach Ashie boxing lessons he will never forget but the soft spoken Ashie , nicknamed Red Tiger, won’t budge declaring to let his fist do the talking in the ring.

“If I win the fight through a majority decision I’ll stop boxing, I’m going to discipline Ashie and win by a unanimous decision. I want to also tell my fans to work hard to get a lot of money to bet because I assure them I will win for them to double their money as a compensation for their loyalty of support to me over the years. I will prove to all Ghanaians that I’m the best in the country,” Tagoe has sworn.

Ashie responded: “Boxing is in the ring, not a matter of big talk so my hands will do the talking for me in the ring. I’m fully fit and prepared enough to deliver so I’m calling on all my fans to come in their numbers and I promise to make them happy.”

Five other fights are also scheduled for the BabyJet Promotions maiden event, all pugilist also set for the weigh-in tomorrow at the D.G. Hathiramani Hall at the Accra Stadium.
For ticket reservations call +233-24-322-6098 or +233-20-811-5825