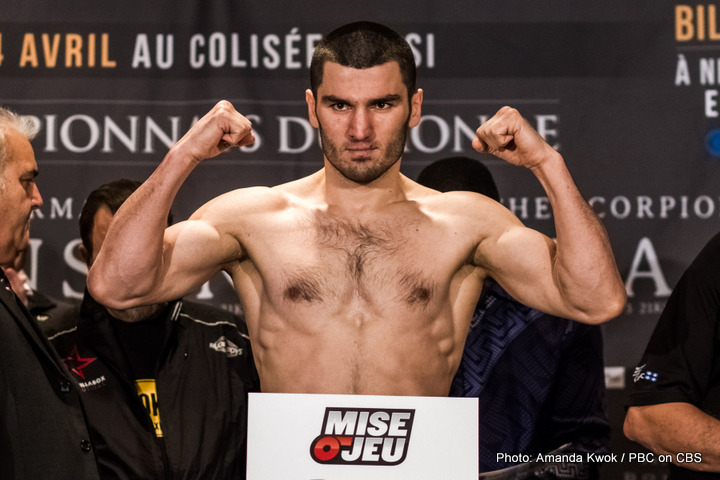 Exciting and talented light-heavyweight puncher Artur Beterbiev looks to make up for lost time this Saturday in a fight to be televised live by ESPN. The former amateur great will take on Ezequiel Maderna in Montreal in what will be the 31-year-old’s first fight in almost a full year. The 9-0(9) contender suffered a bad right shoulder injury and needed surgery. Now, the Russian destroyer aims to take aim at the 175-pound champions, Sergey Kovalev especially.

The fight on Saturday, against Argentine Maderna – who is 23-2(15) and has never been stopped – is no gimme and Beterbiev needs to both feel and look good before he can move on. But, in speaking with RingTV.com, Beterbiev’s promoter Yvon Michel makes it clear the world titles are his fighter’s goals, this along with reaching the status of superstar.

“Right now, we really think Artur Beterbiev is the most dangerous challenger, pound-for-pound, in the world,” Michel said. “The question is not if he is ready, because he already is. The real question is when will he have the opportunity to fight for a world title. The main objective is to aim for all the belts retained by Sergey Kovalev. If Artur didn’t injure himself, he would already be the IBF mandatory challenger. This injury delayed his chance at a title by a year. We also want people to realise that Artur is on his way to becoming a superstar.”

A fight with his countryman Kovalev, who holds the IBF, WBA and WBO belts, would be huge, and if Beterbiev were to win, he would be on his way to the superstardom people feel he can achieve. Whenever a fighter has dynamite in his fists, as Beterbiev clearly does, fans are attracted in a big way. Kovalev is also a monstrous puncher, put the two together, and you have a potentially great, can’t miss fight.

Beterbiev wants these mega-fights; he just needs to get rid of any rust he has picked up and get back to flattening opponents. This will begin on Saturday night and Michel says he plans to have Beterbiev fight two more times this year after Saturday – before the assault on the world titles begins. It’s going to be fun watching this pure puncher do his stuff.