In the sport of boxing sometimes the obvious takes a significant amount of time to develop from a thought to an actual event. For example, approximately four years ago we all knew Errol Spence Jr. vs Terence Crawford was one of the biggest matchups in boxing, but four years later we’re still impatiently waiting for the fight to be officially announced.

At times, the business of boxing hurts the sport because the fans don’t get the fights they want to see. The fans are the paying customers, and they want to see the premier matchups. This past weekend the end result of the Saturday night main event enhanced the interest in regards to pairing up the two light heavyweights who are currently the best of the best.

Going into the unification bout between Artur Beterbiev and Joe Smith Jr., the narrative was consistent. Due to the fact that both boxers are incredible power punchers, no one expected this bout to go the distance. WBO champion Joe Smith Jr. had 28 victories with 22 of those victories coming by way of knockout, and all of the WBC/IBF champion Artur Beterbiev’s past opponents experienced the same type of ending as Beterbiev came into Saturday night’s bout with 17 wins, and all 17 came by way of knockout. It took Beterbiev a little over five minutes to demolish Smith Jr., and add the WBO light heavyweight title belt to his collection.

On Saturday night June 18, at the Hulu Theater in Madison Square Garden, Joe Smith Jr. started the main event by using his jab. The WBO champ was controlling the pace of the first round until Beterbiev found success when he started throwing the overhand right over Smith Jr’s jab. With less than ten seconds to go in the first round, Beterbiev caught Smith Jr. with a crushing overhand right that sent the WBO champ down to the canvas. It was the first time Joe Smith Jr. ever experienced being knocked down by his opponent.

Thirty-eight seconds into the second round, Beterbiev knocked Smith Jr. down for a second time when he caught him with another overhand right. Beterbiev would score two additional knockdowns as the referee called an end to the fight with forty seconds left to go in round number two. With the victory, Beterbiev has three of the four belts. After Saturday night’s performance fans are interested in witnessing a bout for the undisputed championship between Artur Beterbiev and the owner of that fourth light heavyweight title belt.

A little over a month ago in Las Vegas, Nevada, WBA light heavyweight champion Dmitry Bivol knocked the pound-for-pound king off of his throne, as he defeated Saul “Canelo” Alvarez by way of a unanimous decision. Bivol showed the total package as he used his jab, threw effective combinations, moved well around the ring, and controlled the pace of the fight. Bivol used a well-executed performance to collect the biggest victory of his professional boxing career.

With Dmitry Bivol’s (20-0, 11 KOs) big win over Canelo, and Artur Beterbiev’s (18-0, 18 KOs) impressive knockout victory over Joe Smith Jr., the results of both fights have created an intensified demand for a Beterbiev-Bivol clash for the undisputed light heavyweight championship. It would be a classic battle as Bivol the boxer, would have to strategically find a way to use all of his finely crafted boxing tools to defeat Beterbiev the heavy-handed power puncher. A fight between these two champions is very intriguing, and now is the perfect time to make this fight, but unfortunately, the politics of boxing may prevent this match from happening.

A discordance between promoters and the networks are normally the usual culprits when it comes to the reasons why certain fights are difficult to make. However, Dmitry Bivol’s promoter Andrey Ryabinskiy, seems to be very interested in organizing a bout between the two champions. On the other hand, Artur Beterbiev’s promoter, the Top Rank boss, Bob Arum has already verbalized a potential issue in regards to making the match.

Arum’s Top Rank, has an exclusive television and streaming deal with ESPN while Bivol is currently involved in a deal with Eddie Hearn’s DAZN. Arum isn’t a fan of the subscription-based streaming service, and he reiterated it while conducting a recent interview. “One thing with Beterbiev is that now he’s known to the public and so many people have seen him, we ain’t doing a fight on ‘Dead-Zone,’ which nobody watches,” Arum stated.

Hopefully, the battle of the networks won’t derail this blockbuster matchup because both fighters want the opportunity to achieve the dream of becoming undisputed. “I don’t feel I’m the best light heavyweight in the division. I don’t feel it because I don’t have all the belts. If I have all the belts then I feel I’m the best, but now I am one of the best, ” Dmitry Bivol stated at his post-fight press conference a month ago.

Much like Bivol, Artur Beterbiev wants the opportunity to be the one and only. “Unification fights are more interesting, more motivating. I prefer a unification fight. I want to be undisputed,” Beterbiev stated during his post-fight press conference this past Saturday.

Beterbiev-Bivol is the fight to make, and hopefully, that nasty word called ‘politics’ doesn’t hurt the chances of this fight being made.
Both fighters want this bout, the boxing fans want it, and now is the time to make this match due to the fact that everything about this bout makes perfect sense.

Both boxers are undefeated, the potential bout is a classic pairing of boxer versus puncher, the winner will be the undisputed light heavyweight champion, and most importantly of all, the fight is in demand. 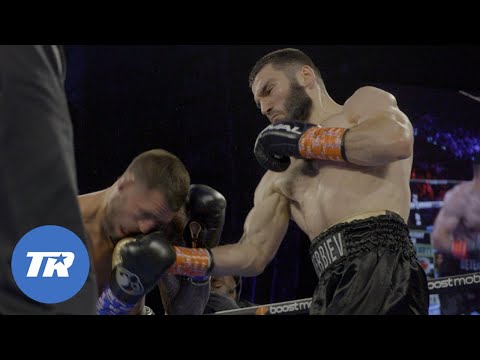