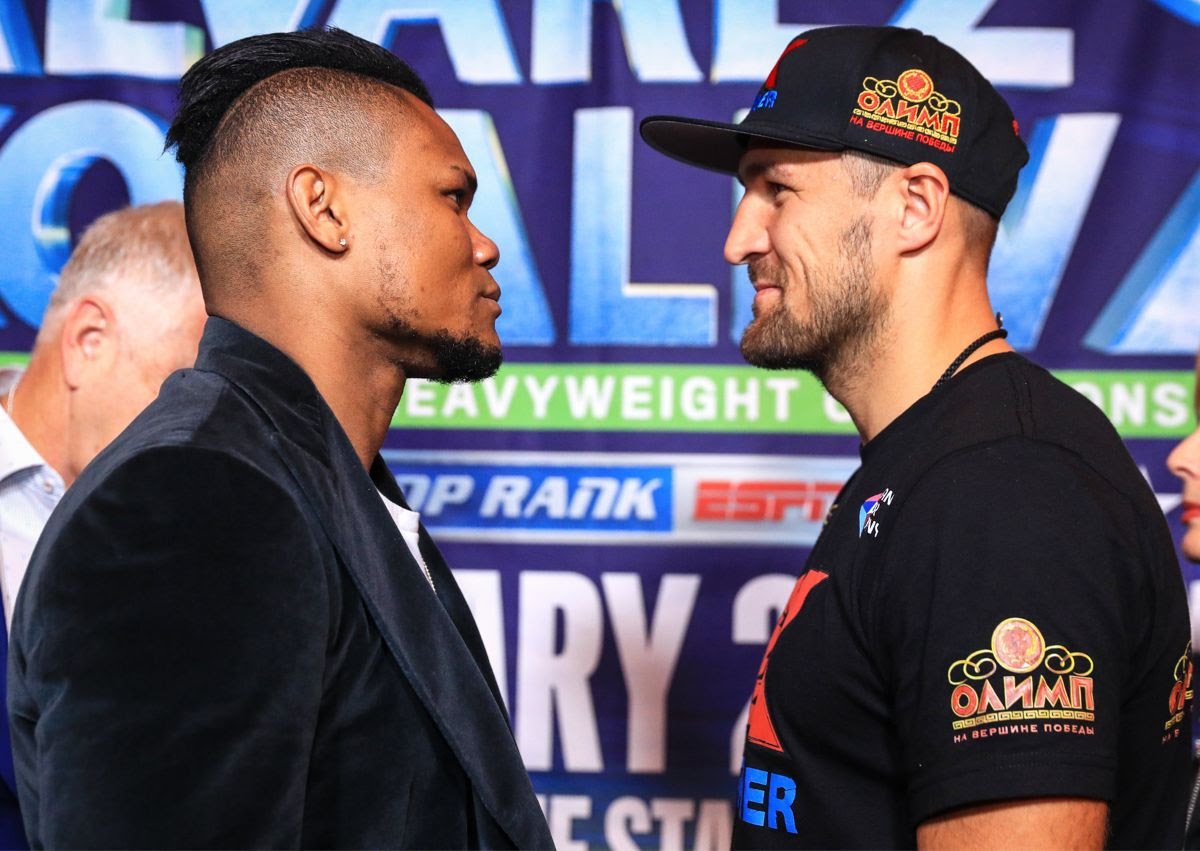 Four significant fights, three world title bouts, one rematch for the ages, all on ESPN and ESPN+. The best card of 2019 is coming to North Texas.

The hotly anticipated light heavyweight world title rematch featuring WBO champion Eleider “Storm” Alvarez and challenger Sergey “Krusher” Kovalev will stream live on ESPN+ and headline a huge night of boxing that will showcase a quartet of meaningful fights — including three world title bouts — spread across ESPN/ESPN Deportes and ESPN+ on Saturday, Feb. 2 at Ford Center at The Star, home to the Dallas Cowboys World Headquarters and training facility.

Alvarez-Kovalev 2 and the return of unbeaten lightweight sensation Teofimo “Brooklyn” Lopez, fresh off a 44-second knockout of Mason Menard on Dec. 8, will stream live starting at 12 a.m. ET on ESPN+ — the multi-sport, direct-to-consumer subscription streaming service from The Walt Disney Company’s Direct-to-Consumer & International segment and ESPN.

Before the action turns to ESPN+, a pair of world title fights will take place on ESPN and ESPN Deportes, beginning at 10 p.m. ET.

Oscar Valdez will make the fifth defense of his WBO featherweight title against the unbeaten Carmine “Mr. Wolf” Tommasone. Valdez will be making his first ring appearance since suffering a severely broken jaw in a March 10 unanimous decision win against an overweight Scott Quigg.

Before the ESPN telecast, the entire undercard will stream live on ESPN+ starting at 7 p.m. ET.

Promoted by Top Rank, Main Events and Krusher Promotions, in association with Groupe Yvon Michel, tickets priced at $225, $165, $85, $55, and $25 (including facility fees) are on sale now and can be purchased at SeatGeek.com.

“It’s Super Saturday, and by syncing the ESPN linear and ESPN+ platforms for one night, fans have an incredible opportunity to watch a stacked show with many of the world’s best fighters and rising superstars,” said Top Rank President Todd duBoef.

Valdez (24-0, 19 KOs) made his name as one of the sport’s foremost action stars with a trio of 12-round wars against Miguel Marriaga, Genesis Servania and Quigg. The Quigg fight was shrouded in controversy as the Englishman missed the featherweight limit by nearly three pounds and refused a day-of weight check. Valdez fought with a broken jaw against Quigg for more than half the fight and still managed to prevail via clear unanimous decision. Valdez, whose jaw was wired shut for two months after the bout, is ready to move on and prove that the injury was nothing more than a speed bump.

“It will be great to see our little warrior, Oscar Valdez, back in action on Feb. 2 after his full recovery from a broken jaw and a courageous victory over Quigg,” said Top Rank chairman Bob Arum. “Oscar always brings thrills and excitement to his fights.”

“The fans can expect the same Oscar Valdez as far as being an aggressive and exciting fighter,” Valdez said. “They are also going to see a different side that nobody has seen, which is the boxing skills that I also have and that I’m perfecting and learning with my new trainer, Eddy Reynoso.”

Tommasone (19-0, 5 KOs), an eight-year pro from Avellino, Campania, Italy, is a former Italian, European and WBA Intercontinental champion who will be making his first ring appearance outside of his home country. He captured the vacant European crown on Sept. 26, 2015 with a wide unanimous decision win against Jon Slowey. Tommasone made history at the 2016 Rio Olympics as the first professional to take part in an Olympic boxing match. One of three pros to participate at the 2016 Olympics, Tommasone won his opening bout before losing to the eventual bronze medalist, Cuba’s Lazaro Alvarez.

Lopez (11-0, 9 KOs) has established himself as one of the sport’s rising superstars, a 21-year-old power-punching prodigy who is on the cusp of a world title shot. The one-punch KO of Menard, a “Knockout of the Year” candidate, was televised by ESPN on the Vasiliy Lomachenko-Jose Pedraza undercard. Following the knockout, Lopez went viral after he struck the Heisman pose and wore the jersey of Heisman Trophy winner Kyler Murray of the University of Oklahoma.

“I took over my last show, and I am going to do it again,” Lopez said. “‘The Takeover’ is coming to Texas, and I can’t wait to get back in the ring.”

Commey (27-2, 24 KOs), a native of Ghana and the IBF’s No. 1 contender, has won three consecutive bouts since a two-fight losing skid. He lost a razor-thin split decision to Robert Easter Jr. for the vacant IBF lightweight title on Sept. 9, 2016, knocking down Easter in the eighth round. Less than three months later, he was on the short end of another split decision, a controversial verdict against Denis Shafikov in Shafikov’s home country of Russia. Commey last fought Aug. 4 against Yardley Armenta Cruz and had little trouble in notching a second-round TKO.

Chaniev (13-1, 6 KOs) is battle-tested, having gone 10 rounds or more in five of his past six bouts. He is on a three-bout winning streak since a close 12-round unanimous decision to Fedor Papazov on May 25 of last year. He is coming off his most impressive victory to date, a unanimous decision against former interim lightweight world champion Ismael Barroso. Chaniev survived a second-round knockdown to score a pair of knockdowns and secure the win.

“When I started working with Richard in September 2016, our plan was to give him another chance to fulfill his dream of becoming a world champion,” promoter Lou DiBella said. “While Chaniev is a very tough Russian fighter, I’m confident that Richard has the skills, punching power and the mental toughness to come out victorious. Thanks very much to ESPN and Top Rank for partnering with DiBella Entertainment in televising this outstanding lightweight championship battle.”

“I have to say a big thank you to my promoter, Lou DiBella. I know how hard it is for Ghanaian fighters to get promoted by the top promoters, but Lou has consistently shown that if he thinks you’re the man, then he will be the man for you,” Commey said “He has shown this by the investment DiBella Entertainment has put in me and by getting me this shot at the title and securing it in the United States. I also want to thank my manager, Michael Amoo-Bediako, for the faith he has put in me over all these years. He is more than a manager to me, and come Feb. 2, I will be repaying him in full.”

“I have the biggest motivation ever to win, and there is no other result that will satisfy me,” Chaniev said. “On Feb. 2, I will demonstrate all my skills and hard preparation. Some people don’t think I will win, but they will be shocked on Feb. 2. No bad words or any disrespect to Commey. He is an excellent fighter.”

Use the hashtag #AlvarezKovalev2 to join the conversation on social media.