The pressure was the name for the game for Alexis Rocha (19-1, 13 KOs) with him pressing Blair Cobbs (15-1-1, 10 KOs) until he broke him in the ninth round to score an impressive knockout on Saturday night on DAZN at the USC Galen Center in Los Angeles, California.

The referee stepped in and stopped the fight in the ninth round after Rocha hurt Cobbs after hitting him with repeated right hands while the two were in a clinch.

If Cobbs knew how to clinch properly, he wouldn’t have been hit by those shots. Nevertheless, he was hurt and staggered backward against the ropes and was getting pummeled by Rocha at the time of the stoppage.

For Cobbs, the beginning of the end came in the eighth round when Rocha knocked him down with a right hand to the head after trapping him against the ropes. Cobbs had done an admirable job of using upper body movement to avoid a flurry of shots from Rocha, but he didn’t see a right hand from him that put him down hard.

Despite being badly hurt, Cobbs did a good job of making it out of the eighth round. In the final seconds of the round, Rocha unloaded a flurry of shots that had the referee close to stopping the contest.

In the earlier rounds, the 32-year-old Cobbs constantly circled around the ring, flicking jabs, and occasionally stopping to throw wild shots that mostly missed.

It was during the times that Cobbs would stop moving that the southpaw Rocha would nail him with huge left hands to the head. Cobbs looked like he was in distress from the fourth round, as he didn’t have the power to keep Rocha off of him.

Unfortunately for Cobbs, his defense wasn’t good enough for him to avoid the big left-hand shots that Rocha kept catching him with. Really, the only defense that Cobbs had was his legs by moving constantly, and that took a lot out of him by the later rounds.

In the fifth round, Rocha caught Cobbs with a big left hand that stunned him, causing his legs to wobble for a second. To his credit, Cobbs was able to quickly recover and use the ring to avoid getting caught with any additional left hands from Rocha.

Cobbs looked stressed out in the sixth, eating left hands from Rocha against the ropes. The mobility of Cobbs saved him from getting taken out in the sixth because he looked done.

If not for Cobbs’ legs, he would have been stopped because he was getting beaten up by Rocha, and couldn’t keep him off with his weak slapping shots. 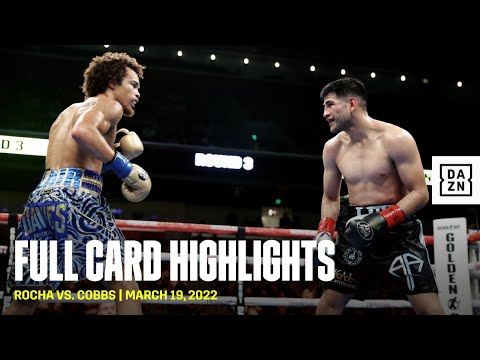