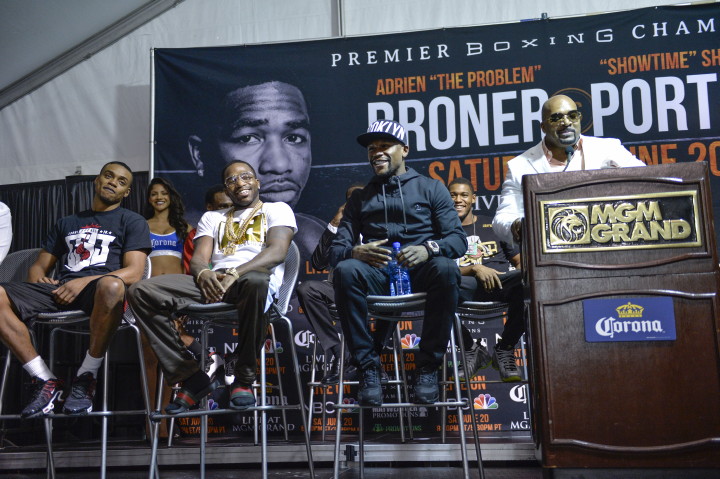 Speaking at this week’s media scrum via fighthub Broner appeared to be talking the talk, seemingly suggesting that Porter sees the fight – and “The Problem” – as his big shot.

On what, if anything, he read into Porter’s eyes following the head-to-head, Broner said;

“I see (an) opportunity – that any boxer coming up would love. And he knows this is the opportunity of a lifetime and I know he’s gonna come to fight – and I will be ready. For whatever he brings to the table.”

And of the magnitude of the event, he said;

“It’s only a big fight ’cause he fighting Adrien Broner – but this is only another day at the office for me.”

After 3 pretty routine fights, most would consider this Broner’s first real test since being beaten by Marcos Maidana in December 2013, yet Adrien seemed slightly offended at this notion, suggesting that he has been “back” and looking for – and struggling to find – credible opposition.

It might be wise for Broner to find his correct weight before calling out the premium names, especially at 147 lbs. After all it is he who imposed the 144 lb catch-weight limit and 10 lb re-hydration clause on Porter in the first instance – and we are yet to see how that will impact upon Broner’s stockier foe.

Perhaps sensing there may be some problems for Porter, who has been critical of the catch-weight this week, Broner offered his opinion on the outcome;

“I know he gonna come in tough, rough – and like always though – I’m gonna get past this test.”