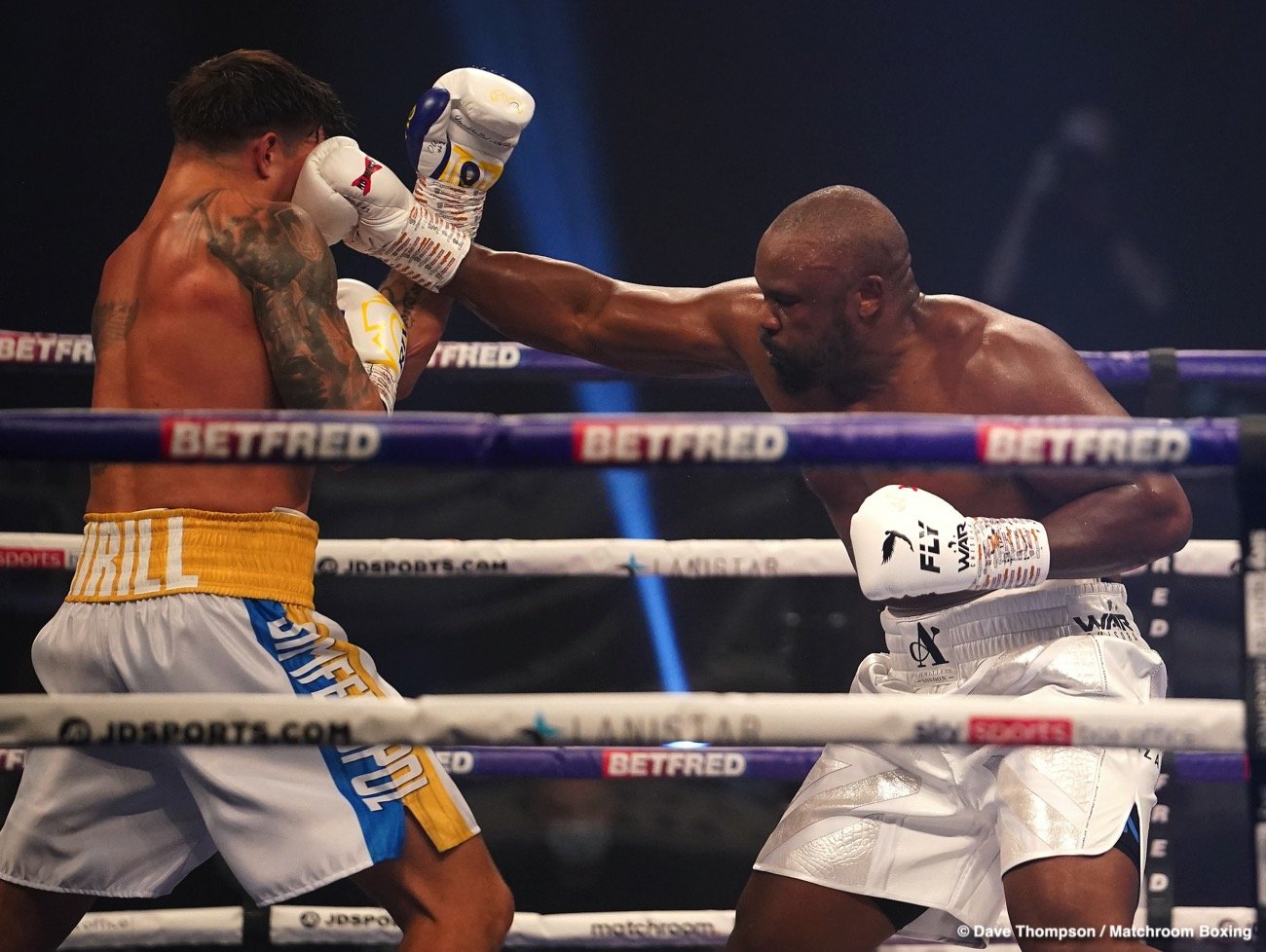 Usyk’s slow start in the first four rounds is why it was difficult to give him the win because he’d given away a quarter of the fight before he started having any success.

Chisora, 36, gassed a little bit from the pace that he set, which enabled Usyk to take over the contest and cruised to a victory.

If Dereck had been able to keep fighting hard, he would have likely won a one-sided 12 round decision if he didn’t play knockout Usyk. 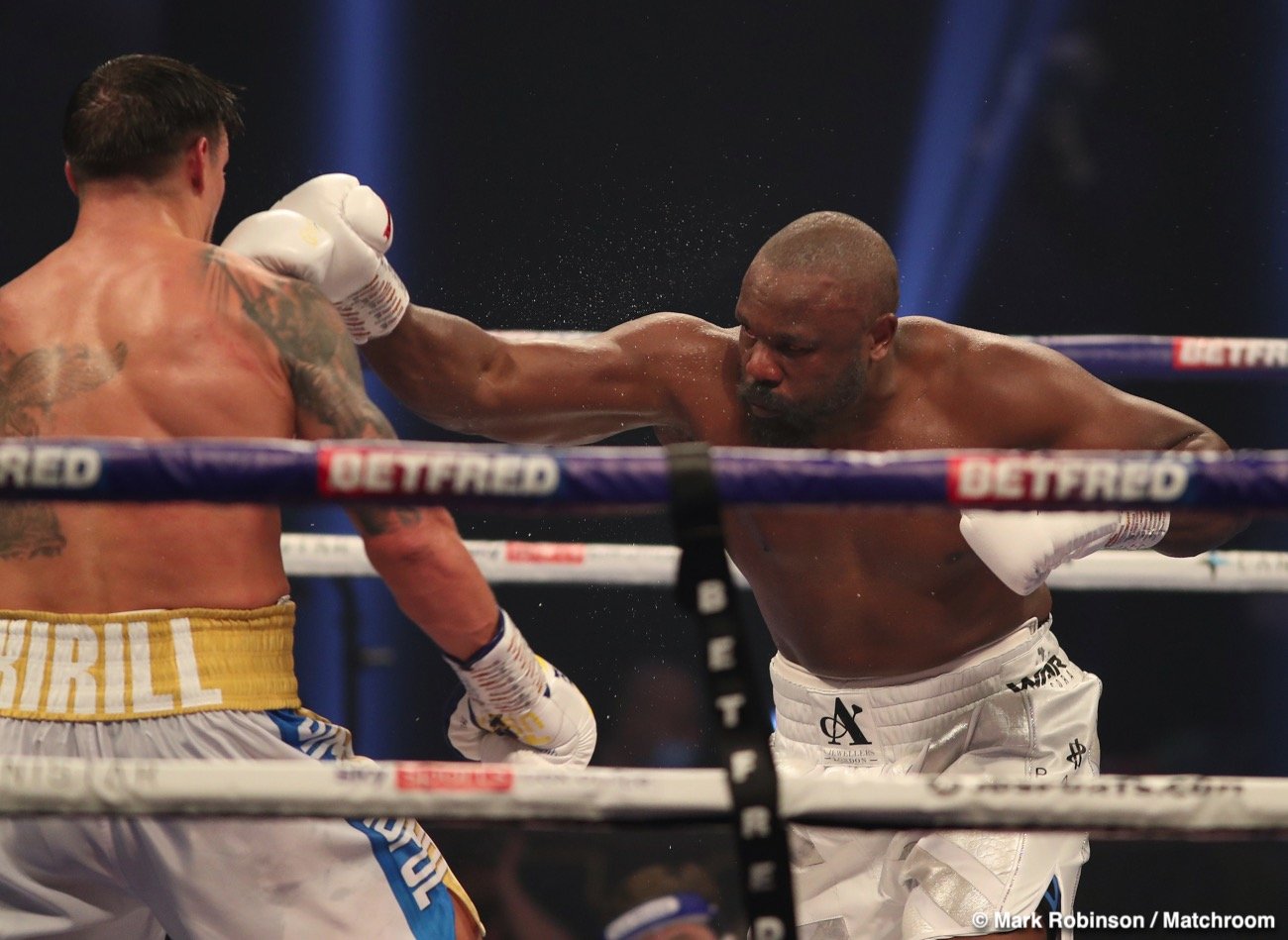 Chisora’s loss means he won’t be fighting for a world title, and that’s got to be a real let down. If he had beaten Usyk, 33, he would have become the new WBO mandatory challenger to Anthony Joshua.

Dereck believes he deserved the win

“Yeah, but it is what it is. It’s the fight game,” Chisora said to IFL TV when asked if he thought he did enough to beat Usyk. “I said I’d give the fans a great, great fight, and I think I did. I pushed it.

“I was on the front foot, I kept going forward always punching. A couple of rounds I gave away, but that didn’t make me lose this fight. But get up, brush off and move on. I thought he [Usyk] fought my fight.

“He didn’t have much power,” Chisora said of Usyk. “When a heavyweight hits you, it’s, ‘Damn, I’ve been hit.’ But this guy was coming,” said Dereck.

If you’re going by pure pressure, Chisora should have been the decision by the judges.

But it was clear that Usyk did the better work in the vast majority of the rounds in the second half of the contest, and he finished strong in winning the 12th. If Chisora had won the 12th, he would have evened the cards.

Unfortunately, Chisora didn’t have enough left after round 11, and Usyk took advantage of his fatigue to take the 12th.

The fight was close enough to argue that a rematch would be in order, but Usyk has other ideas. He wants to fight for the WBO title, be it against Anthony Joshua, or for the vacant belt if AJ gives up. 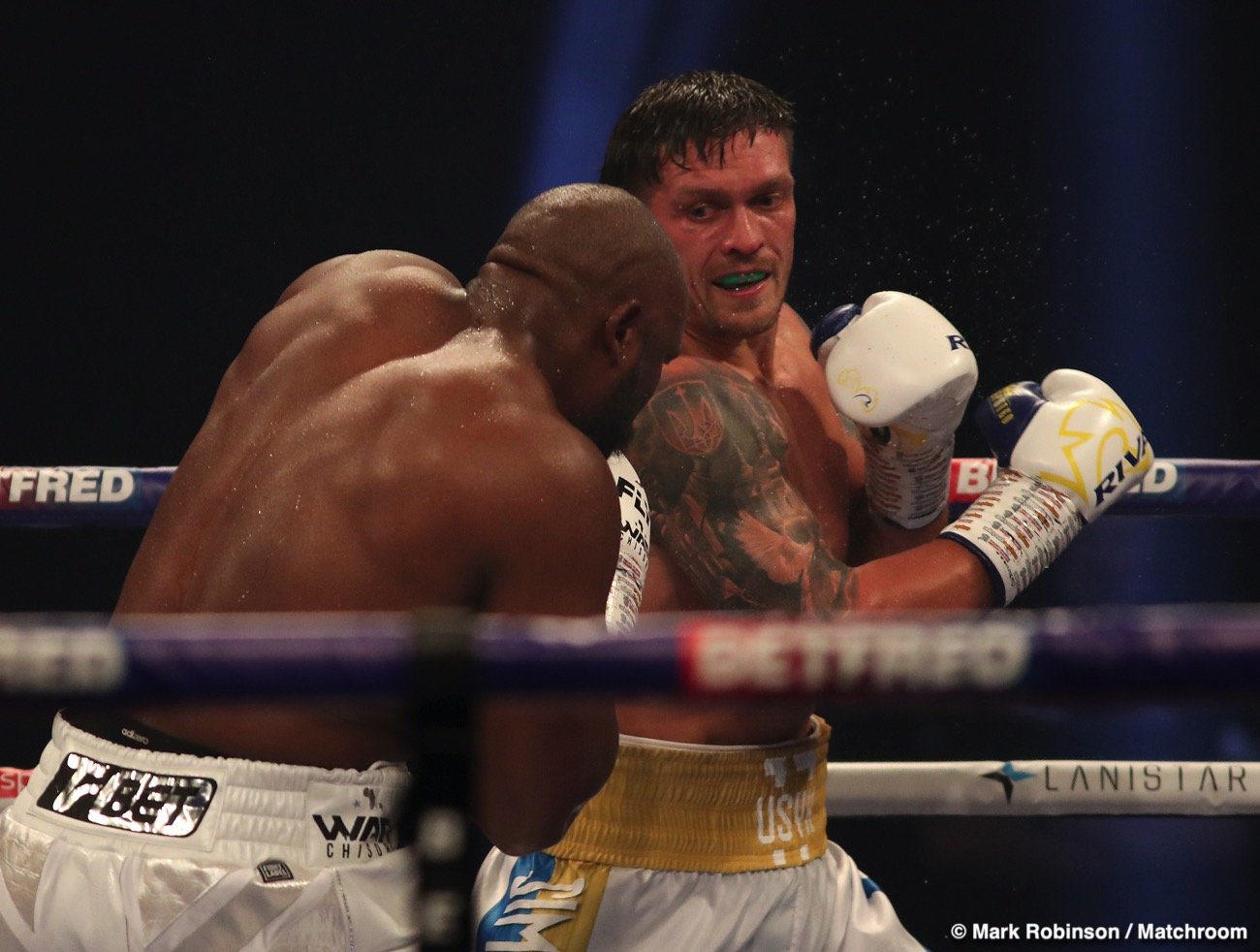 #8 WBO Chisora doesn’t possess a high enough ranking with the World Boxing Organization for him to fight Usyk again when or if Joshua vacates the title or has it stripped from him.

If the WBO title falls vacant, Usyk would be fighting the next available and winning contender in the top 15 with the sanctioning body. That would be one of these fighters:

For Chisora, he’s got to get some quick wins under his belt for him to get in position for a world title shot. Luckily for Chisora, his promoter Eddie Hearn has access to many top contenders in the heavyweight division he can match him against. Michael Hunter or Filip Hrgovic would be ideal for Chisora.

It’s unclear if Chisora can beat those guys, but if he does, he’ll be on the doorstep for a crack at a world title.

Chisora not retiring yet

“Two weeks off and I’m back in the gym,” said Chisora. “Keep grinding. The whole singing part and the whole crowd part, but it’s what’s happening around the world,” Chisora said when asked if he misses the crowd.

“I think in a year and a half, the crowd will be back in. You think I’m joking? It don’t look good. Year and a half, 100 percent. And for the economy to go back, it’s going to be four and a half years for everything to open up.

If Chisora weren’t still fighting at a high level, it would make sense for him to consider hanging up his gloves, but he seems to at his career-best. Unfortunately for Dereck, his peak is coming at a bad time, with the pandemic limiting his options for big fights.

Hearn must find Chisora; an opponent ranked in the top 15 to fight in early 2021. If he can beat that guy, it’ll move him up the rankings. 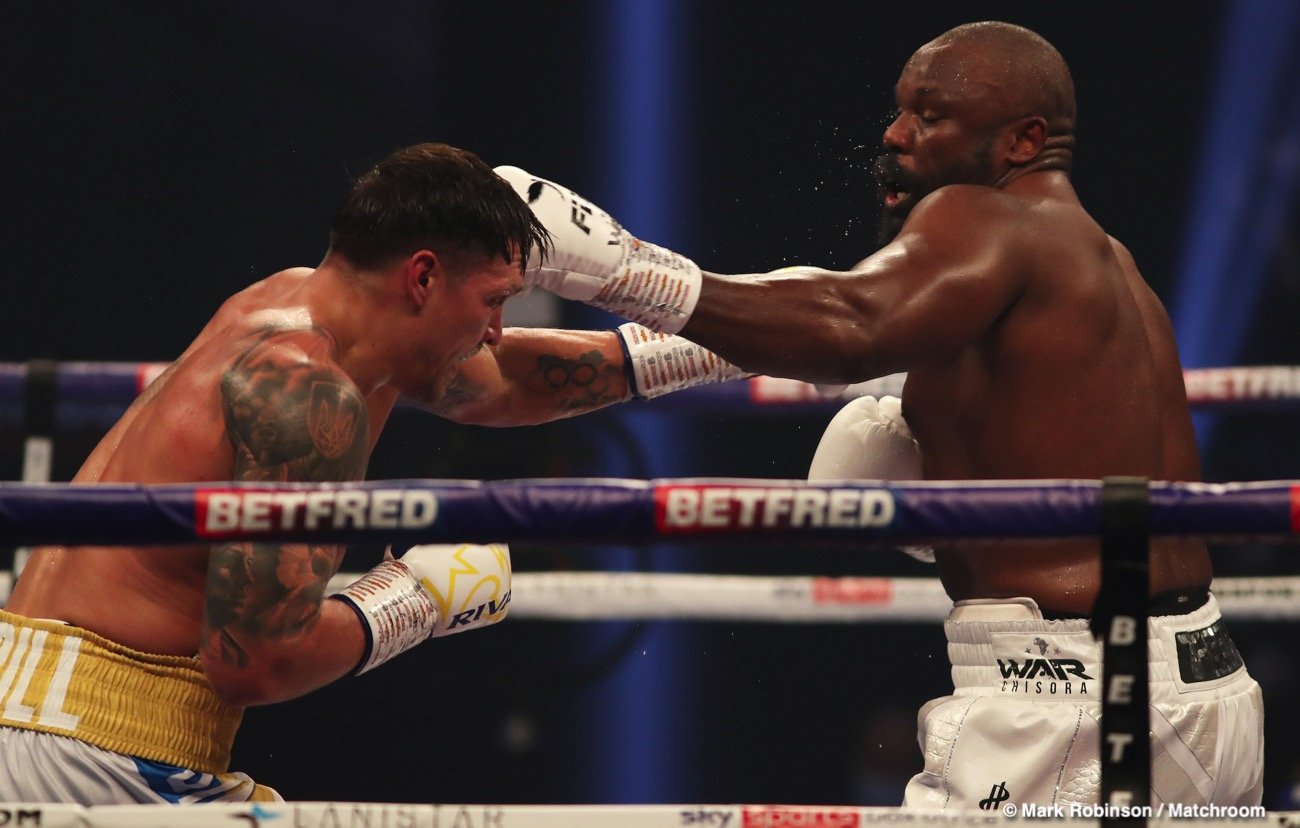 Haye: Usyk was running away

“Who thought Dereck Chisora could turn southpaw and out-jab Oleksandr Usyk?” said David Haye. “No one. Rewatch the fight without the commentary and enjoy it.

“Who landed the most punches? That’s what boxing should be about. We can only control what we do in the ring. What happens with the judges is down to them.

“Dereck proved what he’s all about. He’s about war. About coming in and letting them guns fire. This is the first time that he’s been in optimal shape. He’s only going to get better.

“Oleksandr boxed great. He took some shots, and he was tougher than I thought. But he had to run away a lot of the time. He was literally running away. The body shots were doubling him in two. It was an insane fight.

“He’s a sharp and crisp puncher,” Haye said about Usyk. “A couple of times at the ends of the rounds, he landed some big shots.

“It stiffened you up a bit, but you brushed it off and you got your rest and came back. That’s all you can do. Dereck Chisora didn’t win the Olympic games. He didn’t win the amateur world championship. He never won a world title. This guy has,” Haye said.

Usyk fought the way he always does when facing sluggers. He was on his bike, moving around the ring and looking to use angles for his attacks. It was like watching a bigger version of Vasily Lomachenko. 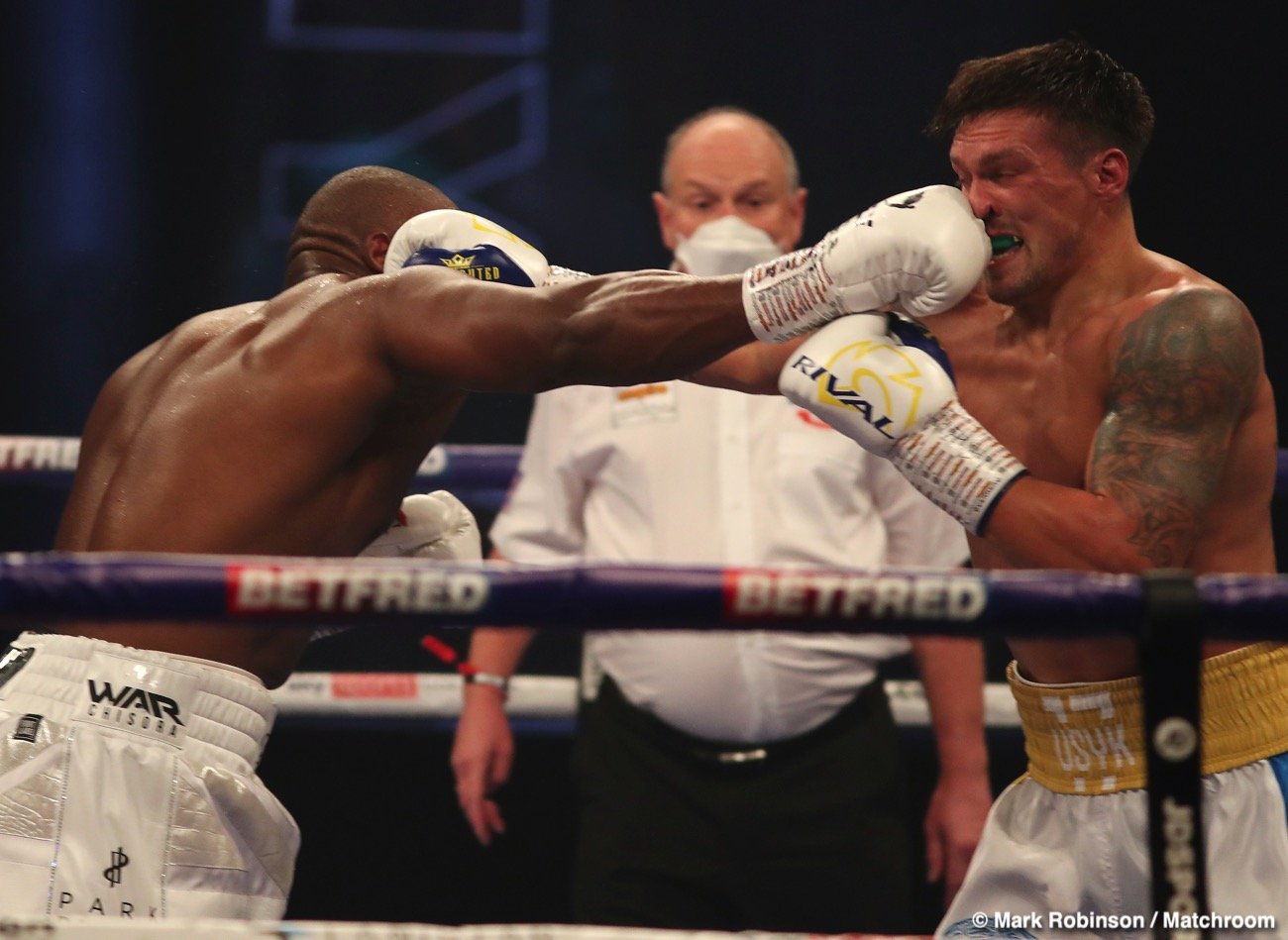 Usyk’s own team head Chisora even

“Everyone says he’s pound-for-pound one of the top five or three on the planet,” said Haye about Usyk. “His own team had Dereck even at the end of the fight.

“His own manager. This is the first time he’s trained hard. This is a starting point for me.

“This is to show people what Dereck is about. He’s only going to get better from here. I’m sad with the result, but I’m very happy with the performance,” said Haye.

Interestingly, Usyk’s team would be willing to admit that they saw the fight even with Chisora. You normally don’t see managers and being so open about their fighters after they win a close decision.

Could it be that Team Usyk was gracious to Hearn and his defeated fighter Chisora out of kindness? It’s possible. 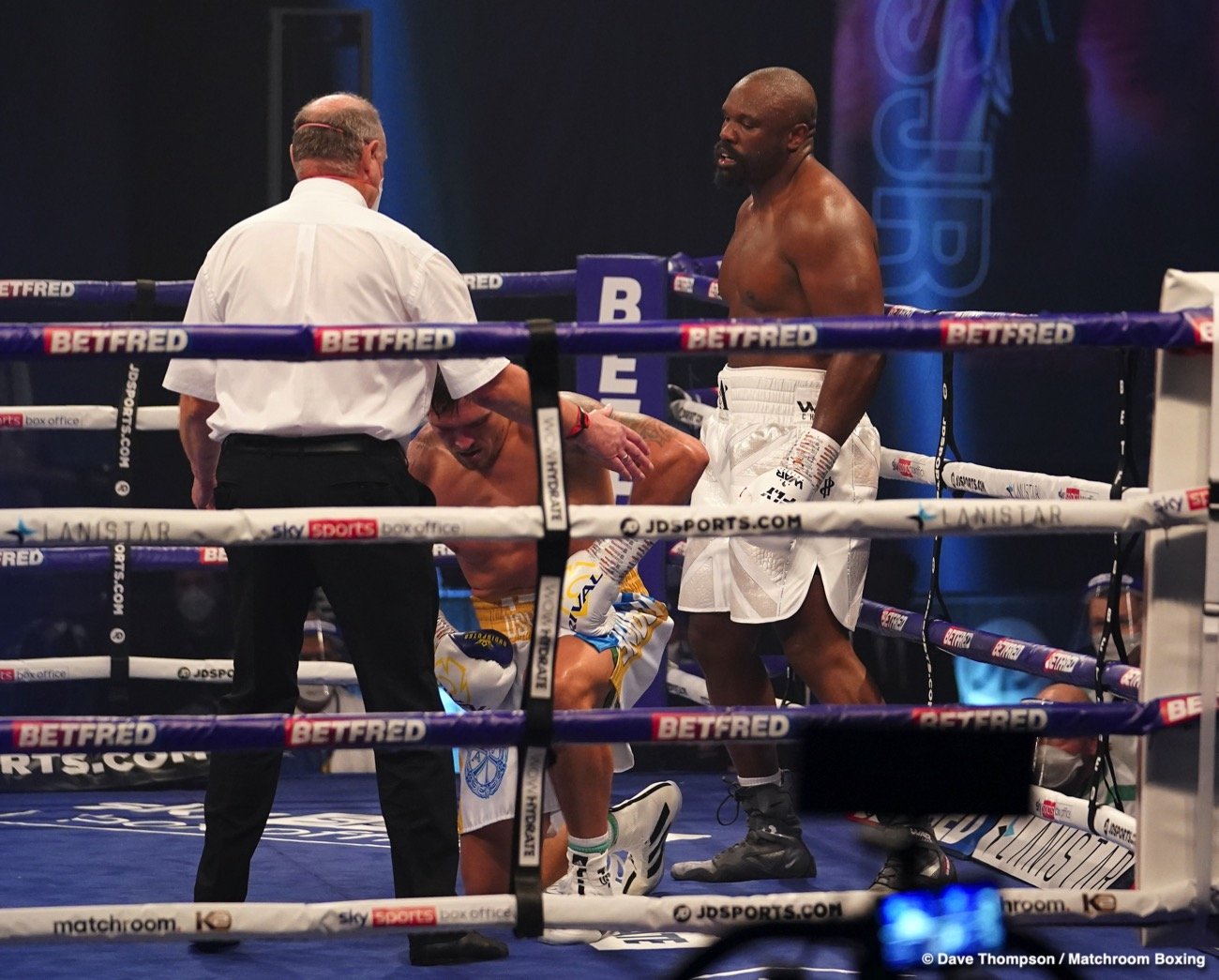 Usyk is going to need to fight a lot better when he eventually battles for the WBO title against Joshua or one of the contenders. Joshua would likely have beaten Usyk soundly if it had been him inside the ring last Saturday instead of Chisora.