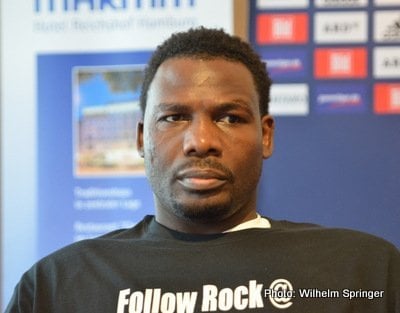 As mentioned before it has been a while since your last fight. When did you start preparing for Povetkin and what shape are you currently in?

Hasim Rahman: I’ve been preparing for this fight for six months. We thought we were going to fight in May, then July, now it is September 29. I haven’t been this ready for a fight in many years. I’m prepared to go twelve rounds, I’m in great condition.

How are you dealing with the time difference between your hometown of Las Vegas and Germany?

Hasim Rahman: It won’t have an impact on my performance. The first time I fought Lennox Lewis it was in South Africa and the time difference didn’t affect me. I will arrive in Hamburg a week before the fight, so within a day I will have adjusted to the local time.

You have been in 60 fights as a professional and fought some of the biggest names such as Holyfield and Lewis. How much of an advantage might your experience be against Povetkin?

Hasim Rahman: My experience is invaluable. This is not my first rodeo, I have performed on the largest stage and know how to keep my focus and how to embrace the moment.

This will be your second fight in Germany. What is your take on the German boxing scene? Do you enjoy fighting over here?

Hasim Rahman: I am a professional and I will fight wherever I have to. Germany has become the hot spot for heavyweight title fights. The fans are knowledgeable and really support boxing. I’m looking forward to wowing them with my performance.

How will the fight end on September 29? Will it go the distance?

Hasim Rahman: No fight at this level is easy, but I know that I am 100 percent prepared and so I am supremely confident. The fight will not go the distance. I will KO Povetkin on September 29.